The Interview is a true gem of Australian cinema, casting Hugo Weaving and Tony Martin who both give excellent performances and directed by Craig Monahan. This is a dialogue-oriented film, the plot moves forward almost exclusively through the interrogation process of a mid-age man suspected of multiple homicides, conducted by an experience hard-boiled officer who is certain for his guilt. The most interesting part of this film is the way that the roles of the cat and mouse are slowly reversing, with the suspect gaining the upper hand and confessing in a rather frigid manner his gruesome acts as well as his motivation.

Even though The Interview contains no action scenes (the film is shot exclusively in the police headquarters and the interview room) it manages to absorb the viewer through its excellent dialogue script and the power of a masterfully-crafted plot. Weaving is as good as one can get, changing his demeanor during the interview process from bewildered and frightened in the beginning to cocky and provocative later. Tony Martin shines through his performance of Det. Sgt. John Steele, giving his character depth and emotional richness contrary to the clichéd portrayal of the cop protagonist in today's crime fiction. If you haven't already seen it you shouldn't wait any longer as the Interview is a movie that you will remember and discuss with friends for the years to come. 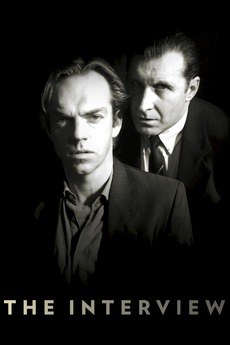