Even better than the first one. 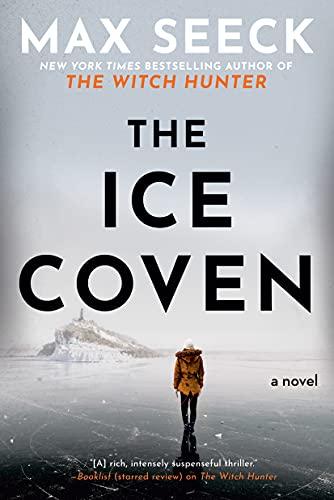 Max Seeck is the Finnish author who made a striking entry into the Nordic crime fiction's hall of fame with his novel, The Witch Hunter, a thriller featuring an intricate plotline mingling elements from both horror fiction and the police procedural subgenre. The protagonist, hardboiled female investigator Jessica Niemi, won the readership's sympathy for her special way of approaching the case in hand and her faceoff with a wicked satanic occult satisfied even the most demanding fans of the genre. In this book, Seeck chose to divulge sufficient background information regarding Jessica's past and the interjected chapters, narrating her adventure in Italy in the company of a nasty man named Colombano, further embellished her characterization.

The Ice Coven is the second installment in Jessica Niemi's saga and it's a radically different book than its predecessor. This time, the horror aspect subsides and the story is relayed through the more conventional police procedural format. There are some additions to the main characters such as the mischievous Helena -"Hellu"- Lappi, the new Violent Crime Units Superintendent and the woman who replaces Jessica's friend and mentor, Erne, as head of the investigative team. There is a visible tension between Hellu and Jessica even from the first pages of the novel that escalates further as the story unravels. We also meet again familiar faces such as Rasmus, Yusuf, and Nina, all seasoned detectives who face their own personal and emotional challenges in the fallout of the previous case.

When two of the most popular Finnish Instagram influencers, Lisa Yamamoto and Jason Nervander, go missing without a trace, Jessica is called to investigate their mysterious disappearance without much to go on. Things will get more complicated when a passing jogger makes a grisly discovery at Aurinkolahti Bay where the body of a young Ukrainian woman is found. The fact that the victim was dressed as a Japanese cartoon character leads Jessica and her colleagues to assume that her murder is inextricably connected with the case of the two missing influencers. As they dig deeper into the matter, they will come across evidence indicating that there are many players involved in the case, including a human trafficking and prostitution ring.

Jessica is on a tight spot as she has to lead the investigation while her boss, Hellu, seems to be hell-bent on finding compromising information concerning her. The two women share a lot of bad blood, even though Hellu's motives are a bit blurry at the beginning and become clearer as the plot moves forward. Moreover, Jessica has to confront Nina's rage stemming from her unfortunate romantic entanglement with Nina's boyfriend, Mikke during the witch occult case that took place a few months earlier. The author makes the reader privy to the protagonist's troubled family history, thus rendering her easier to empathize with. I am expecting that we will get the chance to learn more about Jessica's personal backdrop in the next volumes of the series.

The story evolves through the meticulous police work and painstaking interrogations conducted by all the members of the investigative team. Jessica's singular perception and exceptional discernment ability will shine once again and help her to solve the puzzle before it's too late in a case that involves organized crime, manga art, weird rituals, and sexual perversions. Even though the story can be disturbing in some parts, the effortless writing style and brilliant characterization force the reader to turn the pages until the finale. The last part of the novel is literally filled with surprises and revelations that even the most dedicated crime fiction fans won't see coming. The final twist is one of the most potent that I've encountered in the works of the genre and it will leave you gaping.

To sum up, I think that The Ice Coven is a more mature novel than the previous installment and its merits lie in the author's unique skill to craft a compelling plot while at the same time galvanizing equally fascinating characters who dominate the page with their integrity and plausibility. Seeck seems to be influenced by the master authors of Scandinavian crime fiction like Jo Nesbo, Lars Kepler, and Stieg Larsson and his work so far establishes him as one of the most alluring new voices in the genre. I hope that we will have the opportunity to read the third installment in the series without as soon as possible. Keep in mind that it would be better to read the series in order as you will more easily grasp the relationships between the main characters and the nuances in the prose. I would heartily recommend it to all those who enjoy mysteries set in bleak landscapes and featuring complex characters.