This is a cinema adaptation of the first book in the Joona Linna series written by Lars Kepler, a pseudonym for the married couple of Alexander and Alexandra Ahndoril. The Swedish duo has written seven installments until now and the novels have been a huge commercial success around the world. As I'm currently reading the latest book in the series, titled Lazarus, I decided to watch again the Hypnotist by Lasse Hallström, starring Tobias Zilliacus as Joona Linna and Mikael Persbrand in the role of the titular "Hypnotist", Erik Maria Bark. It should be noted that Hypnotist is the first book in the series and the only one that has been adapted to the cinema screen until now. It has been announced that the second installment, The Nightmare (original title: Paganinikontraktet), will be released soon, perhaps the following year.

The movie retains the basic premise of the book's story and begins with the brutal murder of a whole family that takes place in a quiet neighborhood in Stockholm. Joona Linna, a Finnish detective-inspector of Stockholm's Criminal Investigation Department, is the first officed on the scene and he finds the father, mother, and daughter slain in their home. The only survivor is the little son, Joseph, who is immediately transferred to the hospital as he is also severely injured. The boy is the only living witness of the slaughter, so Joona is desperate to talk with him in order to learn something about the culprit's identity. Unfortunately, though, Joseph seems to be unresponsive, so Joona calls Erik Maria Bark a doctor who is famous for treating acute trauma through hypnotism. Erik is initially reluctant to hypnotize Joseph but Joona's insistence forces him to act.

At the same time, we take a peek of Erik's family life in his house where he lives along with his wife, Simone (Lena Olin) and little son, Benjamin. Erik has a hard time sleeping and he takes some very strong sleeping tablets, something that makes Simone despises and adds tension to an already strained relationship. One night, an unknown perpetrator will invade the Bark household and abduct Benjamin after injecting Simone with a powerful sedative drug. Joona will quickly realize that there is a connection between the family murder and Benjamin's abduction and he will have to use his detecting skills to find out the identity and save little Benjamin's life as well as Erik and Simone's marriage.

There are some major differences between the novel and the film especially as far as the plot is concerned, nevertheless, that doesn't mean that the movie doesn't succeed in capturing the source's mood and atmosphere. The performances by the main protagonists are excellent and Tobias Zilliacus is a very fitting choice in the role of Joona as both his physique and expression match the descriptions of him in the books. Mikael Persbrandt is an actor who can play any role with the same offhandedness, while Lena Olin is more than convincing as the despaired, grieving mother who is ready to do anything to get her son back.

The Hypnotist may not be the thriller movie that you will never forget, nevertheless it is a highly entertaining, exciting ride from the beginning until the end. The fans of Lars Kepler will love it and the same is true for the fans of Scandinavian crime/thrillers. Lasse Hallström is one of the most experienced Swedish auteurs and it would be nice if he continued to direct other silver screen adaptations of the Ahndoril duo's work. In these times we live in, we need films that will make us forget what is happening around us and captivate our imagination. Give The Hypnotist a try and you will not regret it. 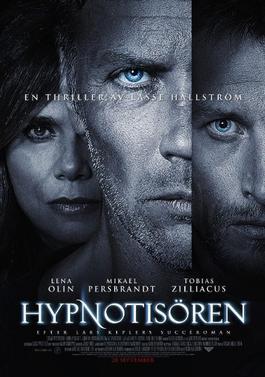