Not comparable to the author's previous work. 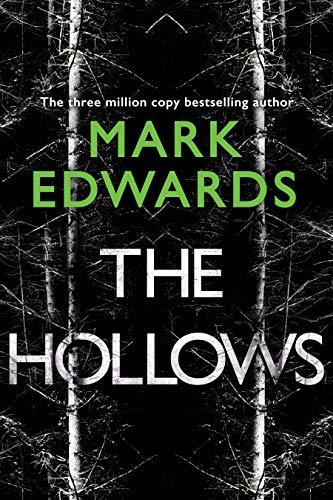 This is the latest novel by the guru of domestic thrillers, Mark Edwards, who has delivered several first-class, neatly plotted mysteries such as The Magpies, The House Guest, and The Retreat. The English author knows well how to create suspense and keep the reader on tenterhooks through his meticulously crafted plotlines which are filled with distractions and red herrings that make them all the more irresistible, while the final explanation is always unforeseen and shocking. I am a major Edwards fan and I always keep an open eye for his most recent releases, so I was thrilled to learn about the publication of The Hollows, a novel much reminiscent of the author's previous work in terms of atmosphere and overall mood. Unfortunately, the story in this one is simple and predictable, even if there are some elements, mainly having to do with the pacing and the buildup of the plot, that deem the title worthy of the readership's attention.

The story is set in the U. S. and more specifically in a camping resort deep in the woods of Maine that carries a dark history and where the air is thick with paganist deities and animistic theories. The eeriness of the setting is evident even from the first pages of the book where we meet the protagonist, Tom Anderson, a music journalist who travels from England to America in order to reunite with his teenage daughter, Frankie, who lives permanently in the States along with Tom's ex-wife. It is only in the second or third chapter that Tom meets David and Connie, a couple of true crime podcasters who inform him of the grisly past of the place. Nearly two decades ago, in 1999, two schoolteachers had been brutally murdered in the woods near the camping site. Even though the evidence pointed to a lonesome, weird individual named Everett Miller, the police never arrested him as he disappeared into thin air.

As it happens, this crime generated a number of legends concerning the true whereabouts of Everett who is believed to still inhabit the woods, determined to scare off all the tourists who are oblivious of the place's unique history. Everett was an outcast at the time, considered a weirdo in his school because of his obsession with Norwegian death metal and his eccentric physical appearance. The locals don't want to talk about him or the murders as it seems to be a sore spot for the whole community. Thus, as Tom begins to take an interest in this old case, he is treated suspiciously and the people he talks to often exhibit a hostile attitude when they realize that he is poking around the events of 1999. His daughter Frankie, along with David and Connie's son, Ryan, take a trip to the secluded town of Penance, a godforsaken place with few residents who nevertheless are vile enough to cause problems to the two friends. After a disturbing meeting with some Penance teenagers and a cheeky Instagram post, Frankie and Ryan will become haunted as it seems that there are people who wish them harm.

The story is narrated mainly through Tom's and Frankie's perspective while there are some interjected chapters in which we follow the story of an unnamed man who chronicles his meeting with a local hippie woman who initiated him in the mystifying world of animism. The character is of key importance to the story as it becomes obvious in the final part of the book. The revelation of his identity is a bit disappointing as it is easy to guess early on who he truly is. There are not many characters featured in the story, so it is easy to pick the most likely villain from the first part of the novel. There are some attempts made by Edwards to muddy the waters and delude the reader, but I found them to be half-hearted and easy to track, especially for the readers who are loyal aficionados of the genre. The ending is predictable, lacking any shocking value and the denouement leaves the reader with a bitter taste, wondering where Mark Edwards' brilliance had vanished.

The Hollows is a light, quick read that you can complete in two sittings and, despite the flaws I mentioned in the previous paragraph, it is not a bad novel per se especially if you are looking for a fast-paced thriller featuring creepy locales and bizarre characters. It is definitely one of Edwards' most underwhelming writings and readers who are not yet familiar with his body of work should turn first to his most acclaimed novels that made him one of the most popular and successful English crime fiction authors. I was expecting much more by a writer of his caliber and I hope that his next writing endeavor will be comparable to his gems which I cited in the beginning of my review. Fans of Stephen King will observe certain similarities between him and Edwards in terms of setting and ominous vibes exuded by a certain haunted place. Read it if you are into thrillers with a touch of horror and avoid it if you are seeking dense plots and fully-fleshed characterization.