The Hitman's Guide to Housecleaning

A humorous tribute to the land of Ice and Fire. 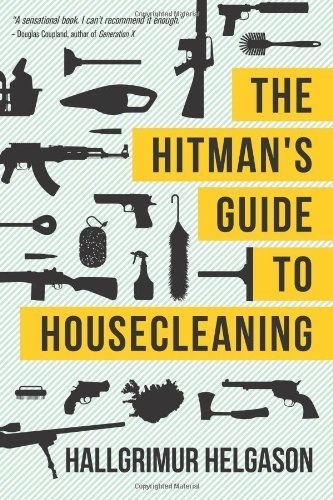 Hallgrimur Helgason is a multi-talented, brilliant Icelandic author, who wrote the popular 101 Reykjavik, another elegy to the country's capital city. Apart from writing, he is also a painter, translator, cartoonist, and essayist. 101 Reykjavik was adapted into a movie in 2000 by one of the most prominent, contemporary Icelandic directors, Baltasar Kormákur, starring Victoria Abril, Hilmir Snær Guðnason, and Ólafur Darri Ólafsson. Helgason has won the Icelandic Literary Prize in 2001 for his book, Iceland's Author (original title: Höfundur Íslands), and also won a nomination for the same prize in 2005 for Rokland (Stormland). A Hitman's Guide to Housecleaning is a wonderful attempt at combining the comical element with a hard-boiled crime story, as the protagonist, Tomislav Bokšić, or Toxic as he is known in the underbelly of New York City, is a Croatian hitman who works for a ruthless gang and kills people for a living. In the first three or four chapters, Helgason introduces his intriguing protagonist and there is a lot of background information about him.

Nevertheless, the real story sets off when Toxic kills an FBI agent and it is necessary to leave the U.S. as the feds are crawling through the city, searching for the culprit of their colleague's brutal assassination. Due to a mistake, he makes in the airport, where he is under a lot of strain as two sinister-looking policemen in civilian outfit haunt his steps, making him feel kind of panicky, Toxic ends up killing a pastor in the airport's restrooms and assuming his identity. The deceased intended destination, however, is Reykjavik, Iceland, and Toxic is forced to travel in the remote, graceful natural landscapes of the land of Fire and Ice. When he finally gets there he will have to pretend that he is the dead pastor from America and that's something that will cause him many embarrassing moments throughout his first interactions with the local people. In the process, Toxic will find himself in his usual state and he will be once again on the run when his deceits and trickeries are one by one revealed.

For the most part, the narration focuses on Tomislav's character who is the main protagonist and the only, first-person, narrator of the story. Toxic's personality has been shaped and defined by his involvement in the Yugoslavian Wars, from 1991 to 2001, which led to the breakup of the Yugoslav state, as a young Croatian soldier who is sent to kill or be killed, without any further explanations from the authorities or the politicians. Moreover, Tomislav lost both his father and elder brother during the war and he is often plagued by well-buried guilt and remorse over his own actions at the time.

Toxic is a truly compelling character and following his voice throughout the novel's 250 pages is quite a ride. His remarks and comments about the Icelandic customs and morals, that he gradually begins to integrate and comprehend, are hilarious to say at least and at the same time, through his solo narration, the reader indulges in the book's fabulous descriptions of today's Icelandic lifestyle. If you manage to finish this book and not desire to visit the faraway island. then there is something wrong with your reading comprehension. A Hitman's Guide to Housecleaning, first published in the Icelandic in 2008, is one of the most whimsical and playful novels that I've read in the last few months and provides a basis for another successful cinema adaptation. I hope that Baltasar Kormákur will scout out this little gem and deliver an engrossing film.

The Hitman's Guide to Housecleaning