"It's a matter of perception".

From the creative duo that delivered the Oscar-Nominated for Best International Foreign Film (2020) Corpus Christi (original title: Boze Cialo), the director Jan Komasa and screenwriter Mateusz Pacewicz, comes The Hater, a film that has also been awarded the prize for Best International Narrative Feature in the 2020 Tribecca Film Festival, despite that year's cancellation of the ceremony due to the Covid-19 restrictions. The jury selected this Polish underappreciated gem due to its low-key atmosphere, the thorough outlining of the protagonist's disturbed persona, and a storyline that treads on several themes such as the emergence of hate culture online, mainly originating from the social media, the manipulation and exploitation of masses through shady tactics employed by PR professionals whose job is to initiate smear campaigns, spreading lies and hurling false accusations against their targets, and the decadence of politics in the Western world, being reduced to mere image management and propaganda. However, above everything it's a story about a protagonist, Tomasz Giemza (Maciej Musialowski), who exhibits explicit sociopathic tendencies that are channeled through his vocation as a professional saboteur and provocateur on behalf of a firm whose objectives are far from clear except for the fact that they thrive on deception and duplicity that constitute the basic tools with which they tend to do business.

The most apt description for The Hater was written by Steve Pond in his review of the film that was published in "The Wrap" website (‘The Hater’ Film Review: Polish Drama Shows Off a Social Media Sociopath (thewrap.com)) on July 29, 2020. Pond reflects on the film's essence, condensing the message it communicates to the audience, as follows: "it's a story about terrible things done quietly". It is a spot-on synopsis of Komasa's motion picture as Tomasz, far from being a type of psychopath akin to Patrick Bateman from Bret Easton Ellis's American Psycho, a well-known fictitious character with tangled references to the use of extreme physical violence and overall erratic behavior, prefers to move in the shadows and attain his goals by insidious means, most often involving blatant lying and attempts to manipulate people for his own, personal gain. His understated exterior presentation is always civilized, and he comes across as polite, at times even sympathetic, among his circle of acquaintances, either in the professional or personal field. His calm demeanor dupes the people close to him who fail to acknowledge Tomasz's dark side which is manifested solely during the times when he sits alone at home, frenetically typing in his keyboard, spreading fake news or organizing crusades of treachery aimed to harm his clients' opponents. Tomasz harbors feelings of resentment towards many as his humble class background is sneered at by the members of the elite and this "class-war" aspect, whereas not "loud" in terms of narrative focus, is reminiscent of films such as Bong Joon Ho's acclaimed Parasite (2019).

The story commences with Tomasz being kicked out from law school as penalty for plagiarism. In this first scene, we watch as the protagonist is summoned by his tutors in order for them to announce their decision to drum Tomasz out of the University and there we get a first glimpse into the characters's disposition. The only thing that he can laconically retort to the storm of accusations uttered by the department's managers is this: "It's a matter of perception". Tomasz's attempt to reduce the significance of his transgression by resorting to a catchy phrase with definitive references to a radical form of moral relativism is indicative of the way that he will keep on justifying his unethical actions to himself in a way which deflects feelings of remorse or the possibility of reconsidering his theretofore decisions when they prove to be disastrous. Tomasz is Machiavellian in his reasoning, and a firm believer in the Nietzschean "death of god", namely the absence of fixed standards that could offer a solid ground of discerning right from wrong. Within this cynical context, the protagonist will gradually move up the ladder in the company that he works for, and he will soon become the personal favorite of his boss, Beata (Agata Kulesza) who is perhaps the only person in the entire film that sees through Tomasz and is aware of the full extent of both his skills and propensity for iniquity. The relationship between Tomasz and Beata is one of the most intriguing aspects of the overall characters' interplay in the movie and the final scene that they share brims with acrimony, bringing to an end a fruitful collaboration.

Tomasz is financed by his uncle and aunt, Robert Krasucki (Jacek Koman) and Zofia Krasucka (Danuta Stenka) respectively, who help him study in the Law school for reasons that are unclear to the audience, at least at the beginning of the film. Robert and Sofia have a daughter, Gabi (Vanessa Aleksander) with whom Tomasz is secretly enamored since his teenage years. Gabi was never interested to know Tomasz and her rejection remained a thorn on his side for several years. At least now, bearing the status of a university student, Gabi seems to take sort of an interest in him and a relationship is gradually built during the first half of the film. However, their brief flirtation period comes to an abrupt end when Gabi reveals to her parents that Tomasz had been kicked out from law school, something that he had secretly confided in her with the promise not to tell anyone ever. Gabi's betrayal further fuels Tomasz's feelings of misanthropy and rancor, making him all the more determined to succeed in order to be able to get his revenge some day in the future. Professionally, Tomasz is hired by a company specializing in the organization of political campaigns for candidates, however the true aim of the organization is to tarnish the reputation of certain candidates to favor their opponents, that is the company's clients. As a mayoral election is in order in Warsaw, the company's staff is hired by a right-wing politician to besmirch his primary adversary's personality, belonging to the liberal and soft-speaking Pawel Rudnicki (Maciej Stuhr).

Tomasz will be drawn into the vortex of a game of deception, acting as a kind of double agent, openly endorsing Rudnicki's campaign and set of values, while at the same time sabotaging the candidate's rally through a series of well-organized actions in the web, utilizing the power of social media to penetrate the candidate's defenses both in his private and public life. In his crusade, he will even seduce Rudnicki who is rumored to be a closet-homosexual, after spiking his drink with an upper, in a truly memorable scene in which Maciej Musialowski dances with an unconcealed femininity that leaves a strong impression to the audience due to its authenticity, indicative of the actor's wide range of performing skills. Musialowski's portrayal of Tomasz is impeccable, an invaluable asset to the film in its entirety, retaining his cool game face during quotidian encounters and displaying his true self in the instances when he is alone, plotting and scheming. He is a character out of the ordinary and I cannot off the top of my head remember a cinematic sociopath sharing the same hallmarks as his. Vanessa Aleksander is a seductive presence, and her natural beauty is further adding to her character's appeal, while Maciej Stuhr as mayoral candidate Pawel Rudnicki manages to ascribe a veracity to his character, stealing the limelight in the scenes that he appears. The rest of the casting crew is doing a solid job and performances are certainly a big plus for The Hater and an important aspect to consider when assessing the movie's quality level.

Perhaps, the film could have been a bit shorter as there is an awkward time gap occurring between the ending of the first act and the beginning of the second, with the story remaining still and the audience simply watching the characters interact in a rather non-meaningful manner. Apart from that, I cannot pinpoint a major flaw in The Hater that is one of the most enticing titles currently available on the Netflix catalogue of movies. This film is a kind of follow-up of Jan Komasa's 2011 Suicide Room (original title: Sala samobójców), the Polish director's first full feature-film, that explored similar themes, though from another perspective as the protagonist in the first movie was a victim of online bullying that marked his life forever. The movie's second part, after the aforementioned dragging interlude, picks up the pace and the story culminates to a bloodbath of a finale with fate reserving a special place for Tomasz who in the end is re-baptized as a hero, regardless of the fact that the whole massacre was of his own making. This highly ironic, some may even say cruel, denouement is at first experienced as a shock, but as the viewer distances himself from watching and has a minute to think, is a hell of a conclusion for a film of such idiosyncrasy. I think that this is a movie that ought to be wider known as it debates critical cultural issues in regard to the rise of the so-called "hate culture" on the Internet, a subject that has many variables and will become even more relevant in the years to come. Watch it today. 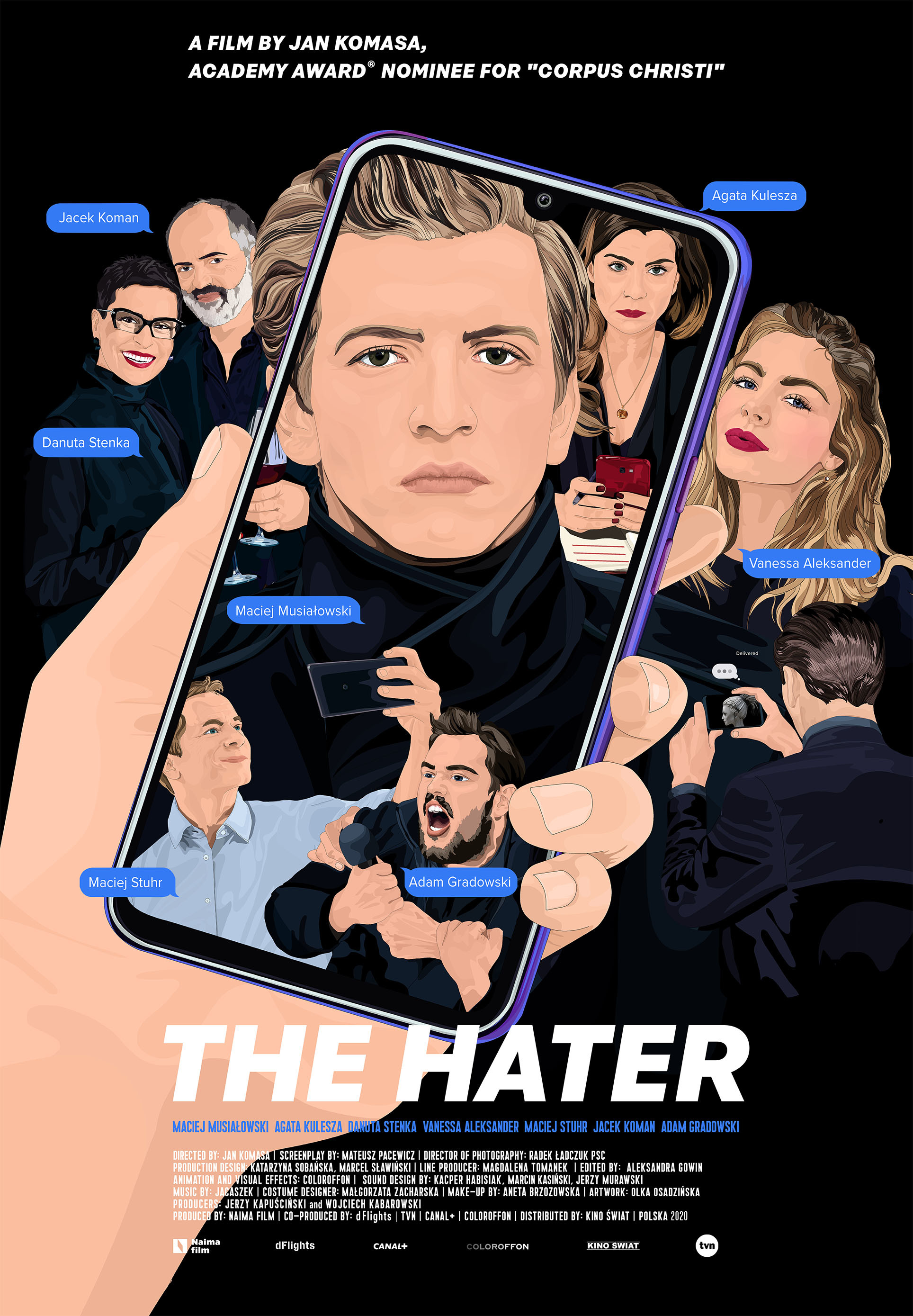