An audacious experiment by Christoffer Petersen. 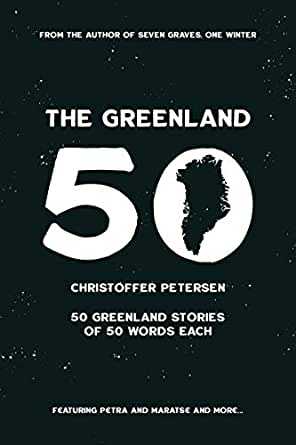 Many readers know Christoffer Petersen as the Danish author who likes to set his crime/thriller novels in the far north and more specifically in Greenland, the world's largest island which is located between the Arctic and Atlantic oceans. Petersen has written many series of books, some of them featuring Constable David Maratse, others Petra Piitalaat Jensen, or Konstabel Fenna Brongaard, and all of them have won the readers' hearts as the immense power and allure of the Greenlandic harsh landscape constitutes the key factor that makes his work to stand out among the majority of the other Nordic crime authors. Greenland is a special country with a population of a little over 55.000 people, most of them being the indigenous Inuits, and its capital city, Nuuk, is considered to be the world's smallest capital with a population of around 18.000 people. The weather conditions are so bleak that force the locals to live in constant daylight in the summer and in total darkness during the long winters. As one can imagine, this isolated part of the world can be used as the perfect setting for a gloomy crime story to unfold and Petersen, who lived in Greenland for seven years along with his wife, knows exactly how to take advantage of the feral scenery and incorporate it in his well-crafted thrillers.

In The Greenland 50 however, Petersen takes on a bold experiment of compiling 50 short stories of 50 words each in one book. In his introduction, the author writes that "the form is inspired by the late British science fiction author Brian Aldiss" and he also mentions that these short stories are not standalone ones as "knowledge of the characters, plots, and places in my books is required if you are to enjoy them to the full, and, sometimes, even understand them". So, this is not a compilation that is recommended for those who are oblivious of the Danish crime writer's body of work, nevertheless, it can be read as a particular literary experiment by those who are interested in reading something different, an exercise in choosing meticulously a limited number of words in order to write a story with a beginning, middle, and end. Some of the stories are better than the others and many of them succeed in moving the reader emotionally and provoking strong feelings. Below there is a list of my fifteen favorite short stories in this collection. Keep in mind that the choices are mine and according to my own literary taste.

Greenland by the Numbers Book 1