When I first saw Paolo Sorrentino's The Consequences of Love, I thought that this was his best film and I didn't expect that there would be another one like it in terms of quality, storyline, photography, and performances. But I was wrong. The Great Beauty (original title: La Grande Bellezza) is Sorrentino's magnum opus, a spectacular visual elegy to the eternal city of Rome as well as a social commentary on the decadence of upper-class social life. The true protagonist of the movie is Rome, a city marked by its ambiguity and multiple semantics. In Sorrentino's fictional universe, Rome is a metropolis that gives birth and at the same time crushes human ambitions and dreams under the veil of endless pointless discussions and interactions between the film's characters. The Italian master auteur focuses on Rome's higher social circles and in the first scene of the movie we watch as a massive fiesta takes place on screen and where we see a vast crowd dancing and laughing enveloped in their cocoon of upper-class social status and celebrity culture. It is at this party that we meet the protagonist, Gep Gambardella, a once-upon-a-time novelist who has written one book forty years ago and nothing ever since. Gep attends many similar parties and he is consumed with this particular lifestyle as he is growing older. His life experience so far has made him a cynic and in some dialogues, he proves to be rather tough with people who attempt to insult or downgrade him (the best example is the excellent roof scene). Gep also likes to wander around Rome where he meets old friends, casual acquaintances or even movie stars like Fanny Ardant. When he hears about the premature death of his childhood amore, Gep will begin to reassess his life, contemplating his past, the missed chances, the mistakes, and the desire to write will resurface.

Toni Servillo has to be Sorrentino's favorite thespian as they have collaborated before in masterpieces like Il Divo and The Consequences of Love. Servillo delivers his most stellar performance ever in The Great Beauty and attributes such a cerebral mentality to his character that makes Gep one of the most memorable characters in the contemporary Italian cinema. There is something Fellini-like in both the film's cinematography and characterization even though in an interview he gave, Sorrentino, stated that he respects Fellini too much to say that it was an influence. Nevertheless, one could easily imagine Marcello Mastroianni in the role of Gep and overall mood and tone of the film are heavily reminiscent of Fellini's Dolce Vita. Of course, that doesn't mean that Servillo is not the most appropriate choice for the role of the protagonist as he is definitely on the top-5 of the best Italian actors of all time. Apart from Gep, there are many secondary characters in the film and all the actors give their best, elevating the film's overall grandiosity to sky-high levels.

The photography is magnificent, perhaps one of the best I've ever seen on the silver screen, and there are many imposing shots of Rome's elegant beauty. This elegance is pitted against the decadence and vulgarity of the city's aristocracy which is satirized in a brilliant comical manner by the director who is also the screenwriter. The comical aspect is partly present in The Great Beauty and it is counteracted by Gep's somber remarks on a number of themes, such as artistical inspiration, death, modern art , and, of course, the meaning of love. At the end of the film, when he is asked why he hasn't written anything for more than four decades, Gep admits: "All of my life I've been searching for the great beauty but I never found it". This overarching sense of futility permeates the film as a whole even though the final moments offer -perhaps- a fading glimmer of hope for Gep and for the audience as well. I believe that this is a film that the viewer has to see more than one time as there is a lot to process and grasp. I saw it two times and I think that I will do it again sometime in the near future as I was stunned by this film. Yes, it is true that Sorrentino has this effect on audiences and that is the reason why he is the best European director of our time. But be warned: this is a slow-moving film, a film that demands the viewer's full attention and it is not recommendable to those who ask for quick, cheap entertainment. Be ready to devote yourselves to the movie and you will be profoundly affected by this Italian gem. 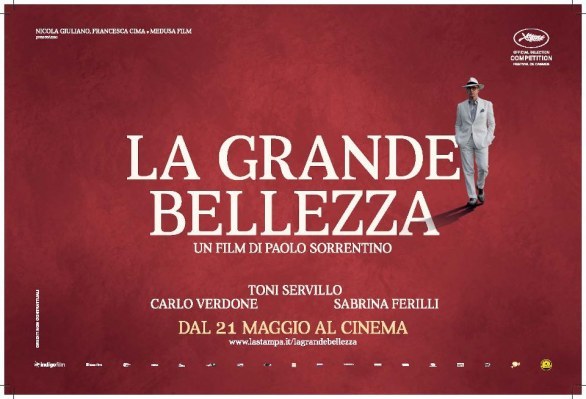