It lives up to the hype. 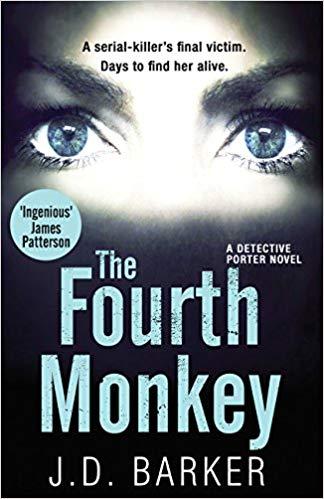 This book is one of the most discussed crime/thrillers of the last few years and it should be noted that it is the first installment in the "4MK" trilogy which continues with The Fifth to Die (#2) and concludes with The Sixth Wicked Child (#3). J.D. Barker is an author who is not afraid to dive deep into the genre and recently won critical acclaim with Dracul, a novel on Bram Stoker who was written in collaboration with Dacre Stoker, the great-grandnephew of Bram. The Fourth Monkey is an exciting and enticing read, a thriller that you cannot put down as the plot is so well-conceived and narrated intriguingly as we see the story unfolding through the eyes of multiple points of view, one of them being that of Porter, the detective protagonist who is in charge of the "Fourth Monkey Killer" investigation and another the diary of the serial murderer where he narrates his -highly disturbing- childhood memories.

4MK is a serial killer who haunts Chicago Metro for the last five years and his victims are tortured and mutilated before they die. Each killing follows the same ritualistic sequence of events: first, the killer sends a little box with the victim's ears in his/her family, then the eyes and finally the tongue. We are familiar with the image of the 3 monkeys who symbolize the concepts of blindness (See no evil), muteness (Speak no evil) and deafness (Hear no evil). But there is also a fourth monkey who the killer interprets as the one commanding "Do no evil", so in the fourth and final stage in his ritual, he kills his victim who is usually found after many days by the police. 4MK is an intelligent villain who never leaves any clue behind and always seems to be one step ahead of Porter's investigating squad.

When a man throws himself in front of a bus, the police initially believe that he is the 4MK killer. The evidence that Porter and his team collect at the crime scene suggests that he has captured the last victim, a teenage girl, Emory, who is held captive somewhere in the city having her ear torn off. Thus, Porter will have to race against time to find the girl and close the case once and for all. But there are a lot of twists and surprises on the way that constantly overturns what the reader considers as truth. The Fourth Monkey is a crime novel that is based on its intricate plot rather than aspects such as characterization or dialogue and shares a lot of similarities with some very popular and successful Scandinavian crime fiction authors such as Jo Nesbø, Samuel Bjørk, Lars Kepler, and Stefan Ahnhem. Porter is a detective who is close terms of characterization to Harry Hole and Mia Kruger, a hard-boiled police officer who is obsessed with his job and never leaves a case without solving it. He is also a grieving man who recently lost his dear wife, Heather, who was shot dead during a robbery in a store. Perhaps this plot thread will be developed further in the other books in the trilogy.

The cat-and-mouse game with the 4MK is truly intriguing and there is a big twist near the ending that, even though I have to admit that I predicted, adds to the story's ingenuity and shocks the reader. The many twists and turns in the story keep the reader alert and eager for more and I have to admit that immediately as I finished this one, I purchased the second novel in the series (The Fifth to Die). Barker succeeds in creating an absorbing story that in many ways adopts many of the genre's overused tropes, nevertheless retains its originality and singularity. This is a book that you will remember for some time after reading it and the lasting impressions will be more than satisfactory. I am seriously considering starting immediately the #2 in the trilogy. My rating is closer to 3.7-3.8/10.