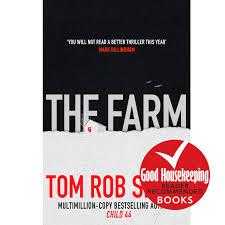 The Farm is a crime/mystery novel, written by Tom Rob Smith (Child 44, London Spy, American Crime Story) and it is a book I finished in one day (two sittings), something that rarely happens to me. I was immediately drawn to the story which begins when Daniel, being one of the two protagonists/narrators and living in London, gets a call from his father (Chris) who has recently moved permanently to Sweden with his wife, on an isolated farm somewhere in the countryside. Chris says to Daniel that his dear mother is committed to a mental clinic after a psychotic breakdown, full of paranoid delusions and having no connection with the reality anymore. The mother, Tilde, manages to get out of the hospital and takes the plane in order to meet Daniel and tell him her side of the story, about a massive conspiracy in which her husband and Daniel's father is involved, along with many other residents of the small village that she is now living. Daniel will have to listen carefully to his mother's account and try to discern the truth in her story if there is any, and then decide what he is going to do. Take his mother to the hospital or to the police station to tell the authorities her story? Is she a reliable or unreliable narrator?

The first half of the novel is about Tilde's narration of the strange events that started happening when she and Chris moved to Sweden, which if properly combined, shape a larger picture that reveals the grim reality of corruption, xenophobia and -possibly- murder in the small community. In the second part, we read about Daniel's journey to Sweden in order to find himself the truth about his mother's accusations. The finale is dignified, with a nice plot twist, and acts as the best ending to a compelling and suspenseful plot.

Tom Rob Smith's prose is simple, without being simplistic, and immediate so the reader keeps turning the pages in this rather long novel (more than 400 pages) which can be read even in one sitting. It will mainly appeal to the fans of literary and crime fiction as well as to anyone who enjoys a well-narrated mystery story.