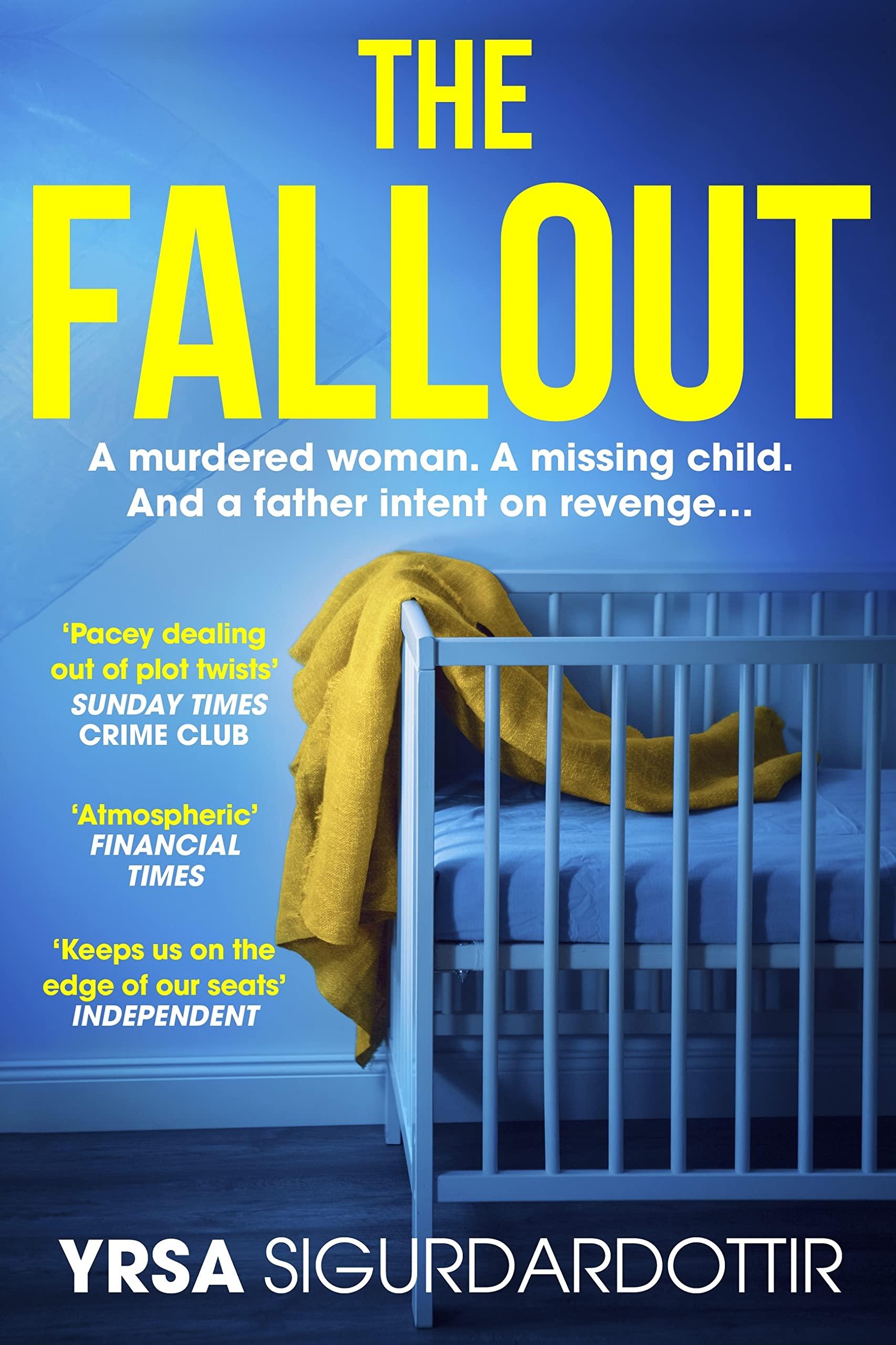 This is the concluding chapter in Yrsa Sigurðardóttir's renowned "Children's House" series and one of the best novels in the Huldar and Freya saga alongside The Legacy (#1) and The Doll (#5). The Icelandic author reminds us once again the reason why she has earned the title "Queen of Icelandic crime fiction" as she weaves a complex storyline featuring multiple plot strands which is narrated through the perspective of various characters who are all equally significant for the novel's plot. The Fallout is a first-class police procedural with some thriller sprinklings that make the story irresistible, a novel that will remain in your mind long after finishing reading partly due to its stark prose and partly because of the ever-topical themes which are explored in the course of the story. The most prominent motif of the novel is surrogacy and its consequences for the parties involved, a subject that has been a matter of heated debate during the last few years because of the growing number of individuals who choose this controversial way in order to become parents. Nevertheless, more relevant themes are put under the author's microscope such as the negation of a significant part of the population to get vaccinated against debilitating diseases that could become extinct if only people behave more responsibly in regards to the protection of public health, an issue that became prominent during the last two years of the Covid-19 pandemic leading to an ongoing discussion about the obligations of the citizens who vehemently deny vaccination. The tempo is even and after the first half, a sequence of twists turn the reader's initial assumptions upside down and force him to take a whole new look at the case in question which becomes increasingly enigmatic and mysterious.

The chilling, wintry Icelandic landscape frames the narration of a labyrinthine investigation and the main focus is on the two protagonists, CID detective Huldar and child psychologist Freya, who, for the first time, work together at the police headquarters. Nevertheless, there are more characters that play a vital role in the revelation of the truth such as the commander in chief Erla, who is pregnant and constantly in a bad mood, the insecure Gudlaugur who is a good trooper but lacks the proper initiative to climb the ranks and prove himself to his peers, and the rookie officer Lina who helps in any way she can despite her inexperience and shortage of assignments given by her superiors. Freya has to deal with Erla's wariness as her professional capacity as a psychologist is not much respected within the realm of the Criminal Investigation Department. The relationship between the two women is cold, to say at least, and Freya feels always on edge trying to justify her presence in the department. Her contribution will prove to be once again critical as her ability to look deep into the souls of witnesses, suspects, and victims is a valuable tool in the hands of the investigative team. The complicated relationship between Huldar and Freya is at a standstill and the two of them seem to have settled for a "friends with benefits" liaison that suits them both perfectly. Readers who are familiar with the previous installments are aware of the turbulence that marked their affair throughout time and as this is the swan song of the series, we get to see the finale of their linkage.

As always, Sigurðardóttir begins the first chapter with a breathtaking scene of a baby girl, Mia, getting snatched from her pram in broad daylight in a suburb of Reykjavik. Mia's disappearance took place eleven years prior to the time in which the main story unfolds and becomes a pivotal plot point in the second half of the book, the case being linked to the current investigation in a way that becomes clear later on. In the second chapter we go back 5 months and we meet a young couple who lost their teenage daughter, Iris, from the disease of measles, a protracted and unmerciful. The father seems to be hell-bent on getting revenge from the man who infected his daughter with the virus that led to her demise. His character will become an integral part of the story as he becomes the prime suspect in the bizarre case of the murder of a young woman who is found mutilated, the head missing, in the trunk of a parked car in a quiet neighborhood of the city. Erla and Huldar, who are the first officers on scene, will very quickly assume the identity of the mangled corpse as everything points in a certain direction, leading the authorities to think that the victim is Briet, a young student in the field of public health who vanishes from the face of the earth. But, beware as there are lots of surprises in store for the reader who embarks on a rollercoaster of red herrings and misinformation from the author who keeps the cards close to the chest and gradually discloses the truth in a way that only the patient reader who is determined to get to the end of the novel will be thoroughly rewarded.

Mia's disappearance a decade earlier and the murder of the young woman found in the car's trunk will become linked as the investigation moves forward and the team realizes that in this case nothing is what it seems. Even though The Fallout would certainly fall under the category of the classic police procedural, it is the plot's density and the exquisite writing style of the author that makes the novel stand out from the works of the (sub) genre. Sigurðardóttir's maturity in terms of storytelling and characterization is evident even from the first pages and there were many times that I found myself devouring each and every word of a chapter for the sheer literary pleasure of it. Furthermore, the balance between Huldar's role and that of Freya's is restored after the previous volumes in which Freya was kind of sidelined, the emphasis given more on Huldar and the investigative team. Perhaps it is the fact that in this novel the two of them work under the same roof and they are members of the same team that helped in this direction. The mystery element is stronger than ever as the reader never ceases to guess and surmise regarding the who and whydunit. The plot is crafted expertly as it always happens with the works of the Icelandic queen of crime fiction and there are no holes or unanswered questions after the denouement of the story. In my opinion, in The Fallout, Sigurðardóttir delivers a masterclass on multiple perspective narrative and makes the juggling of the various points of view seem effortless, almost natural. There is not a single redundant word in this novel and everything written by the author has its place in the overall narrative.

I think that this is the crown jewel of the series and the more well-rounded novel of the six, bearing the signature of one of the giants in the Nordic crime fiction. The Fallout doesn't fall short on any account and draws strength from the author's immense talent which shines once more, bringing back memories from my first encounters with her work and the Þóra Guðmundsdóttir book series. Even though, I have to admit that I am one of the few that prefer the Þóra's novels due to their eeriness and kinship to the horror genre, I can find no overt flaws with the "Children's House" series. On the contrary, I think that they offer a plausible variation of the typical police procedural that often rings hollow because of the repetitive tropes and the lazy, dreary writing. Yrsa Sigurðardóttir belongs to the heavy artillery of the Icelandic crime fiction and in terms of quality and exerted influence her work can only be compared to that of Arnaldur Indriðason, the purported "King" of the genre in the land of fire and ice. Today, Sigurðardóttir is writing the second novel of her new series that will be completed in four parts and soon the English readership will have the opportunity to read her latest standalone, titled The Prey. I would wholeheartedly recommend The Fallout to all Nordic crime fiction aficionados and specifically to those who enjoy their mysteries to be set in exotic landscapes. It is a rich reading experience and a fitting to ending to the series that solidified the author's reputation as one of the best among her peers. I cannot wait to get my hands on her next outing whether it is a standalone or a part of a series. If I had to rate this book I would give it a solid 4/5.