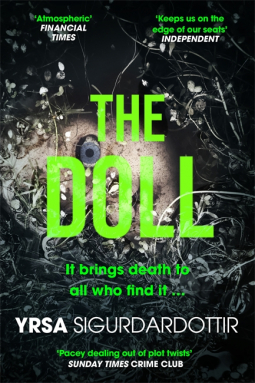 Yrsa Sigurdardorttir is one of my all-time favorite authors and her work introduced me to a whole new landscape, that of Iceland's, as well as compelled me to search and learn more about the country's history and cultural heritage. I sincerely hope that someday I will be able to write an elegy for the living queen of Icelandic crime fiction who broadened my horizons enough to consider Icelandic literature and culture as one of my most prominent influences. Her sublime skills as a writer include the creation of gripping plotlines that balance masterfully between crime and horror fiction, the brilliant characterization that shined both in the Thóra Gudmundsdóttir series and the "Chlidren's House" saga, and the impeccable descriptions of the harsh, unwelcoming Icelandic wilderness that both attracts and terrifies the reader. Nevertheless, her best work, until today, was the standalone novel, I Remember You, a heart-pounding ghost story told by different perspectives which has been adapted into a motion picture, directed by Óskar Þór Axelsson and starring Jóhannes Haukur Jóhannesson as Freyr, a psychiatrist who tragically lost his son and is drawn to an investigation into an apparent suicide when an elderly woman is found hanged in a church. Both the novel and the film have been well-received by the readership and the audiences respectively, thus Yrsa became one of the most prominent representatives of contemporary Icelandic crime fiction and it should be mentioned that she began her writing career as a children's fiction author nearly 25 years ago.

Even though I have to admit that I liked the Thora series more, the "Children's House" installments proved that Yrsa is a versatile author who can write fully fleshed police procedurals, weaving multiple plot strands and linking them together as the story unravels. I think that the first volume, The Legacy, was closer to the author's previous work in the genre as it conveyed this unique feeling of creepiness that made her novels irresistible and impossible to put down. The following three novels in the series, The Reckoning, The Absolution, and Gallows Rock lacked the horror-like element and their style is reminiscent of the classic Nordic police procedural especially in terms of the main storyline and the adopted narrative tropes. In The Doll, Yrsa delivers a novel that blends smoothly crime, police procedural, and horror aspects, an achievement that is bound to satisfy all of her loyal fans around the world. The plot is intriguing and complex while the multiple perspective narrative adds to a quicker tempo that increases the suspense as the reader turns the pages and the story reaches its climax. The first two chapters are captivating and eerie, first introducing us to one of the book's main characters, a disheveled, repulsive doll that is found in the seabed and perhaps possesses demonic powers. At least that's what is suggested in the opening pages and the reader should be prepared to consider the possibility. Besides, it's one of Sigurdardorttir's trademarks to hint at supernatural phenomena which are either confirmed or denied in the final explanation.

The story begins five years earlier with Disa who goes on a fishing trip along with her daughter, Rosa, and a colleague from work, Frikki. That's where they make the gruesome discovery of the doll. Rosa decides to take it with her, even though Disa seems to be more than reluctant to allow the doll access to her own house. The next day, Disa is found dead by her daughter in the bathroom, apparently a victim of a freak accident. Nevertheless, Rosa is not satisfied with that explanation and she seems to be hell-bent on blaming the doll for her mother's tragic fate. As she is struggling to survive inside the foster system, Rosa will be labeled as mentally ill mainly due to her insistence to consider her mother's death a murder. Unfortunately, this is not the only tragedy in the family as Rosa's father had also been killed in an accident many years earlier. Consequently, Rosa develops an obsession that demands justice for her parents' demise and she won't rest until she learns the whole truth against all odds. Her personal inquiries will become a matter of great importance for the police investigation of another murder.

Huldar and Freya are working on separate investigations, but their courses will once again collide when they have to cooperate in an investigation revolving around the possible abuse of a child by one of his guardians. Huldar has his hands full as, at the same time, he is working on a grim case of the possible murder of two unknown victims whose bodies are found in the sea. As both the investigations move forward Rosa's name will crop up and she will become a person of great interest, able to shed light on more than one case. The bodies continue to pile up and soon a vagrant drug addict turns up dead, murdered in the container where he lived. Huldar learns from an eyewitness that Rosa had been seen in the container talking to the dead man along with a friend. The latter is Tristan, the young man who is supposed to be the victim in the abuse case which Hulda and Freya are jointly working on. A frantic search for Rosa's whereabouts will be initiated as her testimony is considered to be of primary importance for the police.

All the above sub-plots will be gradually connected as the story runs its course and in the end, the reader gets a gratifying finale. As I was reading, I was wondering how all those plot threads can be linked together, but I was given the best answer in the final part of the novel. Huldar and Freya share a strained, tense relationship as they were romantically involved in the past and there is a peculiar chemistry between them. Their interactions are often humorous and the reader gets a glimpse into their inner thought processes that lead to their overall behavior. They are not "damned" protagonists in the sense that they have no destructive vices dictating their actions, even though the cases that they have to deal with often cause upsetting emotions that result in a sense of distress. Especially Freya, who is more sensitive than Huldar, is a young woman who likes helping children in need and her work in the Children's House is the most important thing to her. She also has a family to care for as she tends her brother's daughter who is not the easiest kid to deal with. Huldar, on the other hand, is single and as he grows up he realizes that his job is causing him much more stress than he can deal with so he struggles to adopt a balanced lifestyle.

The protagonists in the "Children's House" series are perfectly relatable and the reader quickly identifies with them. Even though it would be of help to be familiar with the previous installments in order to be able to better grasp some of the links between the main characters, The Doll can definitely be read as a standalone and it is the crown jewel of the saga. In my opinion, it is one of Yrsa's best novels to date and it will appeal to all the Nordic crime fiction aficionados. I am not aware of the author's plans for the future of this series, but I think that it would be great if we had a final story featuring Huldar and Freya. I would like to thank Netgalley and the publisher for providing me a free ARC of this title.