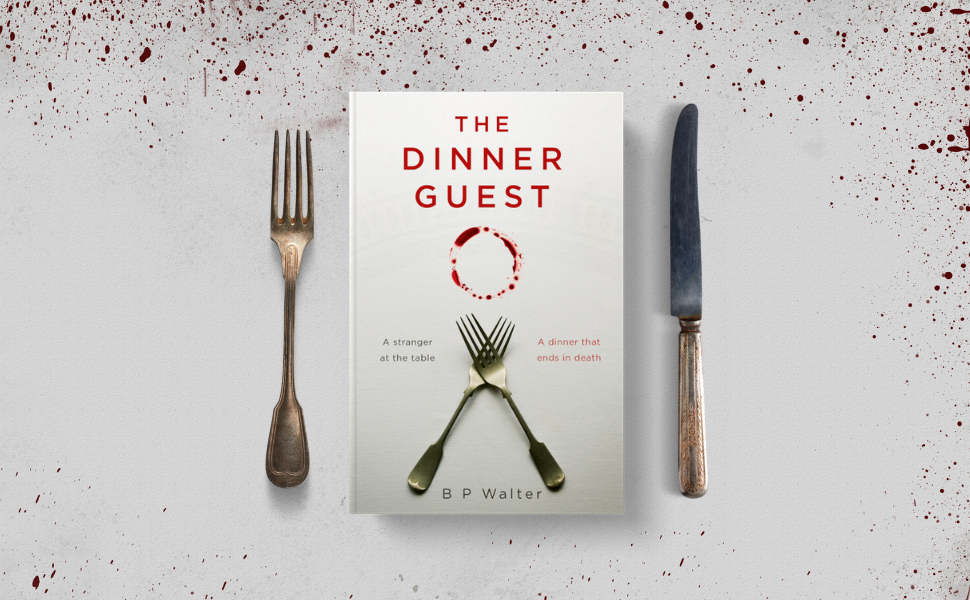 This book is quite a thrilling ride, a nerve-tingling psychological thriller that stands out from the usual, generic novels of the genre due to its magnificent story structure and the exceptional handling of the double timeline narrative by the author, B. P. Walter. The Dinner Guest is Walter's third novel and his best so far, a captivating story tackling many significant themes such as class discrimination, infidelity, betrayal, the stereotypes through which we are used to judge the others, the horrors and disastrous consequences of drug addiction, and many others. All the above angles are smoothly wrapped into a gripping, twisty plot that keeps the reader on their toes, trying to guess the truth about the characters, the possible connections between them, and, of course, who is the real culprit of the crime which is described in the first chapter and kickstarts the book. The novel is divided into two major parts: in the first one the story is set, and the suspense is kept at high levels as we follow the voices of the two narrators who describe from their own point of view the events that led to the perpetration of the murder, while in the second the tempo gets quicker and every obscure plot point is explained thoroughly and in a completely satisfying manner before the story reaches its climax in the last few pages.

In the novel's beginning we read as a young man, Matthew, is getting stabbed in the kitchen of his house and dies after struggling for a while. There are three people present at the house at the time: Charlie, Matthew's husband, Titus, their adopted son, and Rachel, an enigmatic woman whose role remain unknown and her connection to the family is revealed as the plot evolves. Rachel confesses to the police that she killed Matthew, but she denies to reveal the motive for the murder. In the next chapter, the reader is transferred a year back in time, when Charlie bumps into Rachel in a bookstore. Their first meeting seems to be random, even though Charlie, as himself admits in his narration, is instantly suspicious of her behavior and possible motives. Rachel digs her way into Matthew's and Charlie's life slowly and meticulously, first by participating in Matthew's book club meetings which are held in his house, and then by saving Titus from a gang of juvenile delinquents who try to mug him in broad daylight in a dodgy London neighborhood. She seems to be specifically interested in Titus and attempts to approach the teenage boy who likes her and wants to befriend her. Charlie tries to warn Matthew of the possible risks that Rachel's behavior entail, but he can't convince his husband who sees nothing wrong with their new friend and accuses Charlie of being a snob.

The fact that Rachel's intrusion into Matthew's family is chronicled by herself as one of the two main narrators adds up to the overall suspense as she lets the reader know enough to create an overwhelming sense of suspense , while at the same time holding back her true motivation and reasoning behind her actions. A bitterness and eagerness for revenge permeates Rachel's point of view and her character's struggle to adapt to the big city life in central London further emphasizes her working class background and the difficult financial situation she is in. On the other hand, Charlie's point of view is filled with descriptions of his posh lifestyle, his seemingly perfect family life, the idyllic relationship with Matthew and his daily activity as an Instagram influencer. Charlie's background is totally different than Rachel's as he comes from a wealthy family with a lot of high-level business connections and he never had to earn anything during his lifetime. The contrast between the two narrators' personalities makes the story feel more tense, even though both of the characters aren't particularly likeable. The reader cannot root for either of them as their flaws are evident and exposed by the author who doesn't want the reader to identify easily with them

Chronologically, the narration jumps backwards and forwards in time with the event of the murder being the fixed point from which the story extends in the past and the future. The past narration is more dominant as it covers the larger part of the book, though there are some interjected chapters where we witness what happened after Matthew's murder and the effect of the terrible event to Charlie, Titus and Rachel. We know from the beginning that even though Rachel had confessed to the crime, she is not the real culprit, so the reader has to guess who is the most probable perpetrator: Charlie, Titus or another person for whom we know nothing about? And why is Rachel willing to take the fall for such a serious offence? The answers to the above questions will be answered throughout the second part of the novel where past secrets and lies resurface and every piece of the puzzle falls into place as the connections between the characters become clearer and everything begins to make sense. I didn't guess correctly the guilty party and I was fascinated to read the final few pages of The Dinner Guest where a string of effective plot twists make the reader dizzy until the finale.

I think that this is a novel that will be greatly appreciated by fans of crime writers such as Shari Lapena, Mark Edwards, Ruth Ware, or even Harlan Coben and Linwood Barclay. I've never read a book by B. P. Walter and my first experience proved to be more than gratifying. I will certainly keep an eye on his latest work and I will definitely devour his next novel. It is rare to encounter such an exquisite domestic thriller featuring a splendid combination between multiple perspective and double timeline narrative. The characters are well-outlined and the atmosphere that pervades the story is so gripping and suspenseful that renders the book unputdownable. I want to thank Netgalley and the publisher for providing a free ARC of this title in exchange for an honest review.