The King is back! 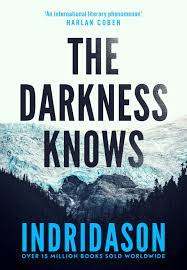 Every crime novel bearing the signature of the godfather of Icelandic noir, Arnaldur Indriðason, is something to long for and his abounding fans around the world are in for a treat with his latest feat, The Darkness Knows. Dazed by his work so far, that includes the notorious Inspector Erlendur series and the Reykjavik Wartime Mysteries, I was so eager to get my hands on this book that I have pre-ordered it several months prior to its publication date. Indriðason is a master in pacing and characterization, while his description of the Icelandic bleakness is so accurate and captivating that the readers feel like they inhabit the same space as the characters. His prose is simple and austere with nothing redundant or superficial about it and it is indisputable that he has influenced the writing style of several noteworthy Icelandic crime authors such as Ragnar Jonasson and Eva Björg Ægisdóttir. Readers who are familiar with his early body of work will trace many similarities between this novel and the Erlendur series as the main plotline is very much alike and the tempo in which it unfolds is heavily reminiscent of that of the novels featuring the grumpy, grouchy detective.

This book is the first in a new saga featuring the retired CID Inspector Konrad as the main protagonist who returns in action six years after his official retirement to investigate a 30-year-old cold case that still torments him as he was never able to find out what happened to a young man who went missing without a trace. Konrad was the lead investigator at the time and his unsuccessful attempts to solve this case have been haunting him ever since. Konrad is a character that shares many common traits with Indriðason's most popular fictitious creation, the solemn, brooding Inspector Erlendur. Both protagonists have a troubled personal history that involves their families, their manner is brusque, and they have a problem to establish meaningful relationships with the others. The author is divulging the information about his protagonist gradually and as we delve deeper into the story, we learn more about Konrad's early childhood, his dysfunctional relationship with his father, a conman and fake clairvoyant who had deceived many vulnerable individuals during the Second World War, and the loss of his dear wife Erna that marked him forever.

The story begins when a group of German tourists who are hiking on the Langjökull glacier stumble upon the body of man who is buried deep under the ice. The forensic specialists quickly identify the well preserved cadaver as belonging to a man called Sigurvin who had disappeared more than thirty years earlier and his fate remained a mystery for the authorities ever since. Konrad is informed instantly about the grisly discovery and he is drawn into the investigation once again when the man who is arrested for Sigurvin's murder asks to talk to him and him only. The man called Hjaltalín had been the prime suspect for Sigurvin's disappearance during the initial investigation, but the lack of a body and tangible evidence led to his release. Now, Hjaltalín is arrested again and he vehemently denies the charges, insisting that he never laid a finger on his former business associate. He asks to speak to Konrad as the retired detective was the only person who had doubts regarding Hjaltalín's guilt in the first place. Nevertheless, their interaction that takes place in Litla-Hraun prison doesn't provide any new clues about the case and Konrad is disappointed to realize that Hjaltalín remains a pathological liar who will say anything to save his own skin.

When Hjaltalín dies due to a terminal disease, Konrad, who as a retiree has a lot of spare time in his hands, will initiate a personal inquiry that involves the re-visiting of key witnesses and his endeavor will be assisted by some of his former colleagues such as Marta, the chief of Reykjavik's CID who has a soft spot for him. Konrad is a headstrong individual who is determined to find the truth about Sigurvin's murder against all odds as it is almost impossible to solve a 30-year-old case. During the course of his investigation, he will uncover many secrets and lies and he will interrogate all those who were close to the victim. In the end, the truth will shine and all the questions will find their respective answers leaving no room for ambiguity. There is a kind of double mystery as apart from the main storyline, the author relays the personal story of Konrad and more specifically the unsolved murder of his father who was stabbed in Reykjavik's infamous Shadow District. While this sub-plot is explored throughout the novel, there is no solution to the mystery and I believe that we will have the chance to learn more about this case in the next installments of the series.

It should also be mentioned that it is not the first time that the character of Konrad appears in an Indriðason's novel as the readers who are familiar with the first volume in the Reykjavik Wartime Mysteries, The Shadow District, will remember him clearly. Konrad was born and raised in the District and in The Darkness Knows, he revisits his old neighborhood and talks with old friends and foes. Indriðason makes several references to Iceland's current and past socio-economical reality and the reader learns a lot about the financial crisis of 2008 and its consequences for the Icelandic people as well as the changes in their everyday lives throughout the last decades. It is always such a pleasure to read such a well-written crime novel by a giant of the genre and it is certain that a new, exciting series begins with The Darkness Knows. There are already three novels published in Icelandic and I hope that we will soon have the chance to read an English translation of the second volume (original title: Stúlkan hjá brúnni). This is a must-read for all the fans of Icelandic crime fiction and for those who enjoy slow-paced murder mysteries featuring well-rounded, three-dimensional characters. We just have to sit and wait for more in the near future.