A Highsmithian tale of greed and corruption.

Bearing heavy Highsmithian undertones and presenting a deep exploration of the sins and dubious morality reigning in the high-end art world, The Burnt Orange Heresy is a tale about greed and corruption featuring a shady protagonist who, in a similar vein to Tom Ripley, is determined to step over any kind of ethical boundaries to gain money and influence. The film is based on the titular novel by Charles Willeford and the director, Giuseppe Capotondi, known for films such as the Italian The Double Hour and Berlin Station, delivers a visually enticing thriller revolving around art forgery and the lengths in which one will go to gain profit and respect among people with power. The cast includes the rock and roll legend Mick Jagger who plays a prominent art collector, Joseph Cassidy, who makes an indecent proposal to the protagonist, James Figueras, an art historian and critic who struggles to make ends meet by giving tedious lectures about his subject of expertise to spiritless groups of tourists who don't seem much interested to what he has to say.

Capotondi takes his time and he devotes the first half of the film to introducing the main characters, James (Claes Bang) and Berenice (Elizabeth Debicki), who meet during one of James's tedious speeches and they quickly form an intimate relationship. James is a man with a lot of secrets and his suppressed ambitions force him to wear a mask in his interactions with other people. Berenice, on the other hand, is a carefree young woman who enjoys casual sex and is drawn by the unknown and the promise of adventure. Thus, when James tells her that he has an invitation to visit Joseph Cassidy a wealthy art accumulator in his secluded villa, Berenice immediately agrees to travel alongside him. As they arrive, their host welcomes them and after some attempts to make small talk, he reveals to James the true reason why he summoned him in his estate. A few meters below his house, a legendary painter, Jerome Debney, lives a quiet life completely detached from the outside world. Cassidy wants James to steal one of his paintings and deliver it to him in exchange for a large amount of money.

Debney is something like a totem for the art critics around the world and James can't wait to meet him, interview him, and take a glimpse of his latest work first-hand before stealing it. Nevertheless, his first meeting with the mercurial elderly artist indicates that he will not be an easy target. He immediately seems to take a liking to Berenice and soon they go for long walks together in which Debney confesses some of his darkest secrets to his new friend. James is eagerly waiting for his chance to complete the mission assigned to him by Cassidy and he finds the perfect opportunity when Debney invites him along with Berenice in his little cabin for drinks and chat. However, a big surprise awaits James and the information he receives changes his whole perspective on the matter. Having the ability to adapt in new circumstances, he instantly hatches a plan that will provide him all the things that he craves.

It may seem that I revealed a great deal about the movie's plot, but there is a lot more to the story that accelerates its pace in the second half of the film in which James's true nature as a character is exposed. A man who will stop at nothing to take what he thinks that life owes him, an amoralist who, nevertheless, cannot admit his excessive greed to himself and attempts to justify his devious actions using a variety of excuses. Berenice acts like a reminder of the value of honesty and integrity and that makes James mad with rage. Their relationship ends in the most abrupt of manners and in the course of the film the audience has to reconsider its assessments regarding the main characters while the story becomes all the more perplexed and brutal. The Burnt Orange Heresy is a true roller-coaster of intensive feelings that dominate the viewer and make him participate in his own right to the developments on screen. The ending is highly symbolic and bittersweet concluding the story in the best possible way.

I specifically liked the symbolism of the flies, an insect that in the Medieval art was used in paintings in order to state that the person represented on the canvas was a mean individual. Catopondi uses this knowledge in order to impose his own interpretation of the protagonist's inner cosmos in the final scene and in the final denouement, the audience is left with no doubt concerning the morale of the story. Moreover, the exceptional performances by the cast add another plus to the movie, especially Elizabeth Debicki's portrayal of Berenice is convincing as well as understated and her presence steals the thunder. Donald Sutherland, a veteran American actor who has been involved in hundreds of films, is Jerome Debney and his overt experience is ever-present in his acting even if his overall screen time is rather limited. Jagger's distinct, stylish performance is indicative of his extravagant, larger than life, persona and his contribution is invaluable as it adds a quirky dimension to the film.

Films about art forgery are more than often enjoyable, though only a few of them manage to stand out and leave their mark on screen. Prime examples are Tim's Vermeer and The Moderns while, for those who are interested on this particular subject, there is also the documentary F for Fake directed by the grand master Orson Welles. The Burnt Orange Heresy is one of those titles that will be remembered as one of those films that made a difference and it will be numbered among the best productions of this specific genre. Fans of Patricia Highsmith's body of work will certainly appreciate the cynicism exuded by the movie and the grim view on human nature. I would also recommend it to those who enjoy a well-acted, slow-burning thriller emphasizing on its characters and their plights. 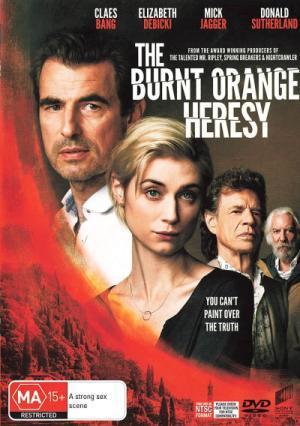