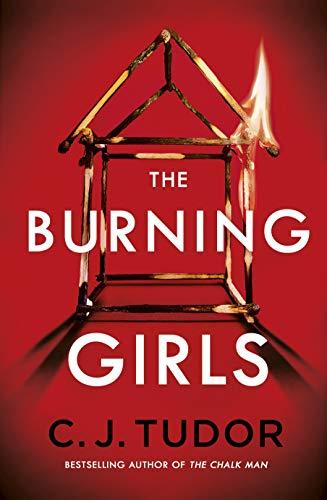 C. J. Tudor is an Englsh author from Nottingham whose debut thriller The Chalk Man was hailed by book critics as an exemplary psychological thriller novel and put her on the map of the genre's most promising new writers. I've only read one book written by her, The Taking of Annie Thorn, and I instantly became infatuated with the brilliant plotline and choice of narrative style that is reminiscent of the genre's most well-known representatives such as the master of horror fiction, Stephen King. The Burning Girls is her latest work that will be published on January 21st 2021 and I was lucky enough to have my request for an ARC approved in Netgalley. The setting of the book is the small village of Chapel Croft in East Sussex, out in the English countryside and the protagonist is Jacqueline- "Jack"- Brooks, a female Reverend who is ostracised there, after a terrible event that took place in her previous parish in the city of Nottingham. Chapel Croft is a hamlet that carries a dark history of martyrdom that is connected to the Marion persecutions of Queen Mary in 1556. Two young girls have burnt alive along with six more villagers and today their ancestors commemorate their sacrifice by setting alight two small twig dolls on the anniversary of their execution. This horrific backdrop still haunts the small community who suffered another tragedy when thirty years ago, in 1990, two teenage girls, Merry and Joy, have disappeared from the face of the earth without anyone knowing the reasons behind their vanishing.

Jack is sent as an interim vicar to Chapel Croft after a horrid case of an exorcism gone bad in Nottingham that resulted in the death of a young girl, Ruby. Even so, she is annoyed to hear about her exile in some god-forsaken place in the countryside, especially if one considers that she has to move along with her teenage daughter, Florence -"Flo"- who resents her mother for forcing her to abandon her home and friends in Nottingham. Jack is a woman that is filled with secrets from her past life regarding her family that neglected her since she was little and led her to a rough livelihood. Furthermore, her husband and father of her daughter has committed suicide several years ago, adding another black spot in Jack's personal history.

The protagonist becomes quickly acquainted with the village's murky history and she is soon engrossed with the case of Merry and Joe that was at the time hastily dismissed by the authorities as another teenage runaway case. As Jack digs deeper and starts asking probing questions that rattle the cage of some of the community's most spotlighted residents, she will find herself in a position of danger that extends to her daughter who is haunted by visions of the burning girls. Flo who has to deal with a number of issues and challenges created by moving to a place where she knows nobody will begin doubting her own sanity and will have to collaborate with her mother in order to make sense of her disturbing, supernatural, experiences.

The story unravels mainly through Jack's eyes, who is also the sole first-person narrator in the novel but the author also uses the third-person narrative in the case of Flo and an unknown man who comes from the past set to take revenge on Jack. This mixed narrative style adds to a quick pacing while the suspenseful, ominous descriptions in several parts incorporate successfully the horror element in the story. The characters, both primary and secondary, are well-written and plausible while the reader can easily identify with Jack, regardless of her obvious flaws and weaknesses. The Burning Girls balances masterfully between the thriller, mystery,and horror dimension and confirms C. .J Tudor's writing skills and talent. It is a perfect choice for a cloudy winter's day during the Covid-19 quarantine that dominates the Western world today.