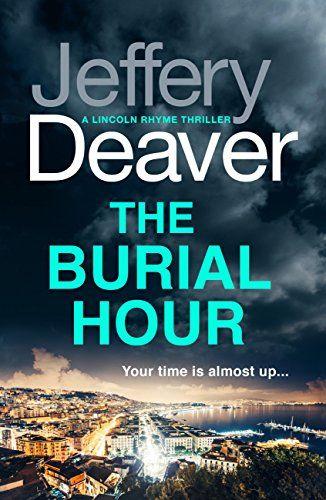 I am not an avid fan of Jeffery's Deaver's Lincoln Rhyme series, I've only read the Coffin Dancer -the second book in the series- which I found rather entertaining and has one of the most successful and mind-blowing twists I've ever read in the books of the genre. The Burial Hour is the thirteenth Lincoln Rhyme/Amelia Sachs book and the setting in this one is not the crowded and congested New York city but a -relatively- small European city, Naples. The urban landscape of today's Naples, a city that is known for the vicious gang of Camorra who is responsible for a vast number of atrocities, transfuses a fresh perspective to the text and the reader welcomes this change of scenery. Furthermore, the reader has the opportunity to learn a lot of things about the police process taking place in contemporary Italy as well as the Naple's biggest problems such as the refugee crisis and the organized crime growth.

Lincoln Rhyme, the quadriplegic crime scene expert travels to Italy along with his trusted sidekick Amelia Sachs following the trace left by an insane serial killer and kidnapper, nicknamed as the "Composer" because of his obsession with music, sound, and rhythm. The pace of the novel is rather quick and the twists and turns of the story (the author's trademark) keep you on the edge of your seat, turning the pages to see what happens next. The main problem with this book is that the antagonist (or the villain) is not convincing and terrifying enough to provoke the analogous feelings from the reader. Apart from that, this is a book that will certainly appeal to J. Deaver's loyal audience as well as to crime fiction fans in general who will find it a rather satisfying read.