The Book of Cold Cases

A ghost story with a backbone. 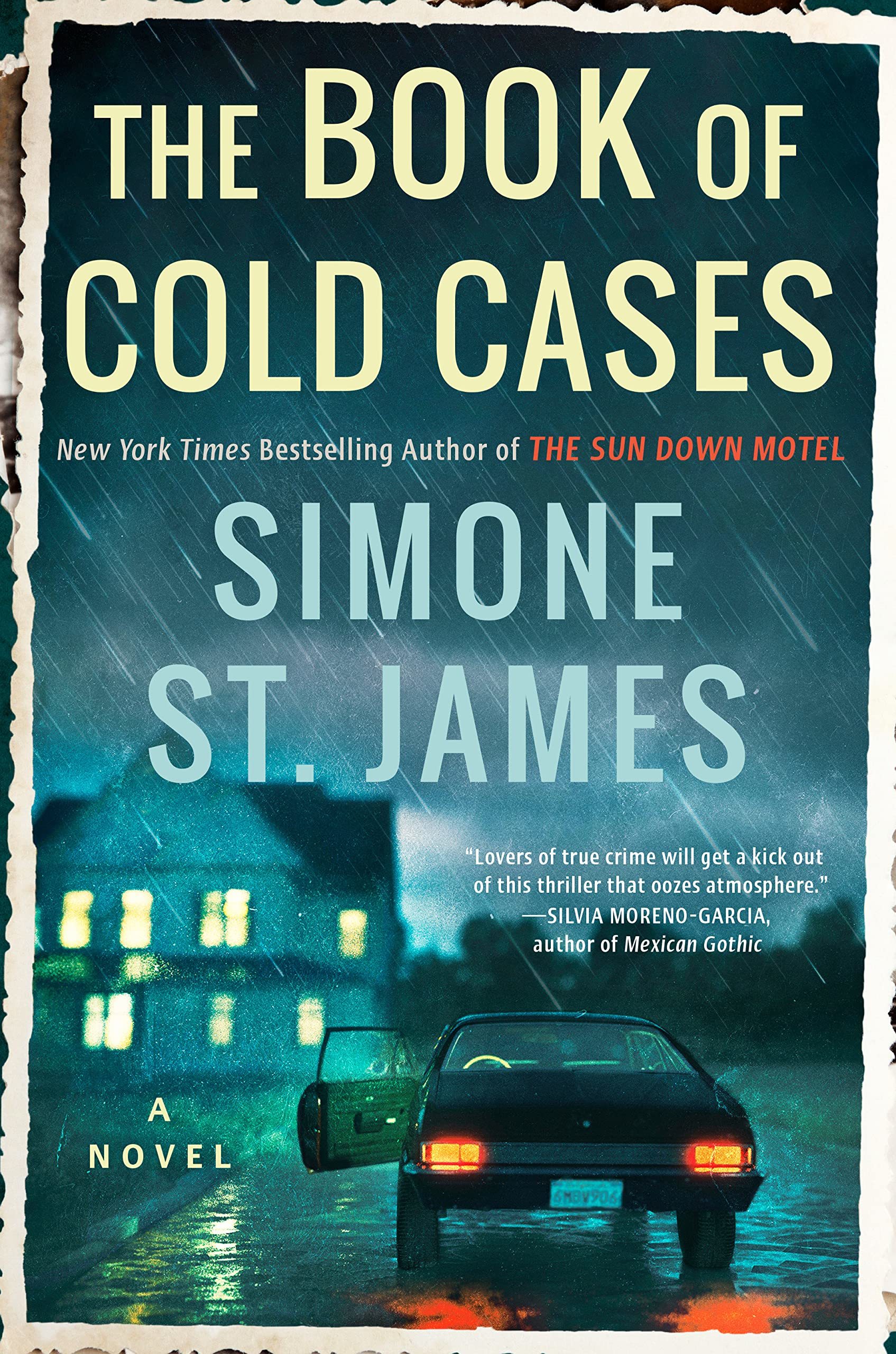 "She didn't know what a life without fear would look like. Beth knew the contours of fear intimately, its shifting shapes, its taste and its smell".

Simone St. James is one of the most celebrated contemporary American thriller writers and novels such as The Broken Girls and The Sun Down Motel have been exalted by the press and relevant book blogs around the web as some of the most intriguing mixtures of thriller and horror fiction, turning the spotlight on the exemplary characterization and gloomy settings that ground the reader and propel them to immerse into a story brimming with supernatural interventions and metaphysical interference from creatures that tend to inhabit our most horrid nightmares. As a loyal non-sympathizer of ghost stories and generally narratives that contain the supernatural aspect in any form, I was at first wary of St. James's work, but after reading The Broken Girls, I knew that I've found the true successor of Stephen King's legacy, an author who writes within the confines of the horror fiction genre, nevertheless without blemishing the story with ghosts constantly hiding in the dark corners of the secluded mansion type of tropes. The superhuman aspect, as expressed in the existence of ghosts in the case of The Book of the Cold Cases, is handled expertly by the author who uses it sparsely, thus more effectively, and justifies their presence within the story by divulging a supporting narrative that makes them all the more exciting and chilling at the same time. Perfect for fans of Stephen King, Alex North, and C.J. Tudor, Simone St. James's latest release has all the elements that make her work stand out and sets the bar higher than ever for her future novels.

The story of the novel is narrated through different timelines and alternating perspectives, with a young woman, Shea, being the sole first-person narrator and the main protagonist. Shea maintains a website, the titular "Book of Cold Cases", where she re-examines unsolved cases of the past that remain open while engaging in pertinent conversations with her followers and researching the relevant police investigations from every possible aspect. She lives in Claire Lake, Oregon, a little town which was shocked to the core several decades earlier with the infamous "Lady Killer" case, a series of two consecutive murders by shooting of two individuals above any kind of suspicion in the side of the road by a female culprit who also left notes in the crime scene to taunt the authorities and send her own messages to an unknown recipient. The prime suspect at the time, Beth Greer, had been arrested and tried for the murders but was finally acquitted by the court of law, without however at any time convincing the citizens of Claire Lake of her innocence. Beth remains a person that cold case nerds find fascinating and her restricted way of life, living almost isolated in the Greer mansion, a monstrous building on the top of a hill in one of the town's most affluent suburbs, further fed the local gossip and provided her with a status of notoriety within the small community. Today, Beth is a mercurial old woman who decides to tell Shea her version of the events that rocked the boat in Claire Lake several decades earlier, for reasons that she seems keen to keep to herself. The charged interactions between Shea and Beth, the two of them dancing around each other in a unique kind of a cat-and-mouse game that is exactly the reason for which the story moves forward, it constitutes the main narrative engine of the plot.

It all begins when Beth Greer makes a visit to the doctor's office in which Shea works as a secretary. The recently divorced, 20-year-old cold case fanatic instantly recognizes her as she has already made personal research on the "Lady Killer" case in the past and is tempted to ask her for an interview, even though she finds the possibility highly unlikely given Beth's consistent denial of talking to the press during the previous decades. Thus, she is more than amazed when Beth seems to take an interest in her as a person and her work in her website accepting to talk to her under the condition that the discussions will be held in Beth's residence, the imposing Greer Mansion. In Shea's first visit, strange things start to happen around the house such as the water taps being turned on by themselves, the sink becoming filled with a blood-like substance in the blink of an eye, and strange whispers uttered by some invisible entity shake the protagonist's resolve to complete her conversations with Beth. Shea has the help of Michael, an ex-cop now working as a private eye, who becomes her guardian angel and confessor as the plot develops. Shea carries a traumatic past that still dictates a large part of her everyday behavior as when she was only nine years old, she became abducted by a stranger in his car and managed to escape at the last minute. This experience causes her major paranoia even today and she follows a strict security routine, that even though might be perceived as an exaggeration by an outsider, however, it makes her feel safe. Shea's insecurity will be tested to the limits during the course of the novel as in the finale she will have to face a malevolent ghost from the past who still inhabits the Greer Mansion and torments Beth for the last forty years.

The tempo is measured and rather slow in the beginning with the author slowly dripping to the reader vital pieces of information regarding the 1977 murders and the subsequent police investigation with all its flaws and omissions. The "Lady Killer" case is still considered to be the biggest mystery in the history of Claire Lake, and there are several crucial pieces of evidence that indicate Beth's innocence as Shea already knows. However, if that was the case, how can Beth's overall attitude during her arrest and interrogations can be explained? Studying the transcripts of the interrogations conducted by the detectives in charge of the case, Beth seemed rather hostile and ironic toward the two officers, a fact that puzzles Shea in the present as this is definitely not the type of behavior exhibited by an innocent person. As her meetings with Beth reveal, there is another person who played a crucial role in the case, and that is none other than Lily, Beth's stepsister, an evil force of a woman who used to terrorize Beth and her mother during their childhood and has been dead for a long time. Nevertheless, it is evident that Lily is still around in the form of a vile apparition that bullies Beth in her own home for several years seeking revenge for things that happened in the past. With Michael's invaluable aid, Shea will get to face herself whatever is lurking around Greer Mansion in a final showdown that will satisfy even the most demanding of readers.

The Book of Cold Cases is not a pure horror novel, though there are lots of hair-rising sequences present the text, with St. James's colorful descriptions winning over the reader as they put him in a position deep inside the story's own time and place. As we read, we are becoming silent observers of the bizarre occurrences taking place in the haunted Greer villa, while the in-depth characterization renders Shea's character an easy-to-empathize- with, three-dimensional human being. Beth Greer is the human riddle of the story with the reader rooting for her sometimes while others condemning her as a heartless individual who, even if she is innocent for the "Lady Killer" murders, she is nevertheless a person destined to be despised due to her repulsive egotism and cold calculation that seems to guide most of her actions. The pacing of the story's unraveling is gradually expedited and the last part of the novel flows in a frenetic tempo, leaving the reader breathless and in awe. The multiple perspectives and timelines are expertly directed by the author whose experience is graphically displayed on page in one of her most mature thrillers ever. I think that The Book of Cold Cases belongs to the top-5 of the best horror/thrillers of 2022 and I believe that it would make a solid nomination for a literary award of the most outstanding novels of the year. Highly recommended to everyone!

The Book of Cold Cases