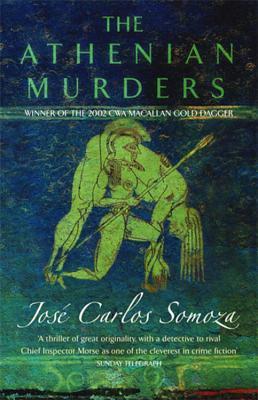 "We live in a strange world Heracles. A world where nothing can be entirely rationalized or understood. A world that doesn't always behave according to the laws of logic, but to those of literature". (pp. 199-200)

Wow! That was really something else! I am an ardent fan of Jose Carlos Somoza's work and I loved some of his novels such as Zig Zag and The Art of Murder. In the Athenian Murders, the author delves into an uncharted territory where literary mystery meets Ancient Greek philosophy and the result is remarkable. The setting is Ancient Athens right after the end of the Peloponnesian War between Athenians and Spartans. The protagonist is Heracles Pontor, a middle-aged, fat and brilliant individual whose nickname is "The Decipherer of Enigmas" as he knows how to use his deductive and reasoning skills to uncover hidden meaning in every instance. When a young ephebe, Tramachus, is found dead in Lycabbetus hill, his body maimed by wolves, his tutor in the Plato's Academy, Diagoras, asks Heracles to help him to find the truth behind his student's early demise.

In parallel, Somoza inserts another timeline in the present day, where the Translator of the book is keeping footnotes struggling to uncover the mysteries of the text itself. He is convinced that The Athenian Murders is an eidetic text. Eidesis is "a literary technique invented by the Ancient Greeks to transmit secret messages or keys in their works. It consists of repeating, in any text, metaphors or words that, when identified by a perceptive reader, make up an idea or image that's independent of the original text" (p.14). This dual timeline works great as the unraveling of the past storyline collides with the present one and the bounds between reality and fiction become blurred as the Translator is getting more agitated with each page he translates, discovering -in horror- that perhaps himself is nothing more than a literary character in the book.

Though it may sound a bit complicated, the story doesn't get confusing in any part and the reading experience is just sublime. There are also several thought-provoking insights on central philosophical issues such as the nature of reality and the existence -or not- of the Platonic metaphysical Ideas. Furthermore, Somoza is also emphasizing the Ancient Athenian rituals, more specifically the Dionysian that was full of mysticism and spiritualism. I won't say anything more as it would be truly a shame to spoil this magnificent story. I only add that there is a blend of genres like crime fiction, literary fiction, philosophy, whodunit, and others.

I can only wish that more authors will engage in this kind of writing in the future. In my opinion, The Athenian Murders is Somoza's best book until now, even better than Zig Zag, a novel that I adored. Keep your eyes open for the upcoming books by the Spanish literary crime master and if you're not familiar at all with his work, this book is the best place to start. 5/5 stars!