A distressing story about two siblings from Belgium.

This is another unblemished Belgian crime film production, wonderfully shot and with excellent performances from the -small in number- stellar cast. Kevin Jansenns (Vermist, Revenge)plays the role of Kenny a young drug-addicted thug and robber who gets out of prison after four years of incarceration. Jeroen Perceval (Bullhead, Borgman) is Danny, Kenny's elder brother who gets infatuated with his baby brother's girlfriend, the young waitress and heroin addict Sylvie (portrayed impeccably by Veerle Baetens). Danny is reluctant to talk to Kenny about his relationship as he seems to live on a world of his own where things remained still over time. Kenny believes he still can win Sylvie's heart even though she is not interested anymore. The story will take a more suspenseful turn in its second half where the two brother's relationship will be tested under hard circumstances. This movie also casts Jan Bijvoet whose great performance we admired in the disturbing Borgman (2013).

I will not reveal anything more about the plot as it would spoil a strong cinematic experience that proves that Belgian productions remain at the top of today's Continental crime film productions. This is a sorrowful story with a tragic ending where a shocking final plot twist overturns everything that we, as the audience, thought and believed about the characters. "The Ardennes" is a slow-burning masterpiece, it is the first full-length film directed by Robin Pront (The Flemish Bandits, Injury Time) and a movie that you will never forget as it succeeds in getting across to the viewer its gloomy mood and character. The two brothers' story arc is moving as well as tragic and we root for them until the ending, never mind their evident flaws.

This is a movie that I can recommend without a hint of reservation to all Euro-Crime fanatics out there, and especially those who are keen on Dutch and Belgian productions. Enjoy! 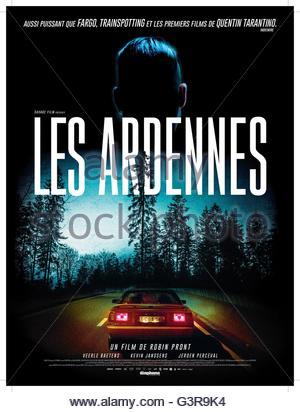