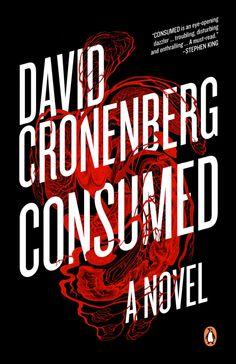 This book is an intense, bizarre experience that amazes and enthralls the reader from the beginning till the end. Get ready to dive into the depraved and grotesque world, created by the notorious film director, David Cronenberg who makes his debut in literature and he certainly doesn't disappoint his loyal cinema audience. The main theme of the novel is Cronenberg's obsession with the relationship between humans and technology, the possibility of mechanical prosthetics to radically transform the human character and behavior, and the nexus of sexuality and machines. Cronenberg explored the above subjects in various films which he directed and, for the most part, written such as Crash (1996), Videodrome (1983) and eXistenZ (1999). '

Consumed narrates the story of Naomi and Nathan, two journalists and lovers who try to uncover the truth behind an extremely disturbing crime, the murder, and dismemberment of the wife of a world-famous Greek-French philosopher, Aristide Arosteguy in Paris. This the basic premise of the plot which becomes weirder and weirder as the reader is confronted by brutal, nevertheless very well-written, brutal descriptions of cannibalistic actions, innermost sexual fantasies and dark thoughts by the -unlikeable- characters. I read in many reviews a harsh critique on the sterilized and dissociative way of Cronenberg's writing manner but I think that the style of Consumed is the most appropriate as the story and the messages that the writer wishes to impart demand a distanced approach.

There is also a bit of information on the subject of philosophy scattered in the text with references to great Western thinkers. To sum up, Consumed is not a book for the uninitiated readers who are not familiar with David Cronenberg's work. On the other hand, the devoted fans of his films will enjoy it.