Tales of the Night

An exquisite collection of short stories by Peter Høeg. 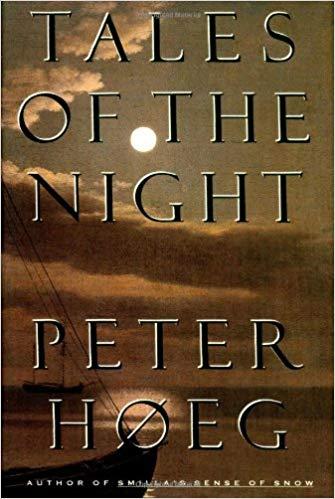 Peter Høeg is one of the most talented and versatile contemporary Danish authors and he is widely known for his best-seller novel, Smilla's Sense of Snow (published in English in 2003), a hallmark for the ensuing Scandinavian crime fiction boom. The book was also adapted for the big screen by Bille August, starring Julia Ormond and Gabriel Byrne (1997). Tales of the Night is a different collection of short stories that defies any strict genre categorization and it is one of Høeg's early writings -it was written in 1990- which showed the reading audience his remarkable skills in crafting arresting stories of high literary value. There are eight stories in total, and in this review, I will try to present a brief synopsis for my top picks. The connecting link between all of them is, as the author puts it in his foreword note, that they "have to do with love and its conditions on the night of March 19, 1929".

The first story in order is titled "Journey into a Dark Heart" and narrates the meeting of a young mathematician with the fictional alter-ego of the renowned Polish-born English novelist, Joseph Konrad, writer of the monumental Heart of Darkness, the book that inspired Francis Ford Copolla to shoot his masterwork, Apocalypse Now. The meeting takes place in a newly-constructed train which rails for the first time in Africa. Also present in this discourse is a notorious German war-hero who is responsible for several atrocities during the colonial wars in the Black Continent. Conrad is portrayed as a mercurial, though forthright and sincere, intellectual who is going to test the limits of his company raising several hot issues that provoke the German officer's anger and distaste while they puzzle the young man who seems to embody the scientific positivism of the era. The dialogue in this story is superb and made me look deeper into the dark European history of colonialism. There is also a nice twist, in the end, giving a further kick to the reader.

"The Verdict on the Right Honorable Ignatio Landstad Rasker, Lord Chief Justice", the third story in order, is a graphic account of the relationship between a young man and his father, an austere judge who represented integrity and principle in his son's life. In his twilight years, the always law-abiding judge commits an act that will test his son's trust and admiration. Again, Høeg inserts a twist near the end that is both unforeseen and puts the whole narration under a different light. His writing style shines once again in this story and offers a detailed history of the father-son liaison with rich descriptive parts and excellent dialogue.

Last, but not least, there is "An Experiment in the Constancy of Love", a story where a young female physicist, Charlotte Gabel, attempts to prove scientifically that there can not be an eternal love outside a closed system that prohibits the flow of energy from one human to another. It is a deep pondering on the nature of love, its decay and temporal nature while at the same time it is a great character study of a particular individual such as Charlotte who denied the pleasure of love in the "real" world in order to devote herself fully in the study of physics and her innovative experiments. Soon, Charlotte will present the three laws of love and meet Niels Bohr, the famous Danish physicist who is well-known for his work on quantum mechanics and atomic structure. There is a lot of scientifical terminology in this story, but nothing so difficult that would prevent the reader from understanding this wonderful text. Høeg's prose is tight and his language is full of clues and riddles to be deciphered by the agile reader.

Tales of the Night is a first-class literary fiction gem that proves the author's great talent and also feeds you a massive amount of information about socio-political and scientific developments in the interwar years. Always keep in mind Høeg's brief foreword note and be patient even if the first pages of some stories seem to drag on. You will be rewarded plenty in the end.

Tales of the Night