"If your problems didn't scare you, wait until you see our solutions".

It is a nice surprise to watch a documentary recording the eternal battle between the strictly bio-medical approach to mental health and the one that is more focused on the social, educational and spiritual factors framing this controversial issue. Blair Foster, an acclaimed documentarist known for his previous works The Clinton Affair and Rolling Stone: Stories from the Edge, treats the subject matter with meticulousness and sensitivity offering voice to the numerous individuals who got hooked on the "miracle drug" Xanax, which substituted the notorious Valium that created an army of addicts in America during the previous decades, as well as to several scientists that provide their expertise on the heated topic. Initially promoted by the medical professionals as the "magic bullet" that could help people achieve instant relief from stress and its burdensome effects, a problem faced by an ever-growing portion of the population worldwide, Xanax is today an overly prescribed drug that instead of solving the problems of anxiety, multiplies them as human body tends to rapidly build tolerance, leading to addiction and severe withdrawal symptoms emerging when the user decides to cease using it.

Medical science tends to see the problem of anxiety as a mere malfunctioning of the amygdala, the part of the brain that forms the core of a neural system for processing fearful and threatening stimuli, thus generating the well-known "fight or flight response" to stressful situations. Historically, there have been numerous names to describe anxiety-related disorders such as melancholia, neuroses, the vapors, the English malady and many others, proving that the problem is intertemporal and strongly interwoven with human nature. The discrepancy on the scientific perceptions of stress and anxiety comprises an argument on its own for those who embrace a more socially-oriented attitude toward the subject, claiming that the discrepancies in medical theory and practice throughout time have their roots on the unstable nature of the concepts of mental illness and that the solution does not rely on any psychotropic substance promising instantaneous comfort but on the path that leads human beings to building resilience to hurtful modes of thought and the consequential negative emotions tormenting the individual. Take Your Pills: Xanax is bold enough to take sides and support the latter theory, without however lacking clarity in its presented arguments which are well-founded and easy-to-grasp even for the audience who is not familiar with the background of the benzodiazepine addiction in the U.S.

Some may think that the director chooses the path of the least resistance, interviewing those who have suffered the side effects of using Xanax, struggling to prove his point and losing his impartiality in the process. However, this is not the case with this dense documentary that furnishes the audience with a hefty amount of information, examining the subject from as many angles as possible, though avoiding the pitfall of delivering a purely academic feature that would be completely inaccessible to the layman. We are watching as everyday men give their personal account of Xanax use, from the elating first experience until the bitter end that is bound to come. They provide diverse reasons leading to their Xanax addiction, from school bullying and the outbreak of the Covid-19 pandemic to the events of the 9/11 and the emergence of the social media era that blurred the boundaries between private and public life. Statistics show that more and more Americans choose to become "comfortably numb" through the use of the quarrelsome sedative that throughout the years became the number one prescription drug for stress around the globe. Moreover, the creators of the documentary emphasize on the significance of issues that may seem minor to the unsuspecting audience such as the extensive advertising campaigns conducted by the pharmaceutical industry promoting their product nationwide, the differences regarding the attitude toward psychotherapy according to race and gender, the history of labelling -and the corollary stigmatization- in the medical language and several more that I would need much more space to mention.

You should have in mind, if you are truly interested on the effects of benzodiazepines to the human mind and body, there is the detailed monograph by C. Heather Ashton under the title Benzodiazepines: How They Work & How to Withdraw, also known as the "Ashton Manual", that provides key pieces of information regarding how to cope with the nightmarish withdrawal symptoms of the drugs belonging to that category. Overall, I would say that I liked Take Your Pills: Xanax, perhaps because it reminded me of my university days as a bachelor of Sociology, and I think that it stands on a far more decent level compared to other haphazard documentary productions of the recent years. Concluding, I have to add that this documentary can be watched as an extension of Alison Klayman's 2018 Take Your Pills that closely examined the Adderall -a prescription stimulant in the same class as Ritalin - epidemic in today's America. Both Klayman and Foster's works tread on the facts while also featuring the personal testimonies of people who got stuck in the nasty predicament of substance addiction and abuse. 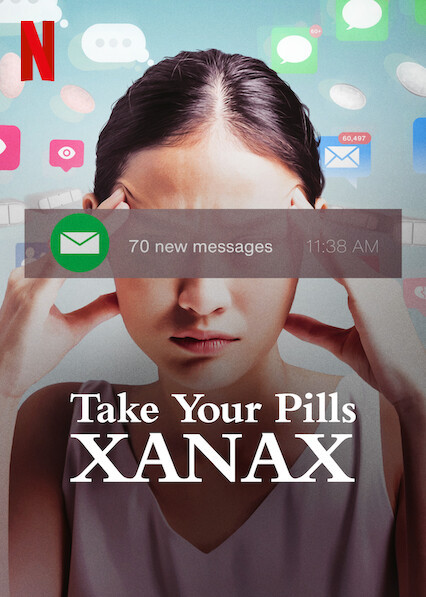