A rich, complex serial-killer thriller by the outstanding Ahndoril duo. 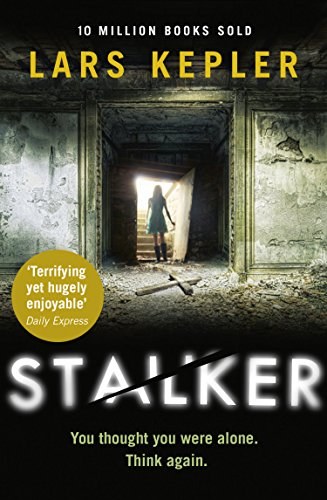 This is the fifth installment in the magnificent Joona Linna book series, written by one of the most successful crime fiction authors duette, Alexander and Alexandra Ahndoril, whose nom de plume is Lars Kepler. The previous novel, Sandman, has been a major commercial as well as critical success and it featured one of the most terrifying antagonists in Scandinavian crime fiction, Joona Linna's arch-nemesis, Jurek Walter. The finale of Sandman ended in a cliffhanger regarding the fate of both Joona and Walter, the first officially considered to be dead by suicide while the second got shot by Joona's colleague and friend, Saga Bauer, nevertheless the book doesn't make clear if Walter is really dead or he managed, once again, to get away with heavy injuries. Thus, Stalker begins with a new character, detective Margot Silverman, leading the investigation of a series of grisly homicides taking place in Stockholm where the perpetrator films his victims just before he attacks them and then uploads the videos to the web, so the police can watch it without being able to intervene in any way.

Joona Linna is absent in the first part of the book and is called to action by Saga who finally obtains hard evidence that proves that Jurek Walter is dead. She wants to tell Joona herself, so she embarks on a long journey to Nattavaara, a small village about 1.000 kilometers away from Stockholm. There, Joona is living along with his daughter, Lumi, after the death of his beloved wife, Summa, who suffered from cancer and passed away some months before. Joona will take the bait from Saga and he will return to Stockholm to see with his own eyes and evaluate Saga's evidence. But, his detective instincts awaken and he is quickly drawn to the serial-killer case which features another peculiarity for him. Erik Maria Bark, the character we met in the first installment of the series, titled The Hypnotist, and held a protagonistic role in the book's plot. Erik is still facing some of the troubles that also plagued him in The Hypnotist, like his addiction to sleeping pills and an unstable personal and family life. Erik plays a major role in Stalker too as, in a way, he himself is the key that finally solves the case . I won't say anything more as it would spoil the reading experience but get ready for a thrilling ride of 600 pages full of suspense, red herrings, great horror sequences, etc.

Lars Kepler's thrillers almost always flirt with the horror genre and there are many electrifying scenes in Stalker that will send you to your house's windows to check if anyone is lurking outside waiting to commit the worst atrocities. The tense atmosphere, a trademark characteristic of the author(s), is further strengthened by the short-length chapters, only a page, or a page and a half long. The book blends various crime fiction sub-genres such as police procedural, whodunit mystery, crime/thriller and as I mentioned above horror fiction. The result is an excellent crime novel that guarantees that you will never get bored, never mind the vast number of pages. Lars Kepler is close to Jo Nesbø's and Jussi Adler-Olsen's writing style and handling of the plot, while he always succeeds in surprising the reader who can never guess right the identity of the villain until the author reveals him in the final pages. If I had to choose the best novel until now in the series, Stalker would be my first choice as it features all of Lars Kepler's trademarks, has a very strong plot with plenty of red herrings and diversions, the atmosphere is murky and strained in a way that keeps the reader on the edge of his seat, and it's also a clever murder mystery. I recommend it to all Nordic noir devotees and keep in mind that The Hypnotist (#1) has been adapted to the cinema screen, under the same title, in 2012 by Lasse Hallström, starring Tobias Zilliacus as Joona Linna and Mikael Persbrandt as Erik Maria Bark.