The machinery of deviltry roaring in full force.

"To speak evil of no one, to avoid quarrelling, to be gentle, and to show perfect courtesy toward all people". (Titus 3:2)

The above Biblical verse lies at the heart of this film's story which can be watched as an extreme social satire about the perils of blind conformity to social norms and conventions, especially those pertaining to the hosting etiquette that dictates the proper behavior toward guests and functions as a guide of proper form of conduct in relevant situations. However, it is almost inconceivable to label Speak No Evil as a satire or black comedy due to the level of cruelty and unvarnished brutality involved in the plot that is only comparable to Michael Haneke's early works, particularly Funny Games, though there are several intrinsic characteristics in each film setting them definitively apart. While in Haneke's 1997 Austrian psychological thriller the audience was forced to witness the torture of a family in great detail while being held captive in the hands of two home intruders and high-functioning psychopaths, Christian Tafdrup's narrative unfolds through an escalating series of camouflaged passive-aggressive actions carried out by a Dutch couple while hosting a Danish family that they met in a vacation trip in Tuscany a few months earlier. The flagrant violation of codes of civility culminates in a crescendo of unprecedented mayhem to the point that impels the audience to let a sigh of relief when they see the ending credits rolling. The violence in this movie is primarily concealed and implied rather than explicitly manifested through ultra-violent sequences meant to shake the audience with their graphic quality. There is no need for such scenes to exist in order to create a memorable horror picture and the director and co-screenwriter, Christian Tafdrup, whom we first met as an actor in some major Danish cinematic and television productions such as After the Wedding and Borgen, seems to have grasped this truth in its entirety.

Despite the fact that the first 30 minutes of the movie flow at a slow pace, capturing the Danish couple's, Bjørn and Louise's, quotidian ennui that involves activities relating to housekeeping, attending their daughter's flute concert, and hosting a dinner for a couple of friends, the feeling of impending doom is effectively conveyed to the viewer through the use of the heavily dramatic, orchestral musical score composed by Sune Kølster that heralds the predetermined destiny that patiently awaits the whole family. Every single aspect of what constitutes the atmosphere, or mood, or tone of Speak No Evil screams with all its might from the outset that there is no chance for a happy ending. In that sense, the experience of watching this Dutch/Danish co-production feels like a masochistic deed as you instantly empathize with the Danish characters and root for them, only for them to make the gravest of judgement errors and mistakes that eventually seal their fate. We cheer when Louise convinces her husband to leave immediately and return to Denmark halfway through the movie and we are annoyed by their indecision and sentimentality that drive them back to the house of Patrick and Karin. The Dutch couple has to be the most appalling villain dyad that ever breathed in a European horror movie for the last decade. It is apparent from the start that there is something off about them, but nothing and no one can sufficiently prepare the viewer for the truth which is revealed in the final part where the masks have finally fallen, and the true intentions of Patrick and Karin are made clear.

The story commences in Tuscany, Italy, in the summer with Bjørn (Morten Burian) and Louise (Sidsel Siem Koch) along with their little daughter, Agnes (Liva Forsberg) being there during a family vacation trip. There, they will casually meet Patrick (Fedja van Huêt) and Karin (Karina Smulders), a Dutch couple who also have a little kid, a boy called Abel who suffers from congenital aglossia, a defect resulting in the partial development or complete absence of a tongue. Patrick wins Bjørn over with his machismo and display of bravura, traits that the latter longs for, adding some flattering words that send the Danish man straight to heaven. Louise is by nature more reserved, nevertheless her faith in the significance of politeness and exhibiting what is defined as "good behavior" obliges her to go along and spend some time with the two strangers. Time passes by and the characters return to their homes when one day Bjørn receives a postcard on behalf of Patrick and Karin, inviting them to Netherlands for a weekend together. Despite Louise's initial reluctancy, the couple resolves to make the long drive to Holland, also bringing Agnes along to offer her a chance to meet Abel better. But as they arrive to their hosts countryside house, they begin to face increasing challenges that test the limits of their tolerance and question the boundaries of their moral values.

The audience can't help but identify with the Danish duo and imagine how they would react in situations such as those depicted in the movie. What finally condemns Bjørn and Louise is their ineptitude to assert their own agency and confront their fellow humans with boldness, telling what they are actually thinking, regardless of the consequences. The fear of faux pas and coming across as rude ground them while also rendering them powerless to properly respond to their hosts' veiled insults and overall obnoxious attitude. Bjørn is the one most susceptible to these fears and his abidance to the -written and unwritten- rules of conduct is a burden that he has to carry around since his childhood. In the singular honest interaction between him and Patrick, Bjørn confesses that he has serious troubles expressing his desires. In Patrick's question regarding to the reason for that, Bjørn simply retorts: "Too many rules, I guess". He then declares his yearning for a simpler way of life with less socially controlled behavior and Patrick hatches an idea to help him cleanse his soul and find a let-out for his repressed emotions. Together, they drive to the middle of nowhere and they begin shouting to the tops of their lungs in a desperate attempt to feel a little better. Nevertheless, this brief interlude of reconciliation between the two men marks the beginning of the end as we subsequently enter in the final part of the story which slowly reaches its conclusion, raising the level of creepiness and further charging the atmosphere with the savagery being unleashed in the most barbaric of ways and targeting the most vulnerable character in the whole story.

Christian Tafdrup, despite his young age, proves with this work that apart for being a good actor, he is also a skillful storyteller and knows perfectly well how to utilize suspense, remaining in control of the pacing throughout the film's runtime and progressively disclosing the shocking plot points that leave the audience in no doubt regarding the true motivation that lurks behind the invitation. Tafdrup's involvement in the script, along with his brother, Mads Tafdrup, showcases a multi-dimensional artist and leaves many promises for a bright future in the field. The -thoroughly and utterly disturbing in every possible sense- story is tightly crafted, with the screenwriters holding their finger on the pulse of the narrative and remaining consistent with their intentions regarding the emotions that they desire to evoke from the audience. It's been a long time since I've watched such a terrifying horror film, reminding me, once again, that gory scenes and exaggerated use of violence is redundant for a talented artist who prefers to make the difference counting on the actual storytelling form, procedure, and dialogue. The actors are all on top form and I believe that Morten Burian's portrayal of Bjørn is worthy of an award, as he succeeds in illustrating his character's inner struggle, his torn selfhood that is now embedded as a fixed reality in his consciousness, and the frantic desperation he undergoes in the finale. Fedja van Huêt also shines with his performance as Patrick, conveying all the repulsiveness and loathsomeness of the character.

I think that Speak No Evil is one of the most outstanding horror films of this year and I am happy to see that the movie has been widely reviewed around the web, with the ratings being more than positive. That proves that despite the highly distressing nature of the story told, the audiences are thirsty for meticulously crafted productions, emphasizing on the more artistic aspects of cinematic creation. A word of caution, though, this is not a movie for the weak at heart or stomach, so beware. 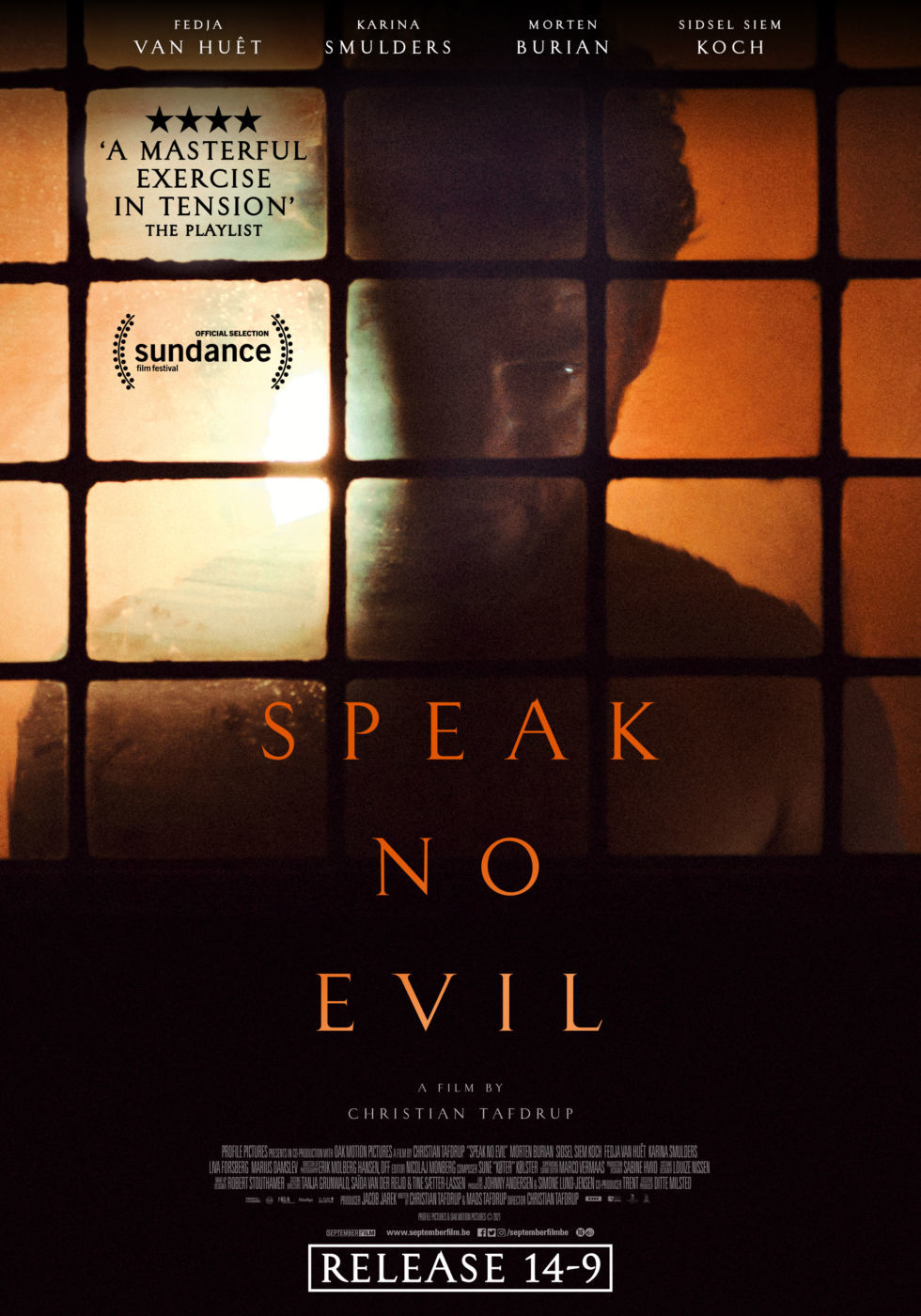