One of the most underrated recent Netflix productions, Small Crimes is a delightful crime film featuring outstanding performances and a serpentine plotline. Nikolaj Coster-Waldau (Game of Thrones, Exit Plan) is Joe Denton, a disgraced ex-cop who gets released from prison after being incarcerated for six years for killing another man while being drunk. His hopes for a happy reunion with his estranged family and a successful reintegration into society get instantly crushed as it seems that nobody, not even his own parents, are willing to forgive his past misdeeds. Joe's former acquaintances are out to get him as he has left a lot of loose ends prior to his arrest. The protagonist will have to navigate his way through the traps and thorns set by his enemies in order to find absolution for his sins.

Reading the online ratings and reviews, I was expecting nothing more than a b-movie, but even from the opening scene Small Crimes demonstrated a special, almost singular, quality which quickly developed into an arresting, action-packed story that combines elements of black comedy with a realistic depiction of the hard reality faced by those who carry a dark past. Joe Denton is portrayed as a blemished character filled with flaws and defects, nevertheless retaining his human stature as expressed through his interactions with the people who can see the good in him. Coster-Waldau delivers a memorable performance, proving that he belongs to the elite of contemporary European thespians and his presence commands the screen.

There are plenty of other experienced actors such as Gary Cole (One Hour Photo, Office Space), Robert Forster (Mulholland Drive, Jackie Brown), Molly Parker (House of Cards, The Wicker Man), and Jacki Weaver (Animal Kingdom, Silver Lining Playbook) completing the movie's cast. The noirish mood which pervades the film springs from the masterful direction by E.L. Katz and the eccentric characterization of the rather unlikeable individuals surrounding the protagonist. All the characters in this movie seem to despise each other and their abhorrent behaviour leads to an explosive finale dominated by mayhem and slaughter. The audience can witness the progressive escalation of the story and relate with Joe's conflicting emotional state as his past returns to haunt him.

On the negative side, the plot sometimes feels overly complex and the audience often has to connect invisible dots in order to fully comprehend the backdrop of the story. The information relayed by the screenwriters seems to be insufficient especially in the first part of the movie. However, Small Crimes sticks to your mind with its beguiling atmosphere and tight script while its high production values renders it as one of the most understated crime dramas of the last few years. Fans of the classic film noirs of the 1940s and 1950s will definitely love it. 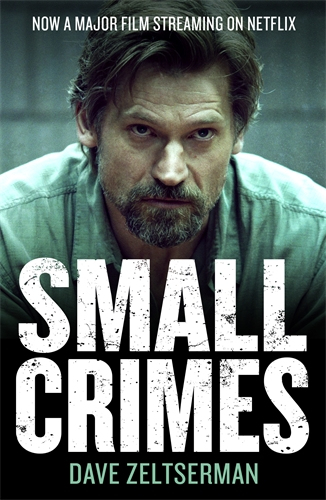