A nightmarish dystopia packed in a little novella. 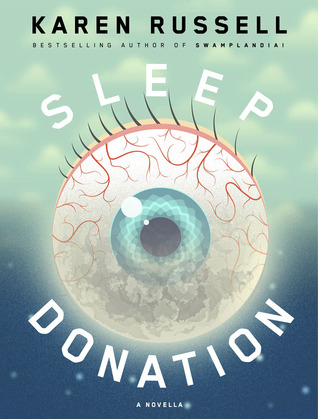 Nearly every novel that falls under the category of speculative fiction impels the reader to stretch the boundaries of his imagination, by introducing an alternative reality which often includes the supernatural element, futuristic aspects, and the dystopian factor. The books written by authors such as George Orwell, Aldous Huxley, and Mary Shelley, to name only a select few, still remain a point of reference for literature connoisseurs and their cultural as well as moral significance is undoubtedly diachronic. Sleep Donation is a dystopian novella written by the American author Karen Russel, and despite its small length, it is a tale that packs a severe emotional punch, especially if read in the Covid-19 pandemic era as its main theme is a world surrendered in a lethal insomnia epidemic. Russel's debut novel, Swamplandia!, earned her the honor to be among the finalists for the 2012 Pulitzer Prize in Fiction and her work has been further bestowed with several awards such as the MacArthur Foundation's "Genius Prize" (2013), given to individuals who have shown "extraordinary originality and dedication in their creative pursuits and a marked capacity for self-direction". The versatility and originality of Russel's work is appreciated by an ever-expanding readership that becomes enchanted by the literary craftsmanship in prose and the glowing imagination that distinguishes the author's novels from the generic titles that dominate the bestseller charts.

In Sleep Donation, Russel drives the reader into a nightmarish scenario in which the United States and the rest of the world gradually face the threat of extinction due to the outburst of a fatal epidemic that robs the people from their sleep. The causes for this disease are unknown and in order to cope with the desperation of the public, agencies are being initiated to seek people who are willing to donate their precious hours of sleep that will subsequently be transfused to the sufferers. The novella is set chronologically in the not-so-distant future and it is placed in America which is the country with the majority of insomniacs seeking treatment. The protagonist is a young woman, Trish Edgewater, who works as a recruiter for an organization called Slumber Corps, one of the institutions built in order to respond to the ever-growing demand for healthy sleep donors. Trish is one of the best scouts in Slumber Corps and the main reason is that she too has lost her sister, Dori, due to chronic lack of sleep, making her the ideal person to pitch for potential donors. Trish has perfected her spiel over the years and she is capable of convincing almost everybody to contribute to the cause. Her character is outlined as forceful, nevertheless vulnerable, especially as the story moves forward and she is faced with major ethical questions.

Six-month-old Abigail Harkonnen is the so-called "Baby A", the most cherished possession of Slumber Corps as she is the optimal donor due to her peaceful, uninterrupted sleep patterns, devoid of disturbances or nightmares. However her parents, Felix and Justine, disagree on whether it is good for the baby to be sucked out of her sleep. Felix is more than reluctant while Justine seems to be eager to support the organization, an inclination originating from a heightened awareness of her civic duty. Trish instantly gets close to Justine, though she has to use all her persuasion skills to get Felix in line. Things will become even more complicated when a young donor, "Donor Y", unwillingly infects loads of sufferers with a horrid nightmare that makes them averse to sleeping so as to avoid re-living the ordeal of the appalling dream. Those cases will be labelled as "elective insomniacs", a new breed that causes a major migraine to the bosses of Slumber Corps, Jim and Rudy. How will Trish and the agency deal with the new reality and is it possible to envisage a permanent solution to the problem? These questions are constantly present throughout the story which gradually becomes darker and more disturbing.

The first part of the novella is a testament of Russel's talent to craft beautiful prose by employing advanced vocabulary and accuracy in grammar and syntax, transporting the reader in an alternate universe where humanity is set against a debilitating mass disease turning healthy people into living zombies, thirsty for any kind of remedy that will offer some kind of relief from their terrible predicament. The author's unique writing style forces the reader to keep his attention to the text, careful not to miss a single word as that would threaten to spoil the lavish literary mosaic that supports the bleak story. There are some reviewers who find Russel's prose to be over-complicated and argue that it is not necessary to load the text with unnecessary similes and other figures of speech that the author seems to favor. In my opinion, Sleep Donation is one of the most well-written novellas that I've read in the last few years and the images created by the text became so vivid in my mind's eye that made me feel like I was inhabiting the story's place and time. However, there is a negative aspect concerning the pacing of the story which slows down after a measured first half. The second part is a bit underwhelming and the story seems to lose its spark, and as we approach the finale, we realize that there will be some loose ends that will not find their respective answers.

The ending is abrupt and doesn't do justice to an otherwise captivating story. We are left dangling as Russel closes her novella in an ambiguous manner that will certainly baffle the majority of the readers who expect a denouement matching the originality of the storyline. Nevertheless, Sleep Donation is a book that you should get your hands on, particularly if you are a fan of dystopias that challenge the realistic status quo and prompt the reader to think outside the box. Apart from the ethical questions raised by the author that would make a nice subject of conversation for you and your friends, there is the sheer pleasure stemming from the text's quality and literary hypostasis, a fact that renders this novella a must-read for every fiction enthusiast who is tired of the formulaic, mass-produced books that, unfortunately, constitute the rule of today's publishing world. As this was my first contact with Karen Russel, I would urge you to learn more about the author and further explore her body of work which is highly esteemed among her peers. This was a pleasant surprise for me, a reader who is not keen on science or speculative fiction, and made me reconsider some of my prejudices regarding the value of genres that I tend to avoid. Read Sleep Donation and you will have made yourself an inestimable gift.