QUICK REVIEW: Since We Fell by Dennis Lehane

Another success by Dennis Lehane. 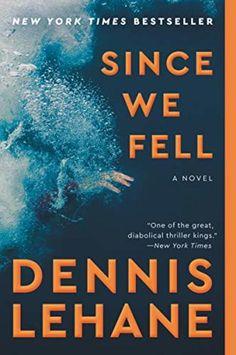 Dennis Lehane, known mainly through the Hollywood adaptations of his novels (Mystic River, Shutter Island, The Drop), delivers another entertaining story in Since We Fell. It is narrated through the protagonist's point of view, Rachel, who is a journalist with murky family history and also prone to anxiety and panic attacks. At the beginning of the novel, we are introduced to the character of Rachel and her desperate attempts to find her unknown father and the emotional turmoil that she has to endure due to the problematic relationship with her mother, Elisabeth.

The plot of the novel is divided into three, equal in terms of length parts, the first being the presentation of the main character and her professional and family history. In the second one, the plot begins to thicken as Rachel, now married with a fellow named Brian Delacroix, discovers that her husband is keeping secrets from her and she starts to obsess about the possible reasons that Brian seems to constantly deceive her. This part ends -literally- with a bang and the final section, the climax of the story, concludes a satisfying, though not unforgettable, plotline.

Perhaps I've read too many crime fiction novels and I've become a bit hard to surprise but I don't think that Since We Fell stands out as far as originality is concerned. On the other hand, it as a very well-written book as Lehane's prose is excellent -a trademark of his- while the outline of the characters so detailed and subtle that the reader easily identifies himself with the protagonist and her troubles. Dennis Lehane's writing style quality guarantees entertainment and he is worthy of his success and reputation, but I think that he has written better books than this one.