This is an audiovisual account of the journalistic investigation carried out by New York Times reporters Megan Twohey and Jodi Cantor regarding the allegations of sexual harassment, abuse, and rape made by dozens of women and covering a timespan of several decades, against the co-founder of Miramax production company and prominent movie mogul Harvey Weinstein. The scandal unhorsed Weinstein from his prominent position within the film industry as he was exposed as a lustful sexual predator exploiting his status and position within the company to force his female employees as well as young actresses to engage in various forms of sexual intercourse with him. It should be noted that the journalistic coverage of the Weinstein case earned The New York Times and the The New Yorker the Pulitzer Prize for Public Service for the year 2018. Moreover the term "Weinstein Effect" was coined to describe that global trend in which sexual abuse allegations made against men of authority become disclosed to the public. Weinstein's prosecution also gave birth to the predominant "MeToo" movement which, during the last few years, became a beacon of hope for the victims of sexual abuse who were forced to live into shame and silence for several years. Some of them have been paid hush money by the company to secure their muteness regarding the Miramax boss's venal attitude and actions.

Since the initial report's publication in 2017 (to read the full article online click here), more than 80 women further accused Weinstein for similar offenses and in November 2017 popular Italian actress Asia Argento, daughter of the "giallo" master Dario Argento, led a group of women which released a list of over 100 allegations of sexual abuse committed by Weinstein. Eventually, Weinstein was sentenced to 23 years in prison on March 11, 2020 for sexual-related crimes. The infamy of his legacy still haunts the world of Hollywood and his name became equivalent to abuse of power and corruption within the filmmaking trade. However, in historical terms, Weinstein's downfall was the first step in a process that eventually led to an increasing number of victims speaking out against their tormentors, feeling empowered by the example of the American women who were bold enough to denounce an omnipotent producer, ultimately forcing him to face justice for all of his wrongdoings. The director of She Said, Maria Schrader chose the film's title consciously and intelligently as it features the second half of the cliched response "He said/She Said" used primarily by sexists and chauvinists who wish to downplay the newfound women's movement cause. In that way, Schrader brazenly declares her tonal intentions regarding the film by stating in the title that this is a story seen solely from the female perspective.

Schrader's film is an addition to the list of momentous journalism procedurals, consisting of titles that won over the audiences' hearts in the past, such as All the President's Men (1976), Spotlight (2015), and The Post (2017). The protagonists are the two journalists, Megan Twohey (Carrey Mulligan) and Jodi Cantor (Zoe Kazan) who delved into the investigation of Hollywood's darker side on their capacity as The New York Times reporters. Each one of the two women had to juggle their personal and professional lives and Schrader, intending to ascribe truthfulness in the depiction of her main characters, often interrupts the main narrative concerning the purely procedural aspect of Megan and Jodi's inquest in order to show them functioning within their personal space and beside their husbands. These interludes, apart from offering brief respite from the dialogue-based, central storyline, help the audience to form a more complete image of the two protagonists, bringing forth the more human side of both and making the audience all the more willing to root for their cause. Apart from their life partners' support which is underlined in the sequences shot at Megan and Jodi's homes, there are also the newspaper's editors, Rebecca Corbett (Patricia Clarkson) and Andre Braugher (Dean Baquet), who remain thoroughly supportive throughout the course of the movie and offer their precious advice when needed.

The majority of the film's runtime is consumed with the persistent attempts by the two reporters to make the victims talk, preferably on record, having to face the reticence and doubt of those women who firmly believe in the futility of publicly confessing their highly disturbing personal experiences with Weinstein. The only way to tactfully approach such a delicate matter is by trying to convince the humiliated women that they could make difference and maybe even prevent the predator producer from harassing new victims. Slowly, the tongues get loosened up and an ever-increasing number of Weinstein's employees and actresses who saw their career go to ruins after declining their boss's advances, resolve to speak to Megan and Jodi, urged by their own consciousness. Among them, there are some celebrities too, for example Ashley Judd who plays herself in a scene where she talks to Megan and recounts her professional relationship with Weinstein that ended bitterly when she denied watching him as he had a shower. Judd paid gravely for her rejection as Weinstein made sure that she would never land another critical part in a movie, destroying her career by exerting influence to his friends in the industry who were responsible for the casting in the prospective projects.

The director opts to subtly introduce her own, subjective view on the subject of sexual abuse committed by powerful men that is not perceived as a problem created by certain individuals but rather as a systemic issue that is strongly linked to institutional hierarchy as manifested in the universe of the American movieland. There is much more latent corruption at every level of the filmmaking process with men being the most likely offenders. Apart from being skilled and tenacious reporters, Megan and Jodi are also women, a fact that doesn't escape Schrader's attention as her desire is to deliver a feature that, apart from accurately informing the audience with the facts of this investigation, will inspire women all over to break the omerta imposed by the inherently flawed corporate structuring and power dynamics imbalance existing in Hollywood, favoring rich men and victimizing young, vulnerable women who seek the fulfillment of their dream to become a part of something as exquisite as the production of a motion picture. She Said is meant to give hope to the oppressed and offer voice to the tormented, proving that nothing is unattainable if one plucks up the courage to come forth and share his/her traumatic experience with the others.

Carey Mulligan and Zoe Kazan prove to be the perfect fit for their respective roles, though it is the supporting cast that steals the limelight in She Said, more specifically the ageless Patricia Clarkson who plays one of the protagonists' editors overseeing the investigation and sharing her vast experience with them and Jennifer Ehle as Laura Madden, a young woman hounded by Weinstein. Samantha Morton is brilliant in the role of Zelda Perkins, Weinstein's ex-assistant and one of the women who actively helped the two New York Times journalists in exposing the boss of Miramax to the eyes of the public. This is not a movie that will appeal to the thrill seekers and action lovers as it features a slow-paced narrative, which is based on the actual investigation made by Twohey and Cantor as presented in their book She Said: Breaking the Sexual Harassment Story That Helped Ignite a Movement, which moves forward with each breakthrough achieved by the duo of reporters as they are documenting the victims' words and organizing their notes to prepare for their groundbreaking article. At the same, we get a glimpse into their family lives, Twohey fighting postpartum depression and Cantor struggling to be a decent mother for her two daughters, with the director's intention being to make them even more relatable for us. Schrader's She Said can be watched as a historical piece on a scandal that had tremendous impact throughout the globe, a true-to-life account of the lives of investigative journalists, their perseverance in gathering the necessary sources and quotes for their article, the organizational skills required to arrange the collected data in a meaningful way, and the act of writing itself in way that awakens the moral reflexes of the readership, are the most essential aspects of the job. It is also a film that will also appeal to modern-day feminists who thrive in the various manifestations of the "MeToo" movement as well as to those who are specifically interested in the chronicle of Harvey Weinstein's downfall, as an example of a man of excess who lost everything due to his vices. If you enjoyed Tom McCarthy's Spotlight and Steven Spielberg's The Post, then you ought to try this one out without a second thought. 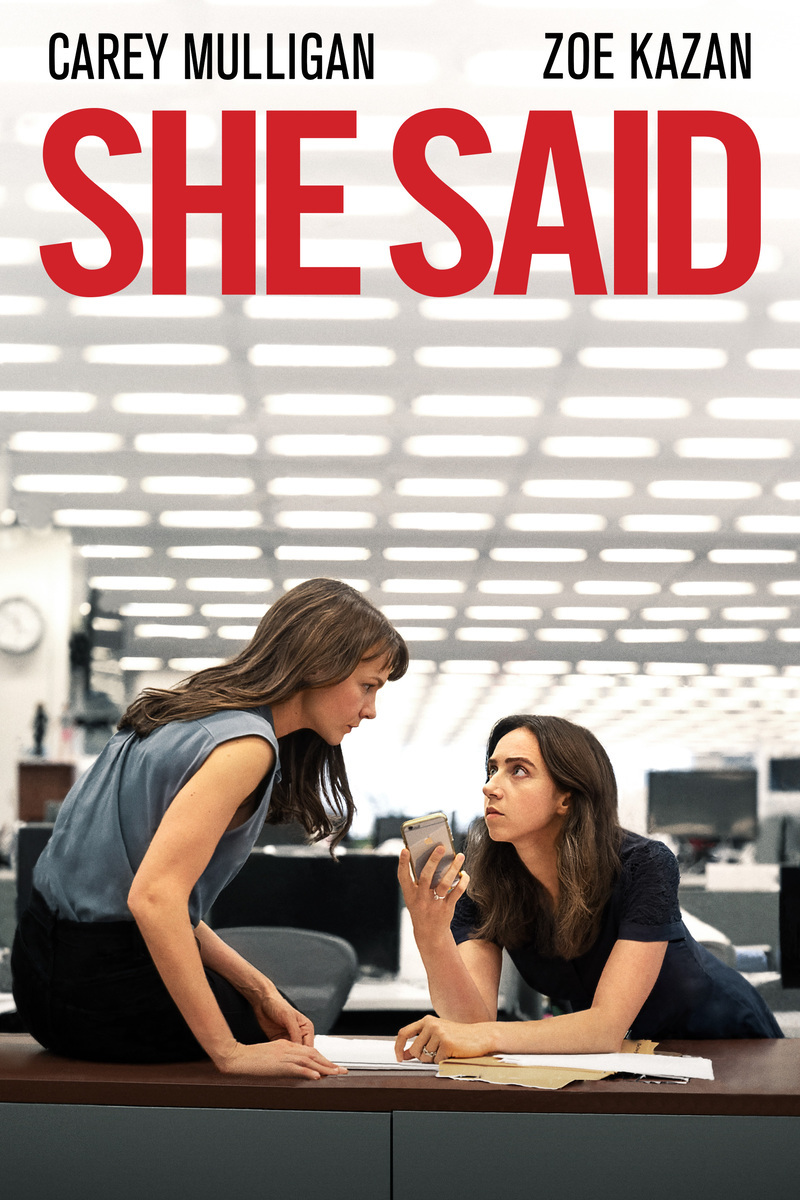