This is the first feature film directed by the acclaimed English auteur, Danny Boyle, and it also marks his first collaboration with screenwriter, John Hodges. Two years later, in 1996, the two of them will create the cult classic, Trainspotting, an adaptation of the titular novel written by Irvine Welsh. Furthermore, Shallow Grave marks the first feature starring role for Ewan McGregor who would also cast in Trainspotting as Mark Renton, a young junky striving to survive in the murky drug underworld of Edinburgh. There are more actors that the audience would meet again in Trainspotting such as Peter Mullan, who plays a vicious thug in this one, and Keith Allen. The producers of the film had to overcome severe budgetary restraints and they "had to auction off various props in order to raise enough money to buy essential film stock needed to complete the picture." The film was shot in 30 days and the director, along with the protagonists, stayed at a four-bedroom flat in the period leading up to production. The final result is a memorable, low-budget, crime film about a group of friends and flatmates who are lucky enough to find a suitcase full of money after a man dies in their apartment. The main focus is on the relationship between the three youngsters and how extreme circumstances and intense pressure can rupture the bonds of friendship.

Shallow Grave begins with the three protagonists, Alex (Ewan McGregor), David (Christopher Eccleston), and Juliet (Kerry Fox) who are searching for a fourth flatmate who will rent the spare room in their apartment. The audience can take a first glimpse of their cynicism and viciousness as they love to taunt the prospective roommates in a manner that comes off as rude and cruel. When a middle-aged man who, according to his own admission, is a novelist appears in their doorstep, the trio will decide to accept him. Of course, their approval of the newcomer is heavily dependent on the vast amount of cash that he seems to carry. Soon, the new tenant will be found dead in his room and after a quick search of his belongings, Alex finds a suitcase that is filled with banknotes. From that moment on, the lives of the three protagonists will change radically as they will be forced to face the difficult question: call the police and report the death or keep the money and their mouths shut? the answer is obvious and the movie's plot has many surprises, twists, and turns for the three main characters as two thugs who commit brutal murders are searching from the dough and they will stop at nothing until they find it.

The situation progressively escalates and finally spirals out of control when paranoia and suspicion take over David's character, portrayed remarkably by Christopher Eccleston. David is the most interesting character among the three and his transformation from the initially shy, deferential guy to the disturbed individual we are watching, in the end, is masterfully crafted. Of course, both McGregor's and Kerry Fox's performances are top-notch, though Eccleston stands out perhaps due to the essence of the character that he impersonates. Overall, Shallow Grave is a compelling cinematic experience and also a movie that won critical acclaim as when it debuted at the Cannes Film Festival, the organizers had to set up three extra screenings just to meet demand. is a dark and gritty picture and the main characters are unlikable, if not appalling. Danny Boyle in his directorial debut seems to espouse a rather pessimistic view on human nature and the reality regarding friendship. It should be seen by those who enjoy slow-burning, character-oriented crime films that steer clear of the genre stereotypes that plague most of the contemporary productions. Moreover, if you are a Danny Boyle fan, this is a must-see and the same goes for all Euro-noir aficionados. 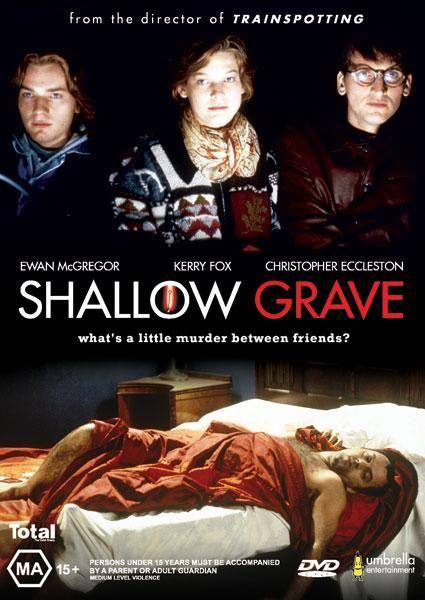