America has always been torn apart by racial tension between the, mostly white, authorities and the Black and Latino minorities. The events that took place in Ferguson, Missouri in 2014 and the more recent unrest caused by the death of George Floyd in Minnesota in 2020 gave prominence to a heated debate concerning the discriminative behavior of the police force against the Black community. The riots were so severe that forced the American intellectuals and political scientists to re-evaluate their stance on the appeals of the Black community for equality and egalitarianism. The rise of alt-right political parties in the Western countries during the last two decades further complicated the matter and today the world seems to balance on a thin line regarding human rights and the successful acculturation of minorities.

Seven Seconds is a 2018 television series set in New Jersey where a hit-and-run accident resulting in the death of a teenage black boy ignites the touchpaper for rebellion among the Black community which demands justice. The show explores many purely socio-political themes such as victimization and corruption while at the same time narrating a captivating crime story that unravels through the course of ten episodes of one hour each. The creators of this high-end production also emphasize on the grief experienced by the family of the victim and accurately depict the mourning process as expressed by the experienced actors who portray the parents of the boy.

In the opening scene of the first episode we watch as Pete Jablonski (Beau Knapp), a recently transferred Narcotics and Anti-Gang detective, drives through Liberty Park talking with his pregnant, hospitalized wife on the phone when he suddenly hits something on the road. When he gets out of his car, he realizes that he has hit a human being riding a bike. Immediately, he contacts his superior officer, Mike DiAngelo (David Lyons) who arrives at the scene along with two other members of the team. DiAngelo convinces Pete to flee the scene and promises him that he will take care of the situation. Pete reluctantly agrees and DiAngelo's team tamper with the crime scene in order to erase any possible evidence leading to Jablonski.

KJ Harper (Clare-Hope Ashitey) is a young black prosecutor who struggles with several personal challenges, often hitting the bottle when things become overly rough for her. She, along with detective Joe -"Fish"- Rinaldi (Michael Mosley), will take on the hit-and-run case and will soon realize that something is seriously off. As they investigate, they will uncover a huge coverup and in their quest to collect evidence in order to support their theories, they will be forced to go against a rotten system that includes people high up the police and judicial hierarchy. At the same time, the victim's mother, Latrice (Regina King), who doesn't trust the authorities will set off to locate her son's killer and punish him herself. Her husband, Isiah (Russel Hornsby), is watching his family and whole life falling apart leading to him adopting an apathetic attitude.

The mixed elements of distinct genres such as family and courtroom drama combined with a realistic portrayal of the challenges of police work in big cities plagued by gang activity and drug abuse deem Seven Seconds as one of the best titles offered by Netflix during the last few years. The audience is bound to appreciate the intriguing storyline and the top-notch performances by the cast while the creator of the show, Veena Suud, known for her involvement in popular productions such as The Killing and The Salton Sea, is responsible for the high production values and great optics of the series. There are plenty of moving sequences, especially those focused on the victim's family bereavement, and also a lot of well-crafted dialogue that comes across as natural and plausible.

Overall, I would warmly recommend Seven Seconds to all the fans of gritty, authentic crime dramas engulfing social aspects and you should brace yourselves for an intense viewing experience. The directors and screenwriters of this series do not provide easy answers to the burning questions raised by the story and there is no black-and-white distinction between the good and the bad guys. All characters, even those whose actions initially seem unjustified, have valid motivation for their behaviour while those who represent the prosecution team are rendered as human beings filled with weaknesses and flaws. It was refreshing to watch such a spirited show, standing out due to its ingenuity in the plot and graphic characterization. Do yourselves a favor and watch this one. 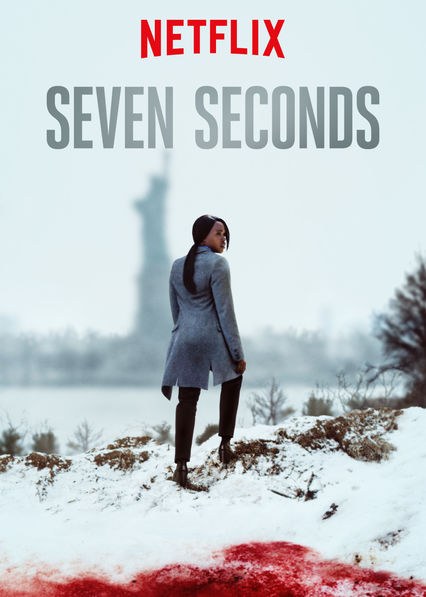