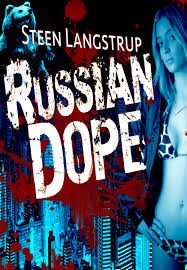 This is the second book written by Steen Langstrup that I've read, the other one being a short, horror story, titled Metro, and I believe that his name will become widely known in years to come. Russian Dope is a short-length, tightly-knit crime/gangster story set in Denmark's capital city, Copenhagen, in the late 90s.

The story is simple enough: two junkies and a young man named Paul find themselves in a tough spot when they attempt to steal two kilos of pure heroin from the Russian mob. What makes this novel stand out is the quirky type of narration, which is reminiscent of a classic crime fiction film, Pulp Fiction (1994). The narrative is fragmented and jumps back and forth in time formulating an intriguing puzzle which the reader has to solve to fully comprehend the story. The limited length of the book suits the story perfectly and there is not a single scene or chapter that can be considered redundant. Some carefully inserted plot twists are successful, adding to the overall thrilling sense of the story. Of course, the above limitation doesn't allow a proper character development but this doesn't matter as this is a purely plot-centered novel, based on the special way that the author chooses to narrate the story.

In conclusion, this is a little gem of Scandinavian crime fiction and Steen Langstrup proves to be a first-rate crime fiction writer whose work can be considered equal to that of the grand-masters of the Nordic Noir genre. I hope that soon we, as readers, will have the opportunity to indulge in books similar to Russian Dope.