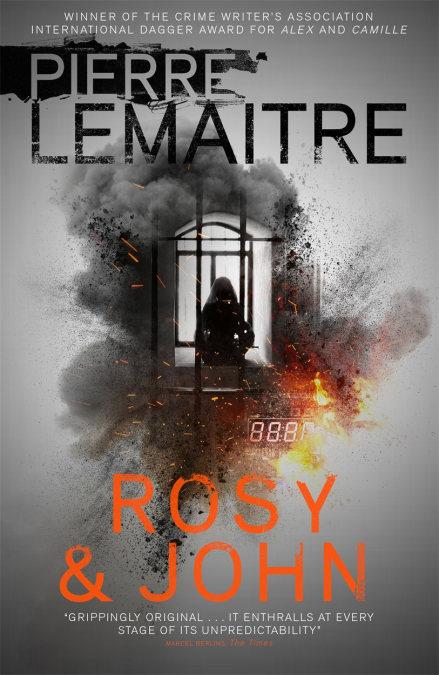 This is a novella written by the French crime fiction master, Pierre Lemaitre who is well-known to the global readership for his gruesome, violent thrillers that often illustrate the dark sides of the French society. Rosy & John is the interlude between Alex and Camille, the second and the fourth installment, respectively, in the renowned Camille Verhoeven series. Verhoeven is a man of minimal stature who, nevertheless, is one of the most experienced and valued members of the Brigade Criminelle in Paris. His physical handicap is counterpoised by a shining intellect and a killer instinct that usually helps him to apprehend some of the most heinous criminals in France. Readers who are familiar with Lemaitre's previous work will certainly be aware of the methods that Camille employs in order to get results and his tense relationships with some of his colleagues and superiors in the force. In this novella, however, Lemaitre focuses more on the main storyline which is explosive enough to keep the readers' attention focused from the beginning until the end. Camille will have to embark on a race against time when a bomb explodes in the center of Paris and the man responsible for the attack surrenders and tells the authorities that he has planted six more devices in various spots in the city.

Everything begins when a massive blast sends shockwaves to the residents of the eighteenth arrondissement in Paris. The impact is tremendous and it is a miracle that nobody dies, even though there are several men and women severely injured by the explosion. Camille listens about the event in the radio and decides to make a detour and visit the blast site in order to see with his own eyes what have happened. The forensic specialists conclude that the explosive device dates from World War 1, it is a 140mm mortar shell that remained unexploded somewhere on the outskirts of the city. The culprit doesn't hide from the authorities and surrenders himself immediately. He is a young man called Jean -"John"- Garnier and he demands to speak only to Camille. During his initial interrogation, Jean confesses to Camille that he has planted six more similar bombs in six different places and he is ready to tell the police where they are if they agree to release his mother, Rosy, who is incarcerated for the last eight months. Rosy was convicted for the murder of Jean's girlfriend, Carole, and Camille is dumbfounded as he cannot understand the motivation behind Jean's actions. If his mother really killed his girlfriend, then why Jean goes to such lengths in order to set her free? What is the secret that binds mother and son?

Due to the limited length of the book, the story unfolds in a frenetic pace and Lemaitre proves that he is a master of suspense, keeping the reader constantly on his toes as the threat of a possible carnage is always present and strong. Furthermore, the mystery revolving around the exact nature of the relationship between Rosy and Jean is equally captivating. The story has a lot of twists and turns and as the story reaches its climax all bets are off as nothing is what it seems. Camille's brilliance shines once again and the reader takes also some glimpses into his personal life and his relationship with Anne, the woman that he loves. It is always fascinating to delve into Camille's inner thought process and even though Rosy & John is just a novella, it bears all the trademarks of a Pierre Lemaitre novel: mystery, intrigue, an ominous sense of foreboding, quirky characters and many surprises. I was lucky enough to get this e-book through Netgalley and I want to sincerely thank the publisher for providing a free ARC. It's a delightful read, destined to challenge your wits and entertain you fully. Fans of Lemaitre should definitely add this novella to their TBR list and keep in mind that it's an ultra-fast read that can be completed in just one sitting.