Thugs and smugglers in Iceland.

One of the most underrated Icelandic gems of the last fifteen years, Reykjavik-Rotterdam is a film that blends elements from various genres such as black comedy, gangster movie, and thriller, succeeding in capturing the audience's full attention due to its masterful directing and photography as well as the first-class performances from an all-star Icelandic cast including Baltasar Kormakur, in one of his rare on-screen appearances, Ingvar Sigurdsson, Ólafur Darri Ólafsson, Jóhannes Haukur Johanesson, and Magnús Jónsson. The director, Óskar Jónasson, collaborated in writing the screenplay of the movie along with one of the most iconic authors of Icelandic noir, Arnaldur Indridason. Indridason is widely known for his infamous Inspector Erlendur series which has sold millions of books worldwide in the last few decades and his participation in the creation of the story guarantees a thrilling viewing experience featuring a tight script and no plot holes. It should be added that the film has been remade for American audiences by Kormakur, under the title Contraband, starring Mark Wahlberg and Kate Beckinsale. Even though the American version puts the emphasis more on the action aspect, the original stands out due to its originality and great work by all the actors. Plus, the humorous aspect is more evident in the Icelandic version, and this is one of the foremost reasons to watch it first.

It's a film that will make you laugh hard on more than one occasion, nevertheless, the actual main storyline is a bit distressing as the main character, Christopher (B. Kormakur), is forced to return to his old ways as he accepts to make one last trip from his hometown Reykjavik to Rotterdam in order to carry contraband alcohol and drug substances that will help him face an imminent family financial crisis. Christopher has a shady past as he had spent six months in prison for a similar offense a few years back. His wife is enraged to hear that he will embark on this trip to Rotterdam even if Christopher swears that it will be the last. At the same time, Christopher's friends and enemies put heavy pressure on his wife, Iris, during his absence as there are plenty of people involved in the drug-smuggling scheme. Christopher will have to keep it together as the ship he is working on reaches Rotterdam and he will have to find a way to save his beloved family without ruining the business. But unfortunately, our protagonist realizes that he hasi another big problem when his friend, Steingrimur (I. Sigurdsson) begins to stalk Iris during Christopher's absence.

The movie features several crooked and slippery characters, vicious thugs, backstabbing friends, and weak people who accept to do anything in order to save their skin or earn a few dimes more. There are several sub-plots that slowly become intertwined as the story progresses forward and the writing team does an excellent job both in crafting a gripping plot but also in creating plausible, valid characters. The dialogue parts are filled with subtle humor that adds to the overall odd atmosphere which pervades the film and as the story unravels, the viewer invests and roots for the protagonist who is essentially a decent man even if some transgressions of the past still cost him and make it difficult to find a proper job. In the end, Christopher will have to face his worst nightmare and this will be his last challenge as the movie reaches its climax. The story is narrated through the perspectives of Christopher who is traveling in the sea and his wife's Iris who receives plenty of sinister visits by local thugs, demanding that their delivery will reach safely in Reykjavik. It is a fine contrast, being transferred from the claustrophobic confines of a cargo ship to the urban life in the capital city of Iceland and the director makes the most of it.

Reykjavik-Rotterdam is a short film, under 90 minutes, nevertheless, the viewer has to follow closely the tight story in order to be up to speed about what's happening on-screen. In my opinion, this is a movie that should be more widely known and appraised as it features some of the most important names in Icelandic cinema and also narrates a great crime story. If you enjoy gangster films with splashes of black humor and memorable performance, then this is definitely a picture you wouldn't want to miss. Kornakur proves that except for being one of the most inspired contemporary European auteurs, he is also a marvelous actor as he portrays Christopher with cunning and bravado, dominating the screen from the beginning until the end. Johannes Haukur Johanesson is delightful as Eirikur, the thug who becomes Christopher's worst nightmare while Ólafur Darri Ólafsson plays a secondary role as one of the ship's crew. It's a much better movie than Contraband and it's recommendable to all cinema lovers around the world. 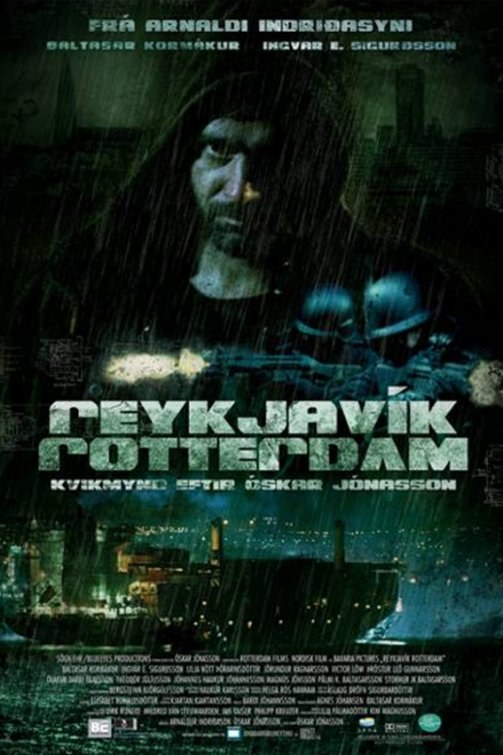