Atom Egoyan's Remember is a character oriented revenge story interspersed with splashes of pure drama and exuding an overall nostalgic feeling that resonates with the audience, mainly because of the film's circumspect direction and the exceptional performance by Christopher Plummer. The veteran American author delivers a cogent portrayal playing the protagonist, Zev Guttman, an elderly German Jew suffering from the early stages of dementia and experiencing frequent bouts of confusion and severe forgetfulness. Plummer portrait of Zev is profoundly humane and in his face, the viewer can discern the conflicting emotions and inherent desperation that drives his behavior and propels the movie's plot. Remember is a motion picture fully focused on its protagonist who is present in nearly every scene and his dire condition is the essential feature that dictates his course of action in his quest for revenge for a crime that took place several decades ago, during the Second World War in the notorious German concentration camp of Auschwitz.

It is a slow-moving story with little or no action parts, however based on a meticulously written script by Benjamin August who emphasizes on the plausibility of characterization and convincing dialogue that sounds real to the ears of the audience which is used to the stilted interactions that are found in the majority of today's cinema and television productions. We empathize with Zev and embrace his personal crusade to administer personal justice, even if that is a deed that is considered morally, and legally, unforgivable. Egoyan, perhaps not consciously, raises some critical questions about the ethics of vigilantism that are conveyed to the viewer in a non-forceful, non-didacting manner that illustrates his intention to create a subtle atmosphere that aims to make the viewer both emotionally and cerebrally implicated in the action without any kind of manipulation or moral preaching. The final result is a balanced film that succeeds in summoning up bittersweet feelings from the audience and developing sentiments of sympathy and identification with the protagonist.

Zev Guttman, an expatriate German Jew living permanently in the U.S. for several decades, is living in a care home for the elderly and in the first scene of the film, Zev wakes up calling the name of his wife, Ruth. When the nurse attending to him informs Zev that his wife died a few days ago, we understand that Zev is suffering from a serious neurodegenerative disease that compels him to be unable to take care of himself even in the smallest of things. After that initial expositional information about the main character, we meet Zev's closest friend in the hospice, Max, who tells him that before his wife's death, he promised something to him and it's time to fulfil his pledge. Thus, Zev escapes the care facility and begins a journey to several different places of the country in order to locate an individual named Ruby Kurlander, an ex-Nazi who served in Auschwitz and is responsible for the death of both Zev's and Max's families. There are 4 Ruby Kurlanders originating from Germany who now live in the States and Zev will have to trace them one by one and kill the man that destroyed his childhood.

In his long journey to vengeance, Zev meets people of his own age, Germans who survived the war but had nothing to do with the horrors of Auschwitz as well as some rather abhorrent people like the son of one of the Kurlanders, played by the Breaking Bad star Dean Norris, who proves to be an ardent Neo-nazi and assaults Zev due to his Jewish extract. Nevertheless, Zev's worst enemy is his own mind and his foggy mental state often makes him lose track of his movements and get immensely agitated with no obvious cause. It seems that his wife's demise cost him dearly and there are numerous times throughout the film where Zev is hopelessly calling for Ruth, a woman that was obviously precious for her husband, the still point of a turning world, the person to whom he confided in and loved with all his might. As Zev is crossing Kurlanders off his list, his family, son and daughter-in- law are frantically searching for him, worried and growing increasingly forlorn. The conclusion of the sad story is startling and emotionally devastating for the audience. In my opinion, the final twist is one of the most effective that I've seen in the last few years.

I think that Remember is one of Egoyan's most well-rounded films to date, packing a stark emotional punch and it's a movie that will move you and prompt you to perceive the main themes of the story, that is revenge and its relation with justice, in a whole new light. Apart from Plummer whose presence is a reason of its own to watch this movie, there are more seasoned actors framing the cast, the most prominent being the Swiss Bruno Ganz, known for his unforgettable acting in acclaimed productions such as the Downfall and The Lives of Others and Martin Landau, another experienced performer with a career that spans many decades in the American cinema. If you like slow-burning crime films and especially if you are a fan of vengeance stories on celluloid, then this title will satisfy your demands despite being a rather low-key production that is not widely known to the global audiences. You ought to give it a chance and in the end you will realize that at last you watched a movie that has something substantial to say and not a generic genre defined production. Remember can be deemed as belonging to a variety of different genres and this can only be a plus. Finally, I would like to say that is rather sad to see little gems like that being overlooked and I hope that such high-quality titles will eventually get the acknowledgement they deserve. 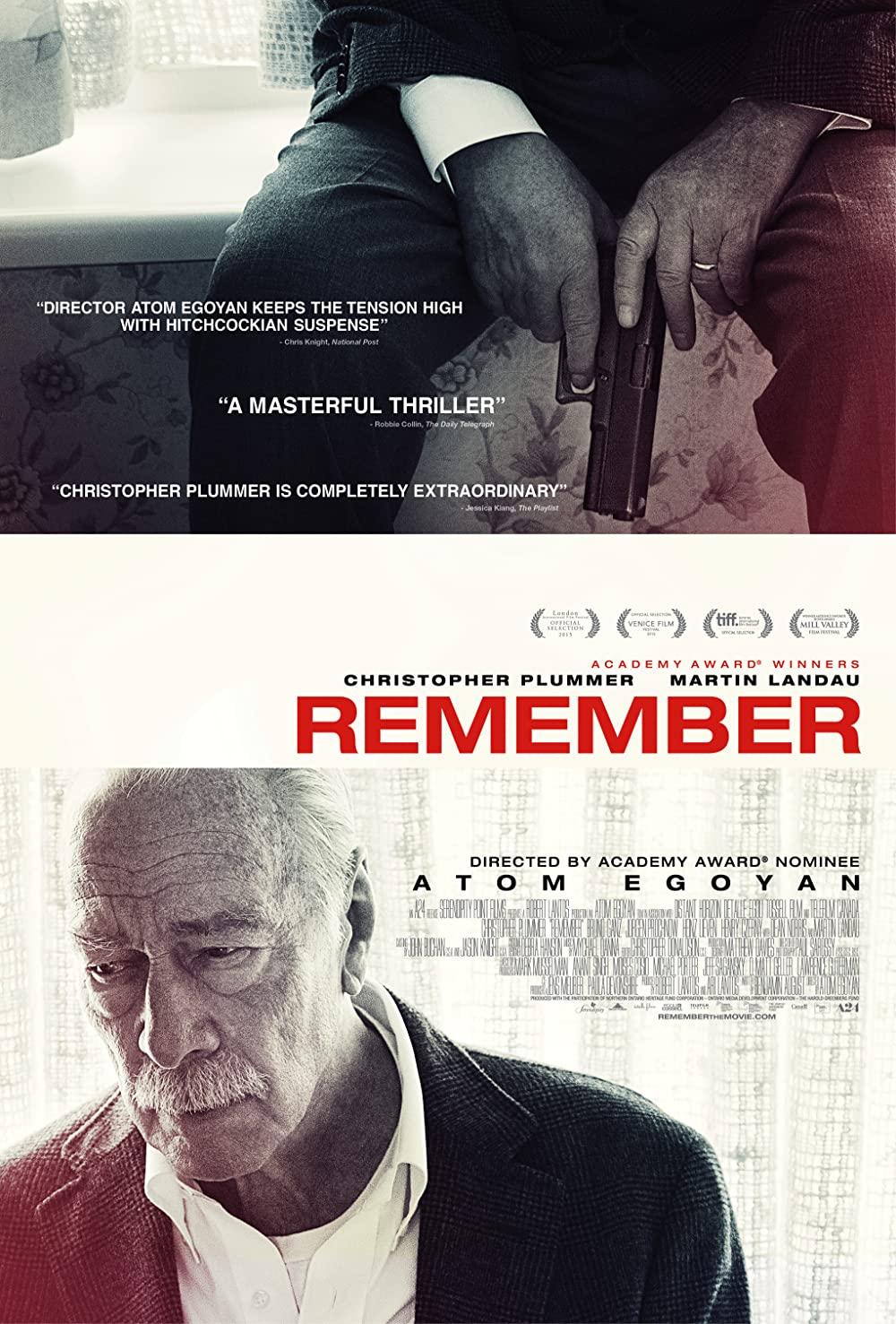