The conclusive chapter of an iconic trilogy.

This is the final installment in the exquisite Pusher movie trilogy and perhaps the best film of the three. Nicolas Winding Refn is the creator of all movies as he directed as well as wrote the screenplay for each one of them. Pusher III: I'm The Angel Of Death is the darkest and most violent chapter of the trilogy and it focuses on the character of Milo (Zlatko Buric), whom we met in the first film as the intimidating Serb heroin kingpin who haunts Frank (Kim Bodnia) in order to get the money he is owed. Milo also makes a brief appearance in the second part (Pusher II: With Blood On My Hands) where he meets Tony (Mads Mikkelsen) and Kusse Kurt in a hotel room in order to close a skag deal. Pusher III narrates a day in Milo's life that goes from bad to worse and ends up being a total nightmare. The movie begins with the Serbian druglord attending a Narcotics Anonymous meeting, struggling to keep his addictions at bay, where he says to the group that on that day he has to cook for more than 50 people as his daughter, Milena (Marilena Dekic) is celebrating her 25th birthday. At the same time, a nasty surprise awaits Milo when a car coming from the Netherlands and is supposed to carry heroin for his business, arrives in Copenhagen with a large stash of ecstasy pills. Milo has no idea about uppers, so he immediately contacts his sources in the city, the Albanian Rexho (Ramadan Huseini) and Luan from Skopje (Kujtim Loki). He finally decides to hold on to the pills and he assigns Little Muhammed (Ilyas Agac) to make the deed. Unfortunately, things will go all wrong and Milo will be forced to help Rexho and Luan with their business of trafficking prostitutes.

The most interesting part of the movie is Milo's character development. There is no trace of the terrifying, self-indulgent gangster that we met in the first two chapters. For the majority of the film's runtime, he seems to be out of his depth as he is not calling the shots as he used to while he is getting older and losing touch with the younger people who could help him in his line of business. We are witnessing a more human character featuring aspects that make him even sympathetic to the audience. The scene in which the young prostitute is meeting her potential buyers in Milo's restaurant is the most striking example. Milo is the only person who treats the girl with respect and he even offers her a cake for her birthday. The other characters in the film, including Milo's family and friends, are less than likable as Winding Refn attempts to explore the dregs of society in today's Copenhagen. It is worth mentioning that another familiar character from the first installment returns and that is Radovan (Slavko Labovic), Milo's trusted henchman who now lives a respectable life, owning a restaurant and staying away from his past lifestyle. However, when Milo knocks his door, desperate to find some help, he will help his old boss for old time's sake. The movie's final scene is exceptional with Milo smoking over an empty pool in his house. It is the perfect visual metaphor for the vacuum of the gangster lifestyle and is the best finale for one of the best crime movie trilogies originating from Scandinavia.

Pusher III is definitely the most disturbing movie of the trilogy, especially in the end where the audience watches bodies being dismembered and disposed by Milo and Radovan. The violence is graphic and gruesome, something that was missing in the previous two parts. It is a cruel film that refuses to embellish life in Copenhagen's underbelly and adopts a more realistic approach towards filmmaking. Winding Refn stated in an interview he gave that when he shot the first Pusher in 1996 he had no idea of how to make a movie. Nevertheless, nine years later he is more mature and knows what he wants from his creation. The film got torn apart by Danish critics and, according to the director and screenwriter, the reason for that was the fact that the movie features only immigrant characters: Serbs, Poles, Turks, etc. After that, Winding Refn decided that he would never again shoot a film in Denmark. So, he proceeded to make films in America such as Bronson, Only God Forgives, Drive, and other successful pictures that won appraisal from both audiences and the critics.

There was also going to be a fourth film in the series having Little Muhammed as the main protagonist but the actor who played the character was incarcerated in Denmark so the project was aborted. 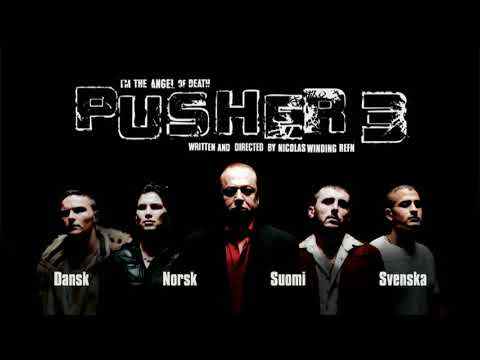