NOTE: This is a review based on the first 20 episodes of the television series "Pretend to Sleep" aired by the Hellenic Broadcasting Corporation (ERT) for the years 2022-2023. The show is ongoing and there is no certainty around the number of episodes remaining until the finale.

During the course of the last three decades, Greek television has produced and featured a vast array of programs, spanning multiple genres though always remaining largely focused on social dramas, pieces of historical fiction, soap operas, and romantic shows. Crime fiction has been severely mistreated and underestimated by the majority of the Greek producers, thus the respectable samples of the genre can be counted on the fingers of one hand with only few bright exceptions that confirm the general rule wanting crime shows to be perceived as low-quality products of mass culture with no true artistic value. The reignition of the native audience's interest in this kind of storytelling occurred in 2016, the year when Sotiris Tsafoulias delivered his second film under the title The Other Me (original title: Έτερος Εγώ), a production that scored highly on every aspect, featuring a typical serial-killer plot involving mathematics and cryptic proverbs proclaimed by the ancient Greek philosopher Pythagoras. The movie has been well-received by both the critics and the audience while the thirst that itself created for similar productions gave birth to a spin-off TV series by the same creative team, keeping the title plus an additional word (The Other Me: Lost Souls, The Other Me: Catharsis), the first two parts in Tsafoulia's intended trilogy that will end next year with the release of the third and final season, The Other Me: Nemesis.

From then on, there has been an ever-increasing activity around the production of crime fiction shows and this new trend culminated in thιs year's airing of the utterly suspenseful Pretend to Sleep (original title: Κάνε οτι κοιμάσαι) by the Hellenic Broadcasting Corporation (ERT). ERT has a reputation throughout Greece as one of the most "serious" providers of above-mediocre quality television series and its program has been ornated with several prominent documentaries, talk shows, and prolific shows of historical fiction, some crime fiction as well as high-end dramas. However, there has never been so far a production so compelling as this latest feat by directors Alekos Kyranis and Alexandros Pantazoudis who collaborated with author Giannis Skaragas, known to the Greek audience for his novel The Surface (Επιφάνεια) that has been successfully adapted into TV series in 2001, and together they weave a high-octane crime/thriller, not shy of action and with a tense atmosphere that compels the viewer to watch, at least, one more episode each time. The show will be running for the full year and so far, we have watched the first 20 episodes that definitely constitute a secure basis for a detailed review to be written.

The main, but not single, protagonist is Nikolas Kairis (S. Papadopoulos), a philologist working in a school of an underprivileged neighborhood where tension rises high within the classes and cases of bullying are always cropping up, causing migraine to the teaching staff. It is not a random choice by the screenwriter that the very first scene in the series depicts two teenage boys chasing one of their classmates, threatening and harassing him for some reason. Kairis, as deus ex machina, appears at the right moment and ends the episode, though in a controversial way that will put him at the crosshairs of a sinister gangster, Ilias Vandoros (T. Giannopoulos). During the first two episodes Nikolas will be approached by an enigmatic woman (E. Koliandri) who will be introduced as the mother of one of Nikolas's most beloved and vulnerable students, Makis (Vasilis Darmas). After a one-nightstand at a cheap hotel, Nikolas realizes that he has lost his keys and from then on, a nightmarish scenario will unfold, climaxing in the home invasion by three masked gunmen in Nikolas's residence, an event that concludes with the fatal shooting of his wife, Evangelia (M. Aslanoglou), and the serious injury of his stepdaughter, Nasia (G. Mesariti) who immerses in coma. Struggling to cope with the grief as well as understand the reason why all those terrible things happened, Nikolas will become entangled in a web of lies, backstabbing and deceit that will make his personal investigation even harder.

In the above paragraph, I have outlined, in the most general of terms, the basic premise of the plot that is intricate and multi-faceted and cannot be summarized easily in the restricted space of a single TV series review. The story involves many players, I have already mentioned some of the most significant, and the tempo is steady, sometimes moving a bit too slowly, others marching on at a brisk pace. At this point, I have to admit that I was thoroughly disheartened when I read somewhere in the web that the show will be completed in more than 60 episodes, something that -if it is true- makes the production nearly impossible to maintain a high suspense level. Until now, fortunately, this is not the case, but one can't help but being circumspect about the ability of the screenwriter to keep the interest about the story alive in so many episodes. I guess we will have to see. As far as the acting is concerned, there is a striking unevenness between the performances by the members of the cast as there are those who hold their own well while others are struggling to deliver their words from the script. Spyros Papadopoulos is known in Greece as a comedian and show host, but he has never proven that he is something more than an one-dimensional actor and in Pretend to Sleep his inadequacy is more than obvious. On the other hand, Tasos Giannopoulos and Emily Koliandri are splendid in their respective roles, elevating the show's overall value as a work of art. Koliandri, more specifically, is the perfect fit for the role of the femme fatale, equally cunning and dangerous, both due to her singular looks and her hefty acting talent.

In my opinion, Pretend to Sleep is a breath of fresh air for the Greek audience who was really thirsty for such a television production, and I hope that the ratings will confirm that the production has been appropriately appreciated by the native audience. The series stand at the same level as much-acclaimed foreign crime dramas originating from either G. Britain, the Nordic countries, or the United States. I sincerely hope that this show will become the ground zero for all the forthcoming television productions of the genre, so observe it closely. 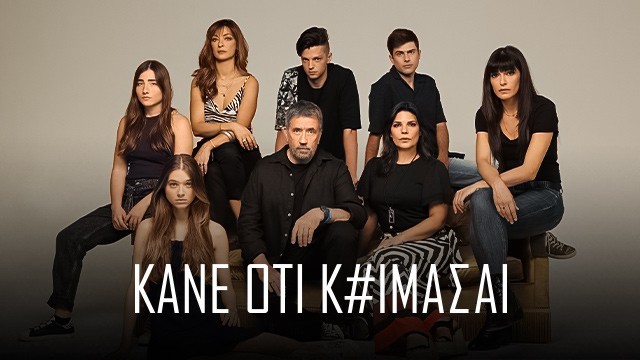