The origin story of a beloved character from the 1950s.

WARNING: The article below contains some spoilers.

Los Angeles, 1932: an infant, Charlie Dodson, is snatched from his parents' house and a hefty ransom of 100.000 dollars is demanded from the kidnappers in order to return the baby. Unfortunately, things go dreadfully wrong and Charlie turns up dead, suffocated and with his eyes stitched open. The boy's father is considered a suspect by the authorities and he is soon arrested for the crime, but it is quickly proven that he is actually innocent. Next in line is Charlie's mother, Emily Dodson, who is also arrested after the police find out about her extramarital affair with one of the alleged abductors, John Gannon. Emily is a rather vulnerable individual who is plagued by guilt as she believes that her affair contributed to her son's untimely demise. Famous lawyer E. B. Jonathan takes on Emily's case and he is certain of his client's innocence, but he needs concrete evidence to be able to defend her in court.

Enter Perry Mason, a private investigator who undertakes small-time cases like surveilling celebrities and taking dirty pictures of them while at the same time extorting his clients for some more cash. He is tormented by his traumatic past as a soldier in France and he has a family that wants nothing to do with him anymore. His disheveled appearance deems him a rather untrustworthy fellow, nevertheless, he is hired by E. B. Jonathan, who is also Mason's mentor, to find the truth behind Charlie's abduction and murder. Perry, along with his sidekick Pete Strickland, will embark on an adventure that will require strong resolve as the investigative duo will be opposed to an omnipotent power structure that involves corrupt cops, ambitious prosecutors and prospective mayors who don't give a hoot about justice, reluctant witnesses, and a mountain of setbacks including E. B. Jonathan's suicide in the middle of their investigation.

Perry Mason is a popular character coming from the 1950s, a creation of the detective fiction author, Erle Stanley Gardner who wrote 82 novels and 4 short stories featuring the nominal criminal defense lawyer. The character was adapted for both motion pictures and television series, the most successful being CBS's show, Perry Mason, running for nine years (1957-1966) with Raymond Burr in the role of the titular advocate. The second, in chronological order, adaptation ran from 1973 to 1974 under the title The New Perry Mason, starring Monte Markham. Furthermore, during the years 1985 to 1995 more than 30 television films featuring Perry Mason ran and Burr played the role in 26 of them prior to his death in 1993.

HBO's version of Perry Mason is quite different from the previous ones and the number one reason is that the show narrates the beginning of Mason's career as a barrister and his previous occupation as a private eye, a period that remained unexplored before this adaptation. Many reviewers found it really hard to recognize the character that they loved through Raymond Burr's polished performance and in a way they are right, though if they were patient enough to follow through the season's eight episodes they would see that from the fifth episode onward, Perry becomes a lawyer and he is the one that finally defends Emily Dodson in this high-profile trial. There is a lot of negative criticism about this production around the internet but it chiefly emanates from those viewers who are familiar with the previous adaptations of Erle Stanley Gardner's work.

Perry Mason is an excellent neo-noir with a story that is plausible, fabulous performances by all members of the stellar cast, and captivating cinematography that transfers the viewer a century backward in the city of angels. In many aspects, the show's dark, gritty vibes and gory visuals are reminiscent of James Ellroy's work, the American giant of crime fiction who used Los Angeles as the setting for most of his novels. Emmy-awarded Matthey Rhys does a terrific job as Perry while the supporting cast features well-known thespians such as John Lithgow, Tatiana Maslany, Robert Patrick, Shea Whigham, and Lili Taylor.

Half murder mystery, half courtroom drama, Perry Mason is a brilliant production that will satisfy even the most demanding of audiences with its elaborate plot, compelling characterization, and accurate depiction of a long-gone era. Keep in mind, that Perry is not the only Gardner's character that is enlivened in this show as there is also Della Street (Juliet Rylance), Paul Drake (Chris Chalk), and Detective Holcombe (Eric Lange) who also feature in the story. This is a show that will appeal to film-noir lovers and those who enjoy films such as Chinatown, L.A. Confidential, Black Dahlia and Mulholland Falls. In my opinion, this is one of the best shows produced in 2020 and I hope that a second season will follow with Perry engaging in an equally absorbing criminal case. 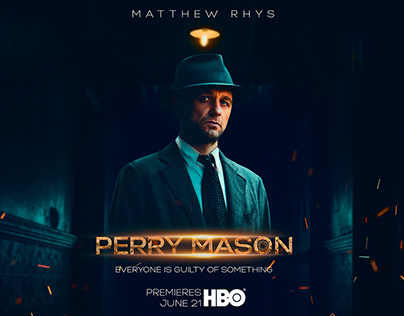