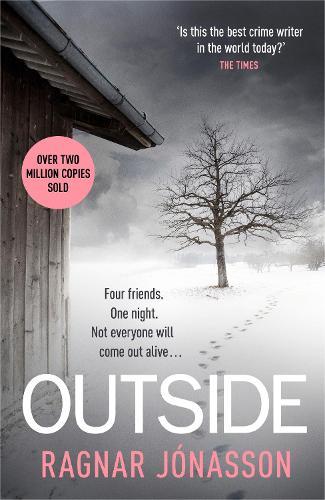 More a novella than a fully fleshed crime novel, Outside is Ragnar Jonasson's latest standalone. The acclaimed author delivers a claustrophobic story set in the Icelandic wilderness where every man is for himself and the extreme weather conditions force people to reveal their true, inner self. The germ of the plot is simple enough: four friends decide to go for an adventurous weekend to hunt ptarmigans, but they face their worst nightmare when they arrive in an isolated hut, a kind of refuge for hunters and hikers. The book can be categorized as a mystery or a thriller, even though there is a subtle horror aspect embedded in the story which unfolds through the course of two days. Jonasson adopts a multiple perspective narrative and we get to see through they eyes of all four protagonists who have more than one skeletons at their closets and the narrative moves forward swiftly as the author chooses to include small but concise chapters in which each character reveals their inner thoughts.

Armann, Helena, Gunnlaugur, and Daniel are friends from college who reunite in order to go for a hunting trip deep in the country's isolated moors. Their history, which is revealed gradually, is complex and in many ways troubled as the years that have gone by changed them in more ways than one. Daniel is permanently residing in London in order to pursue an acting career, Gunnlaugur is working as a lawyer fighting to overcome the boredom of the job, Armann is an ex-drug addict who has become one of the most prominent entrepreneurs in the country, while Helena is still grieving the loss of Vikingur, the love of her life who died of exposure a few years ago. As they reach the hunting lodge, the reader gets a glimpse into the dynamics of their relationships and the author establishes the setting of his story. The next day, they go hunting but as they reach a small hut in the middle of nowhere in order to guard against a raging blizzard, they make a gruesome discovery.

From then on, the novel is about the attempts of the group to stay united and survive the polar temperature that threatens their very lives. As the story unravels, we learn more about the main characters, their past and the events that shaped their current personality and attitude. It is evident that some of them hold some disturbing secrets which are exposed in the final part of the book where things get truly out of hand. It is not difficult to guess some of the twists of the plot, especially if you are a loyal reader of the genre, and the surprise element is rather weak. Jonasson has delivered some excellent samples of crime fiction in the Ari Thor series, but it seems that when it comes to his standalones he leaves something to be desired. I was also left with the same feeling when I read the recent The Girl Who Died, a mystery set in an isolated village in the north of the country. In both novels, the story seems to be underdeveloped and the characters are not plausible.

I don't want to daunt any prospective readers of Outside. but I think it's true that there are plenty of similar novels published and the Scandinavian crime fiction has certainly better examples of intriguing standalones. I would urge you to check out Ragnar Jonasson's previous work and I sincerely believe that the Siglufjordur novels are one of the most solid examples of Icelandic crime fiction to date. This novel will perhaps satisfy those whose demands are not high and want nothing more than entertain themselves with a light read. For those who expect something in the lines of the gurus of Nordic noir, it will most certainly disappoint. Its publication date is April 28, 2022 and I would like to thank from the bottom of my heart Netgalley and the publisher for providing a free ARC in exchange of an honest review. I hope that Jonasson will clean up his act and return to the grandeur of his early work in the near future.