A masterclass on the art of crafting arresting prose. 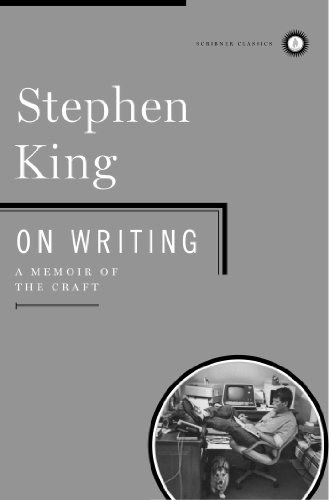 1999 was a year that marked Stephen King's life as a nearly fatal vehicular accident led to his hospitalization for a period of over a month. It was in that same year that he published his book on writing, a valuable guide for all aspiring fiction writers. The two events became inextricably linked as the popular American horror master contemplated retiring from writing after his near death experience. Nevertheless, the zest for his calling prevailed, and prompted him to introduce On Writing: A Memoir of the Craft, a book in which the author writes about his early years of childhood, the first attempts to write and publish a story, the years in college and after that the mental process that led up to his first novel, Carrie, published in 1974.

Furthermore, King offers plenty of advice to the novice writing aficionado regarding the proper way to tell a story, using the necessary toolbox consisting mainly of the grammar and vocabulary, while he dedicates an extensive part dismantling the basic elements of a novel such as narrative, description, dialogue, and plotting. He also warns the reader about the perilous nature of adverbs, the overuse of the passive voice in numerous novels that drains the vigor and simplicity from the text, and advocates in favor of a clear, definitive prose bereft of unnecessary words and decorations that serve no purpose as far as the actual storytelling is concerned. King states: "There is a core simplicity to the English language and its American variant, but it's a slippery one". Thus, omitting needless sentences helps the author to deliver a more attractive result.

King repeats over and over what he calls the "Great Commandment": "Read a lot, write a lot". You can only improve your skills in writing by reading and observing the different writing styles employed by the various writers. It is certain that once you try to weave your own story, you will find yourself imitating the author you admire and, according to King, there is nothing wrong with that: "Stylistic imitation is (...) a perfectly honorable way to get started as a writer (and impossible to avoid really; some sort of imitation marks each new stage of a writer's development)". The choice of themes and symbolism is also addressed, although King seems to think that these issues concern the second draft of a novel as in the first one the author has to write impromptu and without stopping to think about the overarching motifs of his work.

My favorite part of the book is where King makes a threefold distinction between the main parts of a story. Narration, description, and dialogue are the three foundations of every novel. The narration moves the story forward, the descriptive parts offer a sensory perspective to the reader, while the dialogue enlivens the characters. Plotting is secondary as King is ambiguous towards the concept for two reasons: "First because our lives are largely plotless, even when you add in all our reasonable precautions and careful planning; and second, because I believe plotting and the spontaneity of real creation aren't compatible". It was fascinating to read that the majority of the American author's stories were not plotted in advance, but rather let on their own to flourish through the characters' decisions that govern the action and shape the story.

In his memoir, King makes many references to the work of other classic and contemporary authors to show examples of badly written dialogue and the opposite. It is quite bold to take excerpts from the work of writers such as H.P. Lovecraft to prove how an implausible dialogue seems ludicrous to the eyes of the reader and has a devastating effect on the overall perception of a novel. King believes that the proper way to craft credible interactions is to have your ears open in your everyday discussions with the people surrounding you. Moreover, he claims that the writer shouldn't care about modesty and use profane language when it is called for. As long as you are telling the truth, nothing is wrong or irreverent. A writer should remain true to what he experiences and reflect it on page.

There are many references to William Strunk Jr.'s and E.B. White's little handbook, The Elements of Style, a small but concise instruction manual that covers all the significant parts that constitute the form and style of a text. There are chapters on the elementary rules of usage and composition, a list of commonly misused words and proper replacements, as well as an approach to style with a number of aphoristic advices on how to properly design your text, avoiding common mistakes. King gives high praise to The Elements of Style in the introduction of his memoir: "There is little or no detectable bullshit in that book (...) I'll tell you now that every aspiring writer should read The Elements of Style". I concur with the above statement wholeheartedly and buying Strunk's and White's guidebook was the best investment I could've imagined.

I tried to give an overview of On Writing, but, of course, there is so much invaluable information that I would need to write a screed to capture the numerous details provided by the author. I think that this is the best place to start if you want to pursue a career on writing and it would be great if you read it in parallel with The Elements of Style. There are several similarities between the two books and they both help you in clarifying some small, nevertheless important, misconceptions regarding the proper use of language. Apart from the purely technical parts, King intersperses his text with humor, especially in the first part, while he offers some practical tips about the best time of the day to write, stresses the importance of the setting in which you choose to work, and lists his own preferences on literature. This is a book that you should add to your library, regardless of whether you are a fan of King's overall body of work or not.