A dramatized account of Norway's biggest robbery to date.

In 2004 eight men disguised as the police special forces (SWAT) attempted to rob the Nokas Cash Central in the city of Stavanger. The tragic result of this crime was the death of a police officer who was shot while being in his vehicle and mass-panic in the center of the small Norwegian town. The movie is set on location, adding to the realistic effect while it is shot with a hand-held camera which makes the film all the more suspenseful and full of tension. We, as the audience, are watching the preparation of the heist, some hours before the actual event with the robbers making their final decisions and the police officers in the Stavanger Station being blissfully ignorant about what's about to happen. The actual robbery covers the entire second half of Nokas and is shot masterfully by the director Erik Skjoldbjærg (Insomnia, Okkupert). The actors' performances are all great, even though the nature of this film doesn't offer many opportunities to exhibit acting skills. The director states the real facts about the consequences of this crime in the end and it amazed me that 51 of the 57 in total Kroner that was stolen were never found. If you are a true crime fanatic, this is a film not to miss and the same is true for all Nordic Noir fans who are tired by fictional stories and want to watch something else. 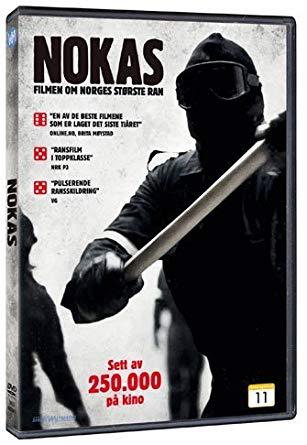