Historically accurate, though weak in the dramatization aspect.

This latest feat by director/screenwriter Erik Skjoldbjærg, known for his involvement in diverse Norwegian cinema and television productions such as Occupied, Nokas, Pioneer, and Insomnia, is a piece of historical fiction based on the true events that took place in the beginning of the Second World War and the story told is an account of the Nazi forces' first defeat in the battle field, however brief in its duration. For reasons of historical accuracy, I should mention a few things that I deem important in order for the audience to grasp the backdrop of the narrative. Norway was initially declared neutral after the outbreak of the war, a decision in parts imposed by the 1905 agreement, the year that marks the nation's independence and the dissolution of the union between Norway and Sweden, that proclaims that Norway should always remain neutral at the face of international conflict. Thus, the Norwegians at first tried to adopt a balanced position, putting the interests of the Nazis and the Allied forces in an equilibrium that would allow them to walk unscathed from the raging warfare that would ravage Europe. Nonetheless, things didn't go as planned as the Germans set in motion Operation Weserübung, a plan to invade both Denmark and Norway in April 9, 1940, capturing several critical cities like Oslo, Bergen, Trondheim, and Narvik. Five years of occupation followed and a significant resistance movement was born within the echelons of the Norwegian youth which ended after liberation that eventually came in 1945.

The reasons for the invasion in Norway are several as the vital geopolitical location and the country's involvement in the iron ore trade, a mineral of fundamental magnitude with some even claiming that it is "more integral to the global economy than any other commodity, except perhaps oil", made Hitler keen in grabbing a major piece of the nation's territory. Germany was a major importer of iron ore, much needed for the country's weapon industry, and the 85% of it was produced in the neighboring Sweden. The mineral was transferred to Germany through the city of Narvik, one of the biggest Nordic ore ports. Thus, Narvik became the center of attention for both Nazis and the British as the latter firmly believed that cutting off the iron ore supply to Germany was going to prove invaluable for the war's outcome. An atypical battle between Germany and England was initiated for the control of the precious mineral that seemed to be the key for the war industry. Whereas the Germans prevailed in the field, the British Navy managed to score crucial wins, giving hope to those who were petrified by Hitler's unhindered marching in the first two years of the war. With the country's neutrality breached after the invasion, a small group of Norwegian soldiers was sent to Narvik to keep the peace and they were the ones who planted explosives on the Nordal Bridge, which functioned as a railroad crossing, thus defeating, albeit not for long, the German machinery.

Skjoldbjærg's film is a dramatization of the period with the main characters being a couple, Gunnar (Carl Martin Eggesbø) and Ingrid (Kristine Hartgren), who, in a way, represent the reactions of the average Norwegian men and women who were called to face a complicated reality that demanded diplomacy and the employment of delicate politics to survive. Overwhelmed by the developments that eventually led to Norway's occupation by the German forces, the simple people struggled to find and adopt a certain stance which would not offend or provoke the Nazis on one hand, while offering whenever possible critical assistance to the Allies on the other. Gunnar is a soldier serving in Narvik and through his story the audience is drawn to the grim reality of the era that marked the beginning of the country's surrender that would last five years. Ingrid works at a hotel and moonlights as a translator of the German language, given her rare fluency. Ingrid will be approached by a prominent German named Wussow (Christoph Bach) and she will be torn between her newfound obligations and her fervent will to help the brewing resistance supporting the Anglo-French interference in Norway that would help pushing back the Nazis. What is made clear through the story is that, at the time, Norway was divided to those who seemed friendly to the Nazis and those actively identifying with the Allied forces cause and worldview.

The narrative has great potential as it contains a split between the two protagonists, Gunnar the hero who fights in the battlefield the foreign enemy and Ingrid who is forced to become a pawn in the German occupying apparatus. However, this capacity is for the most part wasted as the film lacks the proper tension that one would expect from a film narrating a true story set in the first phase of the Second World War and seems to have a propensity for diminishing its emotional affect by flatly placing one scene after the other in a linear chronological pattern without featuring anything that could shake the audience and force it to become more engaged with what's happening on screen. This is all the more evident in the lackluster action scenes that are devoid of edge and further convince us that this project could've done a lot better. Nevertheless, there are some fine points in the movie that have mainly to do with the realistic performances by both the protagonists and the supporting cast, observe closely Henrik Mestad's and Stig Henrik Hoff's portrayals, as well as the truthlike depiction of both the Norwegian army, not heroic or fearless, however rooted in reality and the German that is not bedeviled as an assembly of monsters, but is rather pictured as strictly disciplined and devoted to their cause.

Narvik: Hitler's First Defeat is a title that will appeal to the history lovers and especially those who share an interest in the turbulent years of World War 2. While it certainly delivers as far as imparting historically accurate information is concerned, the movie's flaws all concern the weak dramatization that leaves a lot to be desired, especially when taking into account the potentiality of the true story. It is not a film that I would recommend to everyone as it is destined to jade a major part of the audience who shouldn't begin watching if expecting a visual war epic in the likes of certain American productions. It is a not so affluent Norwegian production that lacks the capacity to lure the viewership with its apparent charismas and rather counts on the limited audience who will always watch the next historical flick no matter what. 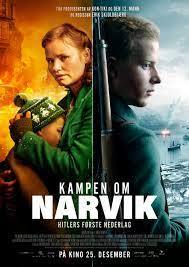