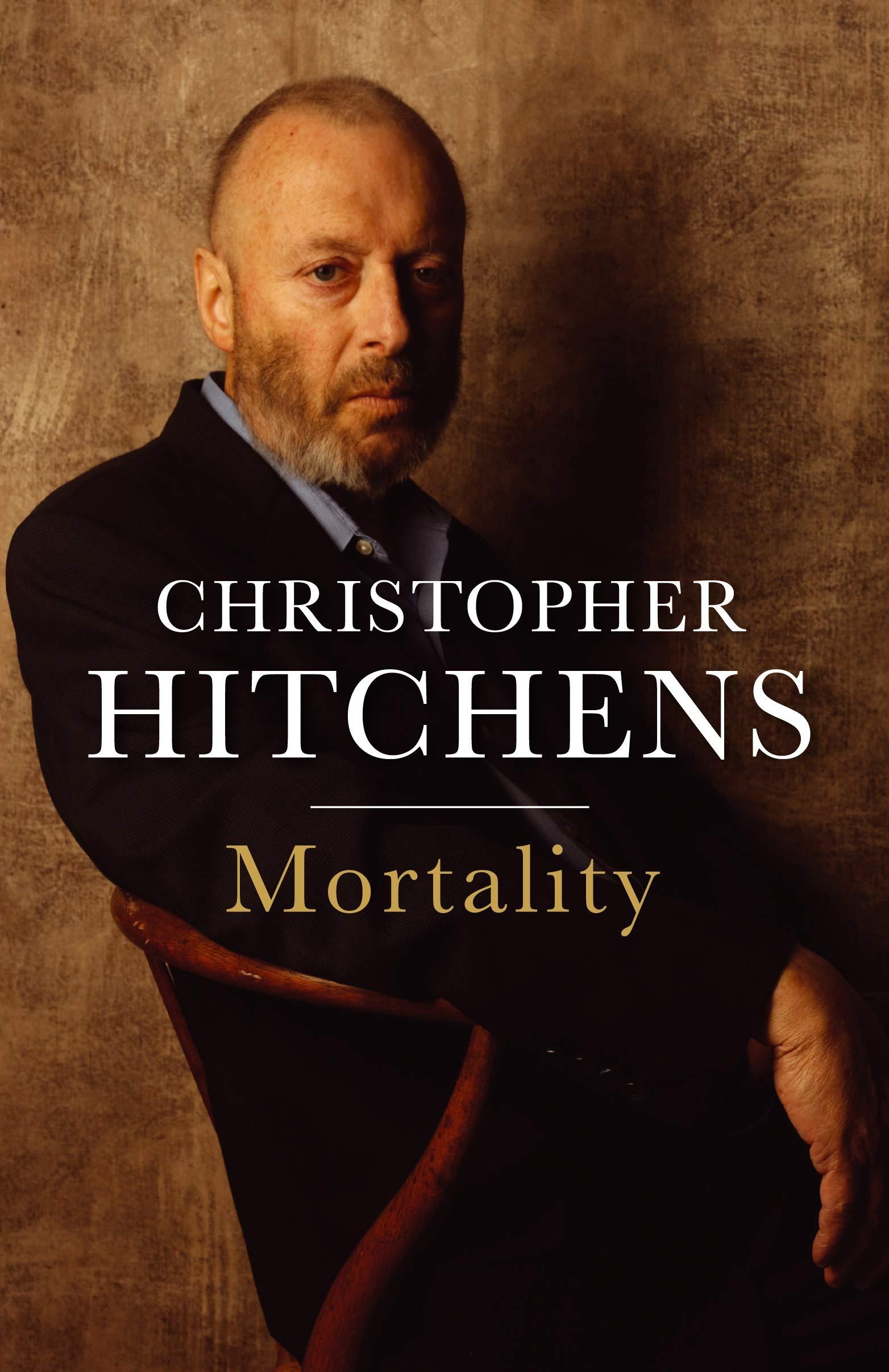 "I have been taunting the Reaper into taking a free scythe in my direction and have now succumbed to something so predictable and banal it bores even me (...) To the dumb question "Why me?" the cosmos barely bothers to return the reply: "Why not?".

Mortality is Christopher Hitchens's last testament on sickness and loss of life, while also being a handbook of how to confront terminal illness with bravery. Self-exploration and analysis become the weapons against esophageal cancer, and accompany the author during the 19 months of "living dyingly", a harsh period that nevertheless motivated Hitchens to remain active as a writer, composing the short essays presented in this small book. Hitchens is chiefly known as a prominent antitheist and his arguments have often provoked severe reactions from the opposite side, without ever letting that cloud his judgement or change one iota of his beliefs that he introduced in his most popular work, God Is Not Great: How Religion Poisons Everything. The book can be read as a vehement defense of reason and rationalism, an elegy to science which is, according to the author, the only acceptable tool in order for the man to comprehend the machinations of the physical world. His apparent distrust of religion is manifested through the stressing of the link between faith and superstition, the exposition of all religions as essentially man made, and by declaring his war against indoctrination which poses the greatest threat to the free thinking world. Hitchens was raised as a Christian, as he narrates in his powerful memoir Hitch-22, but soon started having doubts that led him to trust the scientific method of knowing things. He also was one of the four "Horsemen" along with Richard Dawkins, Daniel Dennett, and Sam Harris, a collective of intellectuals who were the founders of the "New Atheist" movement, a school of thought that aimed to expose the inherent contradictions that lie within religious fundamentalism, advocating scientific logic as the only way forward for humanity.

The book contains a foreword, written by Graydon Carter, a man who worked closely with Hitchens for several years, and an afterword that is signed by Carol Blue, Hitchens's wife, herself to a writer and a filmmaker. Mortality is divided into a limited number of chapters that each corresponds to an essay, focused on the many different dimensions of being ill and the angst that the man feels when faced with his own demise. Hitchens worked for several eminent magazines such as Atlantic, Harper's, Slate, and The New York Times Book Review. However, the English-born American journalist, author, and literary critic has made his name working for the Vanity Fair Magazine, from 1992 until his death in December 15, 2011. Hitchens was diagnosed with esophageal caner in June 2010 and in the first, and most emotional, essay, the author describes how he experienced the first symptoms of the fatal disease in the day that forever took him "from the country of the well across the stark frontier that marks off the land of malady". It should be noted that Hitchens's father had also died from the same disease, so there is a chance that his condition was hereditary. Hitchens argues that the usual use of the metaphor that wants the cancer sufferer to be "fighting" with the disease is outlandish: "People don't have cancer. They are reported to be battling cancer. No well-wisher omits the combative image: You can beat this". This view on the disease has been a subject of interest for a number of treatises (check Susan Sontag's Illness As Metaphor and Smile or Die: How Positive Thinking Fooled America and the World by Barbara Ehrenreich) that cauterize the image of the cancer patient as a warrior who can overcome the sickness by the sheer force of their will. An assumption like that means that the patient becomes somehow responsible for his condition and his potential death is regarded as a defeat, something that could be avoided if the deceased had been more courageous and positive about his predicament.

Hitchens writes that "the image of the ardent soldier or revoloutionary is the very last one that will occur to you. You feel swamped with passivity and impotence dissolving in powerlessness like a sugar lump in water". While the author is by no means a pessimist and he rejects self-centeredness and self-pity as negative consequences that should be avoided by all cancer patients, he attempts to remain within the realm of realism and describe with candor what it means to live with the disease: "All along, while burning the candle at both ends, I'd been 'straying into the arena of the unwell and now 'a vulgar little tumor' was evident. This alien can't want anything; if it kills me it dies but it seems very single-minded and set in its purpose. No real irony here, though. Must take absolute care not to be self-pitying or self-centered".. He also remains true to his former beliefs as he renounces metaphysical comfort as offered by the various religions: "And even if my voice goes before I do, I shall continue to write polemics against religious delusions, at least until it's hello darkness my old friend". In one of the essays, Hitchens responds to those who want to pray for him, underlining the futility of such an action: "The tone of the prayers replicates the silliness of the mandate, in that god is enjoined or thanked to do what he was going to do anyway". Elsewhere, he writes about the hope that new forms of therapy bring along, only to be eventually refuted by the cold reality. The disappointment and frustration that torment the cancer patients because of those false hopes is counted as one of the most disconcerting aspects of the disease. What, a cancer sufferer quickly grasps is that he doesn't have a body, he is a body, and one that turned from being an ally to being an enemy. This crucial reversal becomes evident each time that a new pain passes through the body and the patient has no other viable choice but to endure and hope that it will be gone as soon as possible: "Nobody wants to be told about the countless minor horrors and humiliations that become facts of life when your body turns from being a friend to being a foe". Later, he adds: "it's no fun to appreciate to the full the truth of the materialist proposition that I don't have a body, I am a body".

Hitchens also debates the problems that arise from the difficulties regarding the communication between the patients and the others, the "citizens of the Wellville" as the author names them. The awkwardness and the clumsy attempts at comforting a sufferer often makes things worse and thus Hitchens warns: "If you want to take part in the 'war' against cancer, and other terrible maladies, too, then join the battle against their lethal stupidity". A firm believer in the power and potential of human interaction, Hitchens's greatest fear throughout this period of almost 20 months was the possibility to lose his ability to speak or write. He defines a productive conversation like this: "The realizing that decent points are being made and understood, that irony is in play, and elaboration, and that a dull or obvious remark would be almost physically hurtful. This is how philosophy evolved in the symposium before philosophy was written down". Hitchens valued immensely the presence of friends and he was active in discussions with other writers or academics regarding a variety of subjects until the day he died. Thus, the threat of losing his power of speech petrified him: "Deprivation of the ability to speak is more like an attack of impotence, or the amputation of part of the personality". To further stress his argument, he mentions the fact that Henry James and Joseph Conrad had dictated their later novels, a feat that Hitchens describes as "one of the greatest vocal achievements of all time". Despite his overwhelming pain and worry that cancer caused him, the author retained his virtues as his wife Carol Blue notes in the brief afterword that concludes this book: "Christopher's charisma never left him, not in any realm: not in public, not in private, not even in the hospital. He made a party of it, transforming the sterile, chilly, neon-lighted, humming and blinking room into a study and a salon. His artful conversation never ceased".

Another point that draws the reader's attention is Hitchens's revise of opinion regarding some very popular, often cliched, sayings like the much quoted Nietzschean "Whatever doesn't kill me makes me stronger". The German philosopher had himself faced grave illness in the form of syphilis that led to the impairment of his cerebral functions during the last decade of his life. He also offers more examples such as that of the American Professor Sidney Hook, a philosopher of the pragmatist school, who was also tormented by various forms of weakness in his life. Hitchens wants to challenge the dominating interpretation of the Nietzschean aphorism, arguing that there is no way that an illness can truly make you stronger or wiser, except for the brief periods of lack of pain and temporary lucidity that acquire a whole new meaning and importance considered within the general context of a patient's condition. Hitchens writes about his own stance against cancer: "So far, I have decided to take whatever my disease can throw at me, and to stay combative even while taking the measure of my inevitable decline". Disease offers no opportunities for the spirit to be empowered, on the contrary, it dulls and diminishes the senses and mental faculties of the individual who has no other option but to live in a "double frame of mind as you are both preparing to die and at the same time struggling to survive". There is no actual battle to be won. There is only a protracted game of patience and stoicism that can end only with the death of the subject: "I'm not fighting or battling cancer- it's fighting me". This view may sound somehow fatalistic, but it is in fact liberating in the sense that the sufferer accepts the malady and its consequences, without that meaning a deficiency in the morale, an "unquantifiable factor in survival", which should be boosted through the adaptation and readjustment of one's personal ethos.

Mortality is not a sad book on sickness and death, but rather a resolute testament of an intellectual's final thoughts on the phenomena of life, the inevitable decline, and the eventual passing away. Through Hitchens's visceral prose, we follow the thought process of a man facing terminal disease and despite the fact that the author doesn't glamorize any aspects of his condition and makes a point against the overused metaphors of the "battle" and the "fighter", the book leaves a positive feeling to the reader due to its honesty and transparency concerning the reflection of the writer. This is a book that will be better comprehended if the reader reads it in conjunction with Susan Sontag's acclaimed work Illness as Metaphor, a precious examination of how the myths and metaphors concerning certain illnesses cloud the patients' resolve to seek proper treatment and trap them in a vortex of mystifications that further victimize them. It was a short, but emotionally demanding read and as a fan of Christopher Hitchens's body of work, I was waiting for a while to get into it. The quality of the book reflects the author's stature as one of the most prominent intellectuals supporting rationalism and antitheism and fortifies his reputation as a penetrative thinker whose boldness and integrity set an example for the future generations. If you are a fan of Hitchens's oeuvre, this is simply a must read, but it will also certainly appeal to philosophy aficionados interested in the study of death in contemporary research.