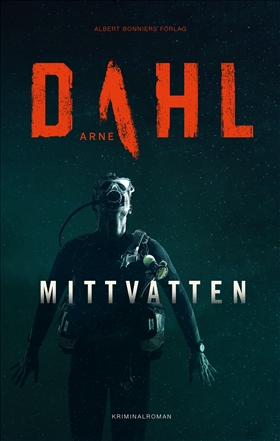 Before I begin my review of this fabulous book, I should mention that I've actually read the Greek translation (title: Πέντε συν τρία) by Grigoris Kondylis who made an excellent job in conveying the special aura and subtle nuances of Arne Dahl's prose, a task that can only be deemed as highly demanding and challenging for any translator. This is the third installment in the Berger&Blom series and, unfortunately, there is no English translation currently available. The previous two books, Watching You and Hunted, signified a departure from Dahl's usual choice of main themes and narrative style that has been established in his legendary "A-Gruppen" series of eleven books in total. In these novels, the Swedish author focused on a team of high-ranking police officers who investigated cases that involved international criminal organizations and had a heavy socio-political backdrop. There were no actual protagonists as in each book, the focus was interchanged between the members of the elite group of Swedish cops. Each novel concentrated on a different character. In the Berger&Blom series, however, Dahl shifts his writing style and delivers a more classical Nordic noir thriller that contains many of the genre's trademarks such as troubled protagonists, red herrings, a bleak setting, a plot that involves backstabbing, lies, and characters that the reader can't trust and so on. The final result is a memorable book that is better than the previous two chapters and it is a real shame that it's not available to the wider English-speaking audiences yet.

Even though it is not strictly necessary to have read the previous two installments and the book can be read as a standalone, I would urge you to do so as there is a background to both the story and the characters that is crucial to know in order to comprehend the story and the character evolution in its entirety. Both the two protagonists find themselves in terrible predicaments as Sam Berger is accused of the murder of a serial killer whom he, along with Molly Blom, chased in Hunted. Sam is now the most wanted person in Sweden and he manages to escape justice with the help of August Steen, the man in charge of the Security Service and a mentor for many Swedish secret agents. Sam is suspicious of Steen's true motives and when he is sent to a safe house in Stockholm's Archipelago, he will embark on a perilous journey to find a mole in the Security Service, a man named Carsten who has abducted a young girl in order to blackmail her father into giving him some top-secret information about an imminent terrorist attack in Sweden.

Molly Blom is in a coma in a hospital in Stockholm after being abducted and tortured in the frozen Lapland by the killer in Hunted. When she wakes up, she escapes and attempts to fill in the blanks of her memory by searching for the two people who were with her before she was taken: Sam Berger and Desire Rosenkvist. Soon she will manage to track Sam in his safe house, but neither he nor Molly truly knows if they can trust each other. Many secrets and things are being left unsaid between them that makes their relationship and collaboration more than difficult. Furthermore, Molly has a past with both August Steen and Carsten that is slowly revealed in the process of the book.

The plot is about the cat and mouse game played between Sam and Molly and the shady character of Carsten who seems to be always one step ahead and also loves to leave clues for his pursuers that are full of literary references. There are quotes from Shakespeare's Hamlet and James Joyce's masterpiece, Ullyses, that are meant to be decrypted by Sam, Molly, and Desire in order to get closer to their target and prevent the worst terrorist attack in the history of Sweden. Dahl adopts a multiple-perspective narration and we witness the story's events through the eyes of both the protagonist and the villain(s). The pace is even and the reader is left to absorb the beauty of the text without much caring about where the story is going. That doesn't mean that Mittvatten features a weak plotline, but stresses the fact that Arne Dahl's books are mainly read because of their enormous literary merit. He is one of the most prominent Scandinavian crime writers and each new book of his is an opportunity for the reader to indulge in a magical universe governed by carefully selected words. I sincerely hope that English publishers will soon realize that it is unacceptable to overlook Arne Dahl's work and translate in English more of his great novels.