A generous gift from the historical Detection Club. 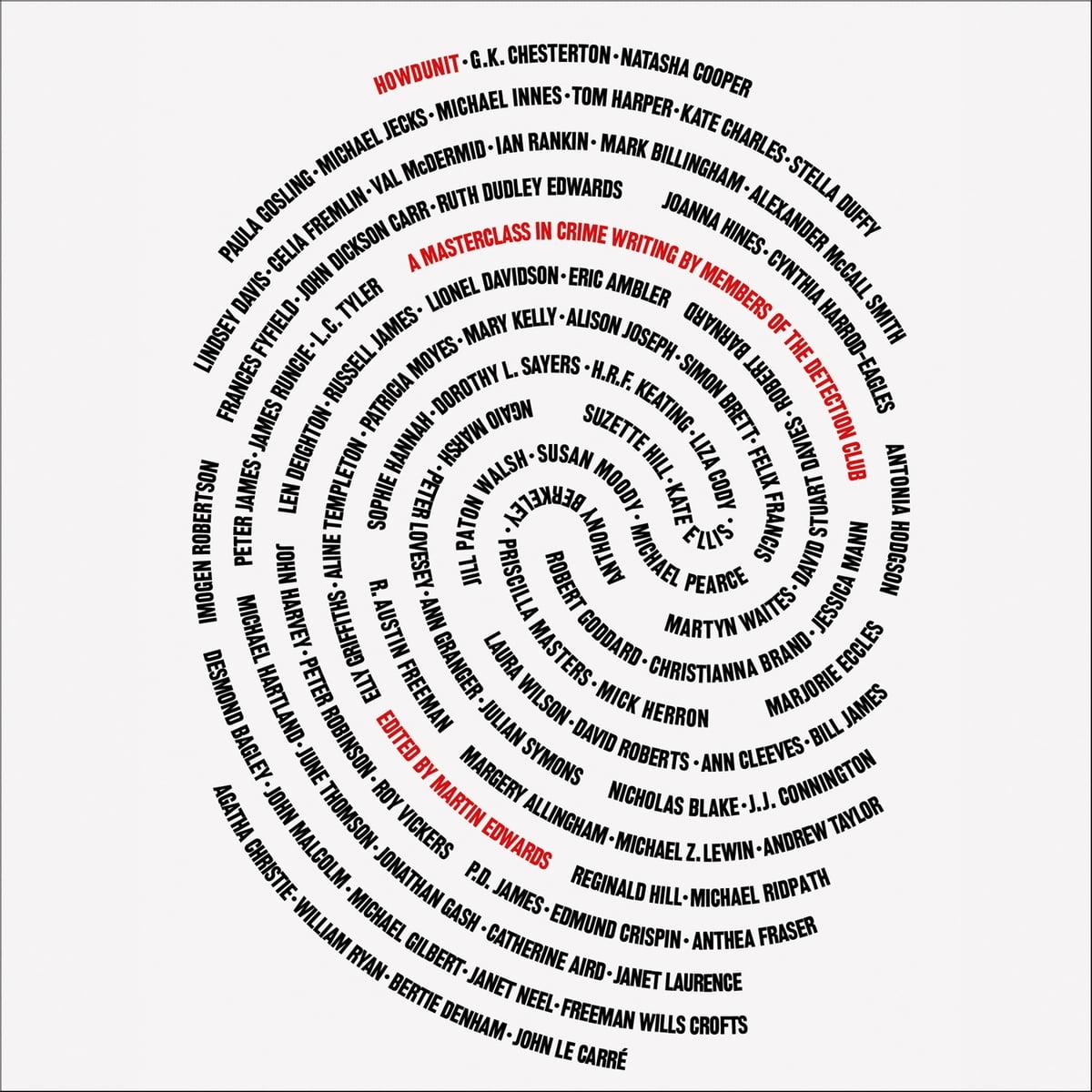 "Crime fiction is the fiction of the desperation, and growing up poor like I did, I understand desperation intrinsically. When someone is up at three a.m., the wolf’s hour, wondering how they’re going to survive—that’s a character I might want to write about. I want to create characters who are strong enough to survive the things pressing down on them." (Shawn Cosby, author of Razorblade Tears)

Founded in 1930 and with a history that spans more than nine decades, The Detection Club is "the world's oldest social network of crime writers" and in its membership register we encounter some of the leading authors of the genre, beginning with the genre's pioneers Agatha Christie, Dorothy Sayers, and Ronald Knox, and stretching all the way to our era with storytellers of the magnitude of Ian Rankin, Val McDermid, Peter James, Mark Billingham and Anne Cleeves to name just a few. In 2020, the club's ninetieth birthday, the current President, Martin Edwards, had the idea to prompt the members of the club to contribute their bit in a collection of essays covering every single aspect of crime writing such as plotting, setting, characterization, research and many others, thus offering a gift to aspiring authors and the loyal readership of crime stories who opt to be entertained by gloomy stories most often involving murder. Even though the club is consisted predominantly of British scribblers, there have been some notable exceptions such as Patricia Highsmith and Ngaio Marsh who were introduced to this exclusive, membership is by invitation-only, group of crime writers.

Edwards is the editor of the ninety short -sometimes very short- essays of several popular authors whose work won the readership's heart because of their innovative ways of storytelling, the use of special narrative tricks, and the delivery of inventive storyline, regardless of the sub-genre in which they fall under. The club has members active on classical whodunits, spy fiction, psychological thrillers, and suspense novels, thus a variety of diverging views on the subject are all assimilated in a single book, full of wittiness and insight on everything related to the creation of a decent crime novel. Edwards suggestion regarding the publication of Howdunit was warmly received by the members of the club who accepted to sideline their current projects in order to participate in this endeavor which is unparalleled in terms of the variety of authors included and length. As Martin Edwards writes in his brief introduction: "The result is not a textbook or manual; readers wishing to delve into the minutiae of police and courtroom procedure, forensic science, and the law of libel should look elsewhere. Instead the contributors offer a treasure trove of wit, wisdom, and anecdotes". While the book's focus is on present-day writing and authors, there are also some interjections by the progenitors that offer a more rounded and rooted in history perception of the subject.

The book is divided into several different chapters, each emphasizing on a particular facet of crime writing, broadly defined by the editor in order to let the authors have a respective freedom regarding the content of their essays. Thus, we have chapters named "Motives", "People", "Places", "M.O" and so on, allowing the reader to rationally organize his reading and helping him to retain a sense of order in a seemingly chaotic collection of nearly a hundred entries. Crime fiction aficionados will undoubtedly find some of their own favorite authors and it was thrilling taking a peek into the complex machinations of the writing process that have resulted in some of our all-time favorite novels of the genre. Ian Rankin, in his essay titled "Why Crime Fiction Is Good For You" discloses his thoughts on the literary merits of crime stories, arguing that the majority of the so-called "literary" novels adopt tropes and narrative structures which belong to the essential characteristics of crime fiction, and he moves a step further by saying: "If we examine the canon of Western literature, especially the novel, we find that the main ingredients of crime fiction -violence, sudden reversals, mystery, deception, moral dilemmas and so on- can be found everywhere, from the Greek epics to contemporary Booker Prize winners". The power of deduction is combined with psychological subtleties and moral ambiguities that render the genre's works timeless and always topical.

I also enjoyed Mark Billingham's take on building suspense and especially his comparison between puns and crime novels: "It may sound surprising, but, having made the move from stand-up comedy to crime writing, I quickly discovered that a joke and a crime novel work in very much a same way". The act of revelation, a significant weapon in the hands of the writers of suspense novels functions in the same way that the punchline does for a successful joke. P.D. James and Ann Cleeves offer their view on the significance of the setting for a story to take place and their arguments should be heard as Cleeves is the author of the beloved Shetland series, one of the most compelling terrains in contemporary crime fiction, a fact that became even more evident in the television adaptation of her novels. Michael Ridpath talks about "Setting Stories in Unfamiliar Places" and explains his decision to set his novels in the Icelandic wilderness. He offers many advices on how to conduct the proper research required for the descriptions to have credibility and writes about his own inquiries on the Icelandic landscape, culture, and people. I found this essay particularly enlightening as I always wondered how authors can conjure images of places which they have never visited.

Val McDermid ponders on the importance of the story that should become the "driver" for the author of any kind of crime novel. She writes: "One of the reasons for the popularity of crime fiction is its faithfulness to the idea of narrative. Crime novels provide their readers with stories that engage with their hearts and minds, but most of all, stories that make sense". The acclaimed Scottish author also stresses the importance of the structure and how crime storytellers love to mess with the linear narrative that has a beginning, a middle, and an end, sometimes by beginning their story from the finale and moving backwards, a technique that has gained immense popularity mainly through the works of psychological thriller writers. It is the writer's burden to find the appropriate structure for his story to breathe and be both plausible and entertaining to the reader. Other issues such as the use of first or third-person narration and the adoption of multiple perspective narration are also discussed in McDermid's concise essay. Kate Ellis argues about structuring the plot and the craft of plotting in general. She reveals that this is the part most difficult and time consuming in her attempt to tell a crime story and by explaining her own process of research and keeping notes that help her keeping her thoughts in order, thus resulting in a tight, engaging plotline.

Overall, I think that Howdunit: A Masterclass in Crime Writing by Members of the Detection Club is a must-buy for the crime fiction aficionados and much more for those who aspire to write someday their own novel. The essays are brimming with invaluable information gathered from the authors' personal experiences, however the book as whole is by no means didactic, in a way that promotes a certain approach to crime writing. In the contrary, it is the drastic differing in opinions that makes this a highly recommendable read as we get the opportunity to realize the versatility and subjectivity of the subject. The members of the Detection Club are not aligned regarding how they view their vocation and this diversity constitutes the cardinal message of this book. A crime novel is not written in vacuum and the text is inextricably linked with the proclivities and peculiarities of the author. This interplay between the author and his work produces the final result, the novel that cloaks its creator's soul and essence as an artist. I would also urge you to read this book because it is a great opportunity to learn more crime authors whose work maybe has fallen under your radar until now. I would like to congratulate Martin Edwards and the contributors for their solid work and I'm sure that this book will be rendered a reference point for crime fiction scholars for the years to come.