Love should come with a warning.

Anna Ekberg is a Nordic crime fiction author whose work, regrettably, hasn't been translated into English so far, meaning that the loyal readers of the genre are, until now, robbed of the opportunity to try a new voice in an otherwise saturated genre. The author's talent in storytelling becomes apparent in this first ever Netflix original Danish thriller which is based on Ekberg's novel Till Death Do Us Part (original title: Kærlighed for voksne) and showcases the original source's, which the creators of the film seem to deeply respect, merits as an intense psychological thriller touching the themes of infidelity, obsession, and marital dysfunction, exploring them with consideration and adjusting them to a narrative that aims to startle the audience with its surprises and the tautness emanating from the fractured spousal relationship between the two protagonists, Christian and Leonora. Dar Salim and Sonja Richter are the two seasoned Danish actors who incarnate the roles of husband and wife, delivering stark, plausible depictions of two radically diverse individuals whose bond hangs on a balance and is tested in extreme circumstances throughout the course of the film's runtime. Christian's impulsiveness and Leonora's cynicism and cold calculation become the two opposite poles in an equilibrium that is destined to either unite forever or destroy the couple. The outlining both of the primary and the secondary characters is typically Scandinavian, namely influenced by a long-standing literary tradition that goes back all the way to writers such as Henrik Ibsen and August Strindberg.

The movie begins with the audience witnessing a hit-and-run committed by Christian with the victim being presumably his wife, Leonora, who enjoys going regularly for a jog at evenings. In the scene that follows, we are transported back in time, more specifically three days earlier, and we watch the couple as they are asleep in their bed at night and Christian receives a text message in his mobile phone, something that puts Leonora on edge as she demands to read the words herself and she doesn't seem inclined to believe her husband's feeble explanations. Thus, from the very beginning of the film, we take a glimpse of the charged interactions that define the couple's everyday livelihood, and in that way the director, Barbara Topsøe-Rothenborg, sets up the story that will follow in terms of atmosphere while stressing the ever-present friction experienced by Christian and Leonora. In the succeeding sequences we watch as Christian meets his covert lover, Xenia, a work colleague, who pressures him into divorcing Leonora as she imagines a future that includes a new family beside the man she loves. Leonora, jealous and mistrustful by nature, soon verifies her suspicions, catching Christian and Xenia on the act of lovemaking during a business party. The next day, she confronts Christian, telling him what she saw the previous night and asks him to end his affair or else he would be compelled to go to the police and grass on him regarding some shady, illegal financial deeds that Christian undertook in the past.

During their fight we learn some more things about the personal history of each character. Christian and Leonora are parents of Johan (Milo Campanale) a frail, ailing teenager who faced several serious health issues for several years and his needs dictated some major changes in his parents' lives. Leonora's obligation as a mother to stand beside her sickly boy forced her to abandon a much-promising career as a professional musician while Christian, adhering to his duty as the man of the house and the person responsible to cover the family's financial needs, proceeded in some dubious professional actions that if exposed, they would possibly land him to prison for a long time. Leonora, proving her relentless disposition, blackmails Christian with these malfeasances, leaving him no other option but to end his affair with Xenia immediately or else he would be obliged to face justice. However, deep in his heart, Christian is not willing to discard the woman whom she loved like no other before in his whole life and hatches a plan that would both extricate him from the tough spot he is in, concerning the consequences of his illegal behavior and keep Xenia in his life. He decides to kill Leonora and resolves to do it as she goes out in the evening for her routine run. Determined, Christian drives his jeep straight into the woman running ahead and in order to be sure that Leonora is gone puts the gear in reverse moving backwards to secure the killing. Is this the end of the story? No, it is actually merely the beginning.

One of the primary aspects that deem Loving Adults a worthwhile watch is the remarkable performances by the protagonists. Sonja Richter definitely steals the thunder, with her spirited portrayal of Leonora's resentful mentality that guides her actions, culminating in a deed that crosses every kind of moral boundary. The character's cynicism is accurately conveyed to the audience through the seasoned Danish actor's coldness in the eyes and vacant expression that communicate a clearly demented persona to the eyes of the audience. Richter is a true force of nature, once again proving her massive acting talent. Dar Salim, an actor very popular both in Denmark and internationally due to his involvement in successful projects such as Darkland, Game of Thrones, and A War, delivers a convincing depiction of the stress that the extramarital affair causes to his character and his indecisiveness as well as the profound regret that he experiences over a dreadful act that takes place near the finale of the movie are evident in his restrained expressions and difficulty to hold his tears during the last sequence of the movie. There are more experienced authors framing the shiny cast such as Lars Ranthe, who holds a supporting role as a close friend of Christian's, while Mads Kruse also makes a brief appearance in the story as Karl.

The optics of the film are exceptional and the director knows how to properly utilize the setting in order to enhance the tension and the overall unnerving atmosphere that pervades the plot. The immaculate shots of peaceful nature landscapes make for a stark contradiction to the unremitting strife which occurs within the four walls of Christian and Leonora's house. There is a shocking twist that pulls the rug out of our feet right in the middle of the movie, a shocking apocalypse that upends the story as narrated until then and opens a whole new set of possibilities regarding what will follow. However, this is not the only surprise that the writers have in store and there are more astonishing developments pending until the final credits roll. Loving Adults is one of Netflix's best productions in the genre and one of the most exciting Danish thrillers of the last two years. I have to say that the movie made me curious to learn more about the author of the adapted novel as I somehow felt while watching that I was essentially reading a page-turner accompanied by moving images. The movie is an equal of a suspenseful thriller book and the aficionados of this type of literature and films will greatly appreciate it. I think that this title saved the day for Netflix as I was seriously considering of ending my subscription after a long sequence of disappointments that lasted for a while. Let's hope that this production will signal the company's return to the original spirit that earned it its reputation and acceptance in a global scale. 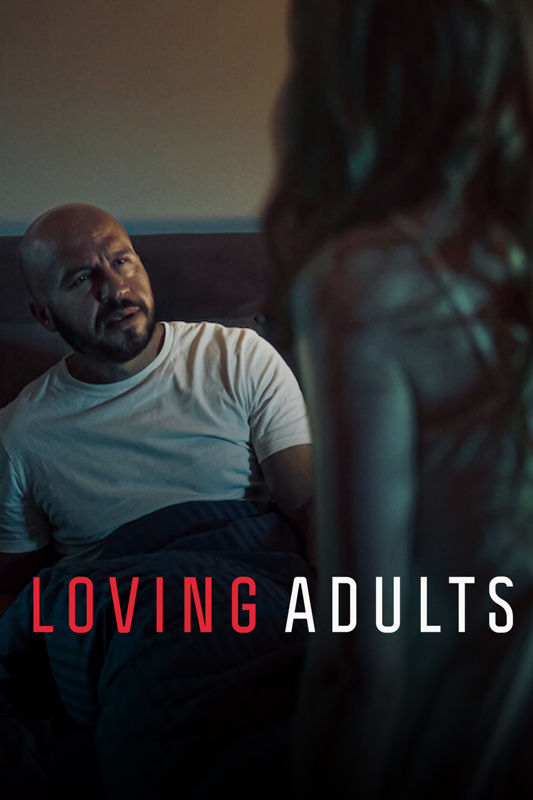