Jurek Walter is back! 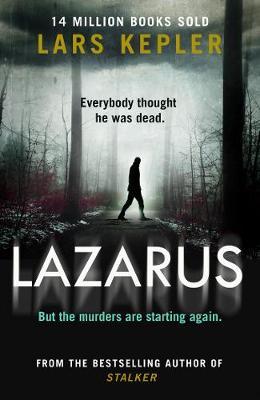 Alexander and Alexandra Ahndoril have spoiled us throughout their writing career with their fascinating, high-octane thrillers of the notorious Joona Linna series and they never fail to amaze their loyal fans with their great stories and amazing plotlines. Lazarus is the seventh installment in this great series written by the Swedish married duo and one of the best as far as plot and characterization are concerned. Furthermore, this novel signals the return of one of the most terrifying villain characters in Nordic crime fiction, the vicious Jurek Walter whom we considered dead after the end of the fourth book in the series, The Sandman. Jurek Walter, Joona Linna's arch-nemesis, was shot three times in his torso by Saga Bauer and was then carried away by the river while at the same time his twin brother, Igor, was executed by Joona in his hiding place. Even though Jurek's whole body was never recovered, we saw in Stalker (#5) that Saga has found some definitive evidence that proved beyond the shadow of a doubt that Jurek was gone once and for all. Nevertheless, as the title of this book suggests, Jurek has come back from the land of the dead to haunt and exact his revenge from both Joona and Saga.

It should be noted, for all those who are not familiar with the previous books in this series, that we first read about Jurek Walter in the ending pages of The Fire Witness, where the two authors wrote about his history and relation with the main protagonist of the novels, Joona Linna. Jurek was one cruel serial-killer who was investigated and finally arrested by Joona a few years ago. After his trial, he promised Joona that he would find his wife, Suma, and daughter, Lumi, and take them away forever. Then, he would let Joona live on knowing that he couldn't save those whom he loved most and finally he would hang himself out of despair, unable to struggle with the sadness and loneliness. Initially, Joona dismisses Jurek's threats but when something similar happens to his colleague, the police officer who assisted Joona in Jurek's arrest, he decides to make something drastic to avoid the same fate. Thus, he fakes Suma and Lumi's deaths and sends them to live abroad, away from him but safe. After the events narrated in Sandman, though, and believing that Jurek is finally dead, Joona returns to his beloved ones and reunites with them. After a while, his wife dies from cancer so Joona is left alone with Lumi.

The plot in Lazarus begins when the Norwegian police finds a murdered man in an apartment somewhere in Oslo. The police officers who are first on the scene make a gruesome discovery when they find human remains in the victim's freezer. Among them, the forensics retrieve Suma's skull which was robbed from her grave. The morbid discovery sends shockwaves to Joona who begins to doubt his belief in Jurek Walter's death. Very quickly he will become convinced that Jurek is alive and he has already found a partner to replace his dead brother who was under his total control while being alive. Soon Joona and Saga will trace more gory killings spread throughout Europe and they will become convinced that these murders are part of Jurek's plan, targeting on exacting revenge from those who killed his twin brother and got him almost killed. Joona will immediately leave Stockholm to meet his daughter, who is now studying in Paris, in Switzerland and then move along with her in the Netherlands in a secure place that only he and an old friend know about. Saga along with Nathan will have to stay in Sweden to trace Jurek and his new accomplice, a heavyset killer known as "The Beaver".

As always, the story is narrated by multiple perspectives though mainly we watch the story unfold through Joona's and Saga's points of view. It should be stressed that Saga is equally important as a protagonist in Lazarus and in this book she will have to face her worst nightmare as bother her father, Lars-Erik, and her little sister, Pellerina, are abducted and buried alive by the two villains. I wouldn't want to spoil the ending but all I can say is that the novel features a truly dark story that doesn't end well for everybody. So, you shouldn't expect a typical, generic happy-ending for all the main characters. The pacing of the story is fast and thrilling, gradually building the tension which reaches its climax in the final pages. I believe that this is the best book in the series along with Stalker.

Even though Lazarus can be read as a standalone novel, it would be better if you already have read the previous novels in the series as it would help you to understand the characters better. This is a crime novel that brings to mind the books by Jo Nesbo, Samuel Bjork and Jussi Adler-Olsen. It will make you turn the pages incessantly and satisfy you thoroughly. It is particularly recommended to those who enjoy gloomy thrillers with some great antagonists. It is also a must-read for all Nordic noir aficionados.