"The only true meritocracy is in comedy".

Written by the Indian-American actress Mindy Kaling, who is also the film's protagonist along with the always superlative Emma Thompson, Late Night is a comedy full of brio, telling the story of what happens backstage of one of America's most long-standing TV shows, the titular "Late Night", and more specifically within the closed ranks of the masculine-dominated writers room. The show's host is Katherine Newbury (E. Thompson), a British woman in her fifties who is on the forefront of the national television for the last three decades and now faces the termination of the show whose ratings are steadily declining throughout the last ten years. Bossy and authoritative, Katherine is reputed to be a woman-hater as the writers she utilizes for writing her gags are all men while her snob demeanor towards the radical changes in the media world that took place in the recent years make her seem like a dinosaur to the network's top brass. The director, Nisha Ganatra, ought to thank her lucky stars for casting an acting force of nature like Emma Thompson who makes a tour de force of the role of Katherine, being equally funny and irritating without however losing for a minute the characteristics that deem her human. The British actress's supreme set of skills shine with all their radiance and render Late Night an unmissable title.

The story is about the collision of two worlds, that of Katherine's and that of Molly's (M. Kaling), a woman of humble background and originating from a diverse ethnic environment, who is hired by the show's directors as a typical "diversity hire", a recruitment made solely for reasons of fulfilling the requirements of some -unwritten- laws dictating the abolition of racial, gender and other discriminations in professional habitat. Any hopes and aspirations regarding her new job are instantly shattered for poor Molly who has to sit in an upturned trash can in her first meeting in the writers' room with her male colleagues showing explicit signs of distrusts towards the new addition to the team. Molly's disillusionment however doesn't manage to choke her spirit and it is through her well-thought and effective ideas that the show changes tack, conforming to the shifting realities of today and remaining relevant in our times. It all seems rather straightforward, especially for a genre-defined comedy movie, doesn't it? Nevertheless what sets Late Night apart is its subtle commentary about several searing social issues while also setting questions about the nature of comedy and the mandatory skills for anyone claiming to be a comedian.

The truth about comedy is partly revealed and partly concealed in the phrase "Best comedy comes from truth", an ambivalent statement that only serves to proves how hard it is for a professional entertainer to constantly conjure new antics to keep their audience satisfied. While some might say that extracting the funny from the realm or the real seems a straightforward process, in reality the practitioner has to keep his finger on the pulse of life as manifested in all stages and aspects of life for every man regardless of their diversities. The good thing about comedy, and humor in general is that: it advocates meritocracy as Katherine states to reporters in the middle of the movie. What is funny is funny regardless of who says it. It is in that spirit that Molly shyly enforces her agency within the group of the show's writers, gradually obtaining a leading role and putting her relationship with the distant and highbrow Katherine in a whole new basis. The development of the Katherine/Molly interplay is an integral part of the, gingerly crafted, screenplay by Kaling that is furthermore brimming with themes such as the ephemeral nature of fame, the vanity of the people working in show business, how individuals with lesser talent often overshadow others of greater virtue, the hypocricy of admitting people coming from disparate class, ethnic, and gender backgrounds without ever intending to use them in a creative ways and others that you will certainly discover as you go on watching.

While naturally outweighed by Thompson's brilliance, Kaling does a terrific work in her portrayal of Molly, a witty role that demands a certain type of approach in order to work out. Of course, it helps that the actress is also the screenwriter, thus the most fitting woman to grasp the delicate, yet profound, refinements that color the character in a memorable manner. In her own words, Molly aspires to be "a splash of color on the gray canvas" of the men-dominated writers' office and it is through her unwavering persistence and the disregard of belittling comments and behaviors that welcome her in her first steps that she manages to become the rising star of the team. John Lithgow adds his experienced personal touch in the role of Katherine's husband, Walter, an emeritus professor who is suffering from the debilitating symptoms of Parkinson's disease, who never categorically contradicts or questions her wife's behavior and attitude towards her job, even if he is of different opinion. His self-appointed role is to move in the background and it is only in moments of great need that he decides to take action. Thompson, Kaling, and Lithgow form a kind of "Holy Trinity" of actors that is rarely found in recent comedies and the quality of their work is definitely one of the many reasons to watch the movie.

To conclude, Late Night is the optimal choice for those who want a good laugh combined with a clever script and facetious dialogue. There are many barely concealed motifs which are meant to probe the audience to think harder about certain realities, thus the film will even satisfy the most demanding of cinephiles. Watch it at once! 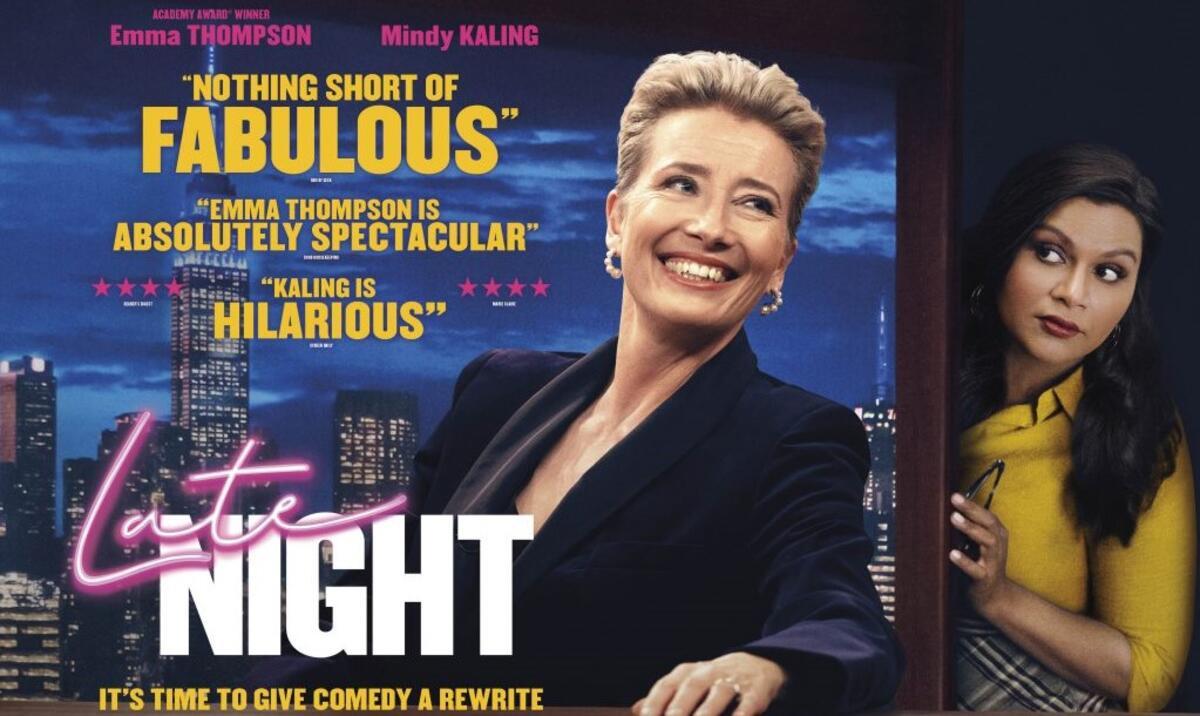