Being one of the most iconic neo-noir pictures, L.A. Confidential is based on the third installment in the brazen "L.A. Quartet" novel series, written by the American crime fiction guru, James Ellroy. The story is set in Los Angels of the 1950s where a parade of despicable characters takes place and nobody is above suspicion. Ellroy is well-known to the global readership for his uncanny ability to paint an illustrious portrait of a long-gone era and his impeccable descriptions of life in the city of angels during the 40s and the 50s make the readers feel like they are travelling backwards in time. The movie remains loyal to the original source and the labyrinthine plotline is so engrossing and dense as it is in the book. This is a high-value production that succeeds in re-creating a past reality with all its oddities and peculiarities, while at the same time casting a supreme group of acclaimed actors such as Russel Crowe, Kevin Spacey, Guy Pearce, James Cromwell, and Danny de Vito. The director is Curtis Hanson, known to the audiences for his 1992 classic thriller The Hand That Rocks the Cradle, who delivers a spectacular visual trip in time and place. It should be noted that the members of the audience who are familiar with Ellroy's body of work will be in better position to appreciate the film's exquisite characterization as some of the protagonists are recurring characters in the "L.A. Quartet" books. Dudley Smith, Mickey Cohen, Johnny Stompanato, and D.A. Ellis Lowe play a major part in the series previous volumes and their actions and overall idiosyncracy will be easier understood by those who have read The Black Dahlia and The Big Nowhere.

The main characters of the movie are Ed Exley (Guy Pearce), Bud White (Russel Crowe), and Jack Vincennes (Kevin Spacey). Exley is a young and ambitious police officer in L.A.P.D., son of a deceased ex-detective, who seizes the chance to climb the ranks when a violent incident takes place at the police station on Christmas Eve. A group of Mexican prisoners gets severely beaten by a bunch of drunk policemen in the holding cells of the Department and their nasty deed is captured in some heavily incriminating photos taken by journalists who happen to witness the event. Exley is a straight-as-an-arrow professional who accepts to grass on his colleagues because he believes that this is the right thing to do. His superiors, Captain Dudley Smith (James Cromwell) and D.A. Ellis Lowe (Ron Rifkin), promote him to Lieutenant, but Ed has to face his colleagues rage for snitching on a well-liked, elder police officer, Dick Stensland (Graham Beckel) who gets suspended from the force.

Stensland's best friend is Bud White, a hard-boiled cop who is always willing to bend the rules if that means that a dangerous criminal is going to get off the streets. He is tough and never misses the chance to use excessive violence when needed. Nevertheless, Bud has an Achilles heel; he can't resist a damsel in distress, so when Lynn Bracken (Kim Basinger), a hooker who dresses up like the popular American movie star Veronica Lake, is getting involved in a brutal case of mass-murder in a cafeteria called "The Nightowl", Bud will get dangerously close to her. One of the victims in the mass-shooting is Dick Stensland so the case involves a personal angle for White. As Bud and Lynn become infatuated with each other, the investigation of the "Nightowl" murders evolves and Lynn's pimp, Pierce Patchett (David Strathairn), seems to be entangled in a conspiracy that implicates several prominent members of the city's enfant gâté. White and Exley are sworn enemies after Ed's testimony which led to Stensland's suspension. The relationship between them is one of the strongest aspects of the story and constitutes the key to the success of the investigation.

Jack Vincennes is a corrupt cop who works in the Narcotics division and spends his free time working as an advisor for some of the most popular crime TV shows in Hollywood. He is in cahoots with Sid Hudgens (Danny de Vito) who runs a local tabloid newspaper mainly featuring sleazy sex scandals and trashy gossip about Hollywood stars. Jack and Sid often exchange information that results in a big bust for the former and a juicy scoop for the latter. After his participation in the Mexicans' beating on Christmas Eve, Jack is temporarily transferred to Vice and even though he resents working there, he soon becomes involved in the "Nightowl" investigation along with Exley and White. Even though it seems that Jack has no conscience, the audience can get some glimpses of a formerly decent man who lost his way down the road and tries to make amends for his past misdemeanors. Spacey's performance is brilliant in the most demanding role of the film and makes the audience root for a seemingly unlikable character.

L.A. Confidential scores highly on every count and the various-subplots are ingeniously intertwined as the story progresses. Racial tension is a central theme in Ellroy's work and the movie reflects the harsh reality of the 1950s when the blacks and the Hispanics were considered as threat to the peaceful citizens of Los Angeles. Furthermore, violence against women is explored and it is worth mentioning that the only significant female role is that of Kim Basinger's who is victimized throughout the film. Some may think that Ellroy is a misogynist, but the truth is that he is an author who likes to stick to the facts and dares to demonstrate the actuality of a certain historical period. Domestic violence used to be a major problem during the decades of 1940s and 1950s in America, so it is only honest to write about it as objectively as possible. There are some gory scenes that further enhance a dejected feeling to the audience, but the strength and solidity of the main storyline keep the viewer glued on his seat for the 138 minutes of the film's runtime. There is not a single redundant scene in this great puzzle and you have to remain vigilant and attentive in order not to miss significant plot events. If you are a fan of the American film-noir tradition, then this is a film that you will never forget and it makes you wonder why there is a such a shortage of modern takes on the genre. Curtis Hanson opened the road with this masterpiece of a film 25 years ago and since then I can't list more than two or three similar attempts on making a neo-noir picture. There is certainly a wide audience thirsty for such endeavors and I hope that more gifted directors will resuscitate a beloved genre. 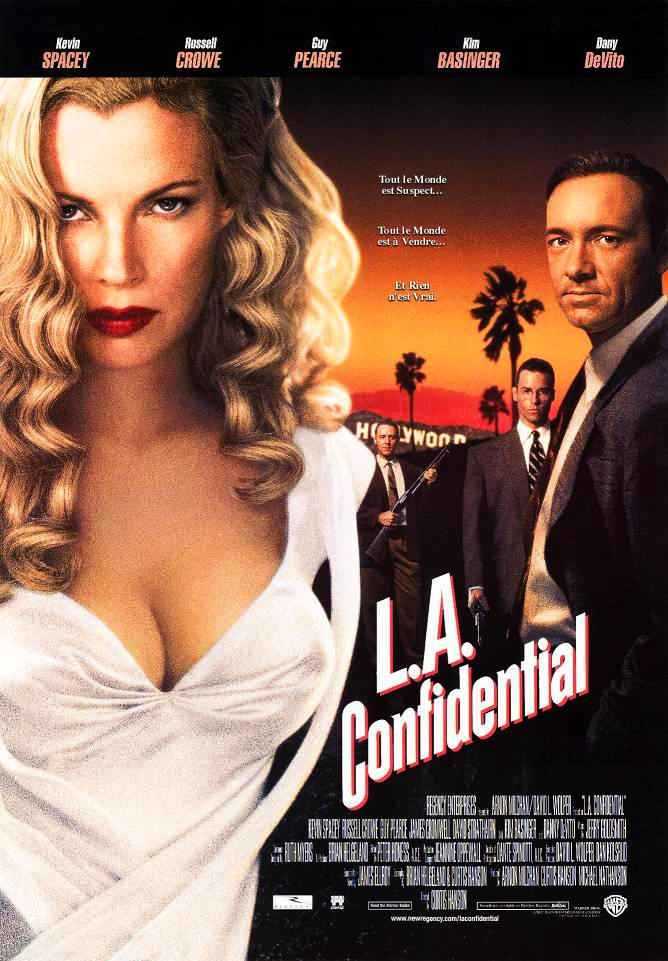