A modern twist on the classic cozy murder mystery of the Golden Age era.

Knives Out is a film that can be categorized as a classic whodunit murder mystery, in the vein of the popular novels of the infamous Golden Age of Detective Fiction era in the 1920s and 1930s, but there are plenty of twists on the genre's well-known and overused tropes that give a kind of postmodern character in the production. The movie features a stellar cast with Daniel Craig as the detective protagonist and Ana De Armas, Jamie Lee Curtis, Christopher Plummer, Michael Shannon and others in the supporting roles. The director, Rian Johnson (Looper, Star Wars: Episode VIII), creates a proper cozy mystery atmosphere while at the same time playing with the audience's expectations by twisting the already known rules and primary tropes of the genre's films.

The premise of the story is reminiscent of an Agatha Christie novel: An elderly patriarch, Harlan Thrombey (C. Plummer), a renowned crime fiction author, is found dead in his room by his maid. His throat is slit and the police investigators initially dismiss the case as a suicide. The night before, Harlan held a party in his mansion where the members of his wider family were invited. In the first few minutes of the movie's runtime, we watch one by one of Harlan's children being interrogated by two police officers and a mysterious private investigator, Benoit Blanc (D. Craig). Blanc suspects foul play in Harlan's death and he immediately detects the lies he is told by all the witnesses/suspects who seem to hold each one a motive for wanting their father dead. Until now, we are witnessing the classic build-up of a whodunit murder mystery story where every character becomes a suspect in the eyes of the viewer. But after the first 25-30 minutes, the truth about what happened to Harlan is revealed to the audience. Thus, the director overturns the genre's usual timeline which dictates that the truth regarding the murder is divulged only in the finale of the film, constituting its climax.

Nevertheless, the story doesn't lose its excitement and intrigue as we now watch as the guilty party is trying to sabotage Blanc's investigation by various means in order to shift any possible suspicion from him/her. I don't want to write anything more about the story as it would ruin a remarkable viewing experience. The film's plot is solid and unravels in an even tempo with each shot having its own importance and place on the overall puzzle. The acting by every member of the cast is impressive and especially Jamie Lee Curtis after a long time delivers a memorable as well as hilarious performance as Harlan's daughter, Linda. Craig is doing an equally splendid job in the role of the brilliant, mercurial private eye who shares some common characteristics with some of the genre's most beloved protagonists-detectives of the classical era. He is more like the Poirot-type sleuth rather than the hard-boiled detective stereotype that boomed in the 1940s and 1950s.

The element that makes Knives Out a worth-remembering picture is its great sense of humor which is expressed mainly through the quirky characters on-screen and the truly exceptional dialogue. I can't remember a single whodunit title from the past that featured such great interaction sequences between the characters. It should be mentioned that Rian Johnson is also the screenwriter of the film and he proves that his talent extends much further than directing. This is a movie for all, as I doubt that there will be many who will dislike Knives Out. It can be recommended to families too, as there is a total absence of gory images and/or profanity. It is certainly a movie that will be nominated in various categories for several awards. 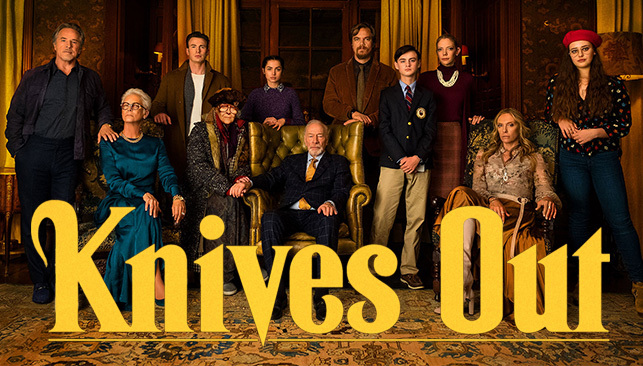